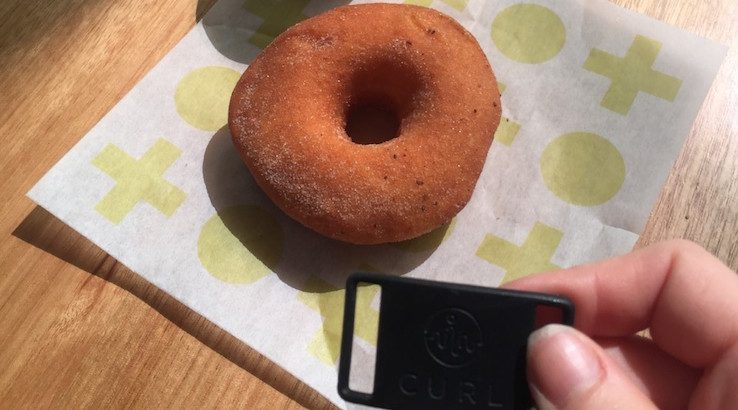 We used the Inamo Curl to make tap-and-go purchases wherever Visa was accepted and wherever we could buy doughnuts.

At finder, we love testing out new ways to make purchases. Partially because we revel in the chance to test new technology and also because we love finding ways to indulge in our laziness when it comes to contactless payments. So, when we heard that Sydney start-up Inamo was working on a new way to tap-and-go, we had to check it out.

In February, I’d already given Inamo’s WaveShades a try at Laneway Festival. The shades came equipped with a prepaid NFC-enabled chip on the inside of one of the arms, allowing you to use the sunnies to make tap-and-go purchases wherever Visa payWave was accepted at the festival. In a similar vein, the Inamo Curl is a prepaid NFC-enabled gadget that allows spenders to tap-and-go without their card wherever Visa is accepted.

This time, instead of being attached to a pair of sunglasses the Inamo Curl is a 22mm chip that you can slide inside a rubber case and then attach to your watchband, smartwatch or keychain. You can then load the Curl with up to $1,000 at any one time and use it to tap-and-go to make purchases of up to $100 wherever Visa payWave is accepted. After I caught wind of this new technology, Inamo kindly to loaded-up a Curl with 100 dollareedoos and sent us on a shopping spree to test where I could tap-and-go courtesy of the Curl. So, from everywhere from Starbucks and local cafes to Coles and parking metres, I refused the temptation to whip out my wallet and tapped with the Inamo Curl instead. I even opted to use it for necessary purchases such as new vinyl from Red Eye Records, a Chief Wiggum special of coffee and doughnuts from Shortstop and banana-themed gift wrapping from Typo.

So, how did it go? The Inamo Curl worked in the exact same way you’d expect your contactless debit or credit card to. I was able to use it everywhere Visa was accepted and never had any issues finding acceptance. Unlike the WaveShades, I didn’t have any problem with connectivity and had no need to tap multiple times for payments to be processed. Something I still need to try out is the Curl's ability to withdraw cash from ATMs.

One downside I noticed was the lack of a smartphone app. So, instead of opening an app to view my balance, I had to open a web browser to log-in and manage my Curl account. Although I could still monitor my transactions on the go, hopefully an app is in the works to make it just that little bit easier.

Of course, one of my biggest concerns was the possibility of losing the 2mm Inamo Curl and my remaining balance. However, I got some peace of mind when I realised that Inamo has a similar process to the banks for customers who lose their Curl. First, you can place a temporary block on your Curl. This means that in case you’ve left it at work or it’s slipped behind a couch cushion, you can simply enable your account and access your funds if you find it. Otherwise, if you’re fairly sure your Curl is long gone, you can close your account permanently and contact Inamo to arrange a replacement. Topping up your Curl is relatively easy too. You can make a bank transfer using the BSB 880-110 and your account number, which is the nine-digit Customer ID you’re given when you first sign up. It’ll take up to two business days for the money to appear in your account, though. So if you’re planning on using the Curl for everyday purchases, keep your eye on the balance and top it up before you bleed it completely dry.

While the Curl is currently only available for pilot testing, Inamo has plans to take it even further once it hits the market. For example, Inamo is in talks with Transport NSW about a technology called Account Based Ticketing, which will allow commuters to use their Curl to tap on and off public transport. Inamo is rolling this out on Manly Ferry at the end of March, so hopefully it’s only an amount of time before we can use it to tap off wherever we're travelling.

The Inamo Curl offers a number of perks for fans of contactless payments. As it can be attached to your watchband or keychain, it could save you time at the checkout and make for more convenient payments. Plus, as it’s a prepaid account rather than one that is connected to your debit account, it could also be used as a budgeting tool to help manage your spending. However, as the Curl is much smaller than say your debit card or smartphone, you might be more likely to misplace it than some of your other contactless payment options.

If you’re looking for more convenient ways to make contactless payments, check out our guide on four ways you didn’t know you could tap-and-go for more ideas.