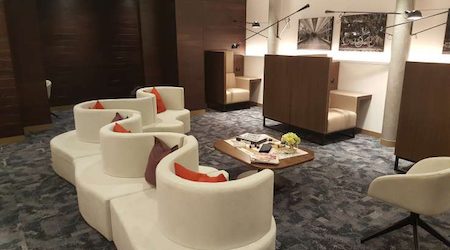 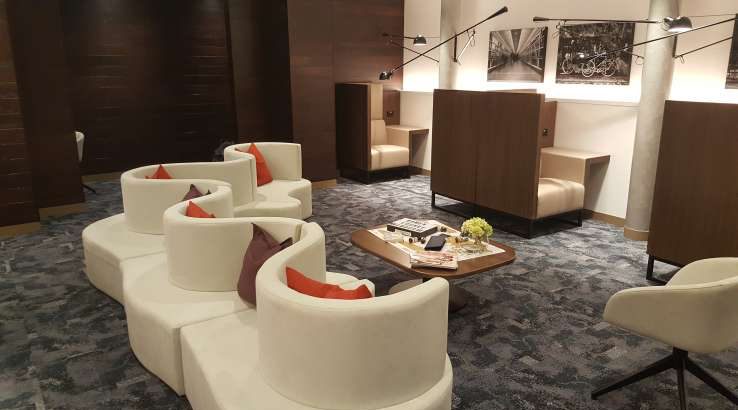 Amex cardholders can now get complimentary access to a dedicated lounge in Melbourne, while other travellers can pay to enjoy comforts in the Plaza Premium lounge.

The two lounges have been launched in partnership and are easily accessible in the T2 international terminal of the airport, alongside the other lounges there.

The American Express lounge, which is available for Centurion and Platinum cardmembers, offers a range of seating options and spaces to suit different travel preferences. For those wanting a hot meal, there are booth-style seats as well as communal tables that feature hidden power points so you can recharge your devices.

Beyond the kitchen and main eating area is a section where you can actually lounge around before your flight, with comfy couches, magazines and other amenities. Or, if you want a bit of privacy to get some work done, there are cabin-style booths along the walls in this room – as well as artwork showing iconic Melbourne images, such as Flinders Street and Southern Cross stations.

Speaking at the launch on Monday, American Express’ Vice President of Brand, Charge Cards and Experiences for Australia and New Zealand, Naysla Edwards, said the lounge builds on the company’s focus on customer experiences.

“When you look at cardmember feedback, lounge access continues to rate as one of the highest benefits of why they have an Amex card,” she said, adding that research has shown many people get to the airport earlier than needed to help reduce the stress of travelling.

The American Express Lounge comfortably seats around 65 people, although American Express expects more than 100,000 cardmembers to transit through it every year. Edwards said the size constraints are one of the challenges faced in airports and noted that cardmembers could also access the Plaza Premium lounge next door.

This lounge is similar in size but different in fit-out, with a clear difference between the American Express brand and the Plaza Premium brand. It offers three main spaces – a dining area with booths and tables, a business area with pod-like seating and runway views, as well as a small bar serving a range of Australian wines and spirits. 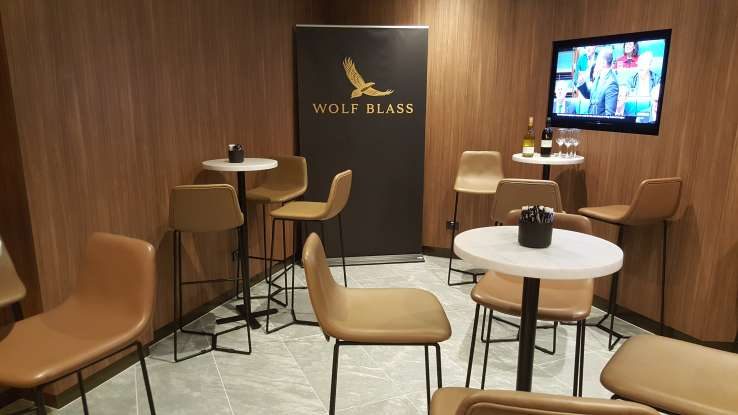 Both lounges share a kitchen, so you’ll be able to get hot meals in either space. Restrooms are also shared between the two lounges, in a corridor that has password secured doors (so you can’t go between lounges).

Plaza Premium’s Jonathan Song said at the launch that the company was focused on airport hospitality for all types of travellers.

"In our lounges, irrespective of who you might be, we have services for every type of traveller,” he said, adding that Plaza Premium was “thrilled to be working with American Express on its second lounge in Australia".

Similar to the first lounge, which is in Sydney Airport, you can get complimentary access to both lounges if you have an American Express Centurion or Platinum card, including eligible Amex Business Centurion and Platinum products. You’re also entitled to bring your children (aged between 2–17) and up to 2 guests into the lounge, subject to a fee.

The following American Express cards also offer two complimentary, single-use lounge passes per year, which you could use at this lounge:

Priority Pass members also have access to the Plaza Premium Lounge, although there may be some restrictions on food and beverages. If you don’t have an eligible credit card or Priority Pass membership, you can also access the Plaza Premium Lounge in Melbourne for a fee of $60 per person. You can also compare other credit cards that offer complimentary lounge access for more options.