Interchange fees are charged every time a business accepts a card payment – and the cost can be passed on to you as a surcharge.

Interchange fees are one of the reasons you'll pay a credit card surcharge or card payment fee with some businesses. Put very simply, every business is charged a mix of fees for accepting cards – including interchange fees that go from the business's bank to the cardholder's bank.

In Australia, interchange fees are regulated by the Reserve Bank of Australia. And to help businesses manage the costs, they have the option of passing in the cost of interchange fees in the form of a card payment fee or surcharge.

In 2013, the Reserve Bank of Australia's reforms to credit card surcharges were introduced. They were designed to end the practice of excessive surcharges for paying by credit card. From 18 March, Visa and Mastercard are limited to the surcharges retailers are permitted to charge shoppers to the reasonable cost determined by the RBA.

There are guidelines for what is to be considered a reasonable cost, but it marks a another step towards finishing the work begun in 2003. It was then decided that card schemes like Visa and Mastercard should set their own interchange fees for different card categories, provided they met an average price weighting at specific dates of review.

The 2003 reforms had implications for cardholders that extended beyond charges at the point of sale. Banks and other institutions took it upon themselves to promote products that earn them more money and the industry cut back on the bells and whistles, like rewards, that encourage people to spend in the first place.

The average merchant service fees for 2013 | by RBA:

For a $100 purchase, the average fee determined by the RBA to process the payments is;

It seems that for the banks the age old adage, every time a door is shut, a window is opened couldn’t be more true. Since then, the average merchant fees from Mastercard/Visa, American Express and Diners have steadily declined from 2003. 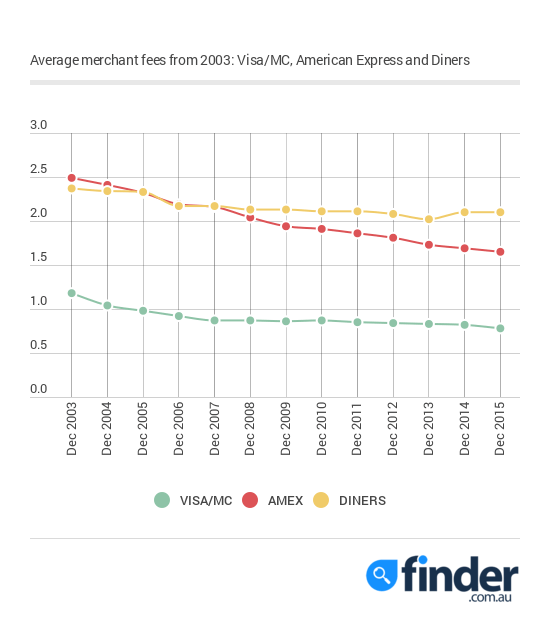 What long term effect the changes to credit card interchange fees will be, remains to be seen; however, according to the RBA’s March 2012 ‘Personal Credit Market in Australia’ report, in the ten years since the first tweaking of the interchange fee system, the brunt of the cost of using a credit card has been passed down the chain to the cardholder: here’s how.

Your rewards points are not going as far

According to the RBA, it now takes $6,000 more dollars to get the same value out of a rewards program than it did in 2003. The RBA puts this down to a loss in interchange fee revenue which for the most part was used to fund the rewards programs. And compounding the hit, annual fees have also jumped 20% in recent years too. 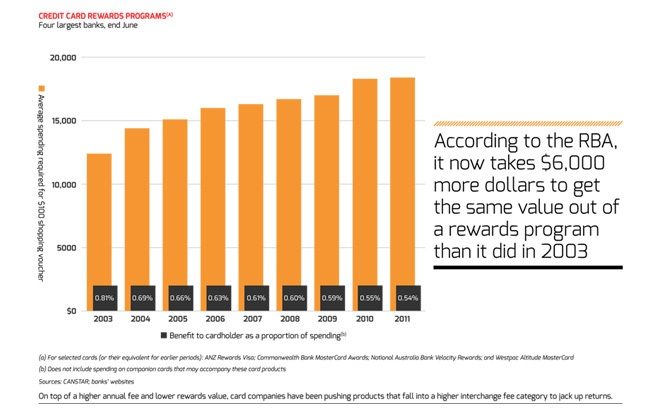 There are now more types of interchange fees than ever

There has been in an increase in interchange fee categories since the RBA reforms. Between November 2006 and 2009, the number of interchange categories jumped by more than five times the original amount.

The fees must be at or below a specific benchmark at certain dates when the categories are reviewed, but now the fees must be at the level of what the Visa and Mastercard consider to be the reasonable cost of a merchant accepting a credit card as a method of payment.

For a bit of background. Mastercard and Visa have established a number of interchange fee categories based on factors such as the type of account (e.g. consumer or commercial), the type of card (e.g. standard or premium), the type of merchant (e.g. government, charity or service station) and the type of transaction (e.g. chip, non-chip or contactless).

The result has been that although interchange categories for standard cards have been reduced, for premium and super-premium cards, they have increased. And banks have been all too keen to push these products. 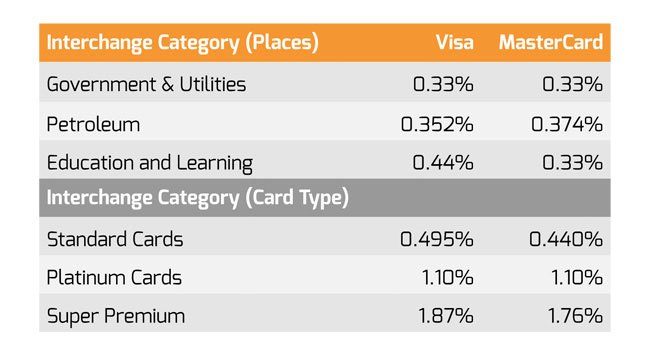 Do you like going platinum? You're going to pay for it whether you know it or not.

In 2006, both Mastercard and Visa brought in a new interchange categories for their premium and platinum cards that have a higher fee than their standard cards, up to 1.3%. Lenders replied to this by issuing more cards that they could take a larger cut from. Between 2010 and 2011, the number of standard and gold card products went down, while platinum and super premium card products increased.

Take this example: You get a platinum credit card in the mail to replace your current gold card. You don’t pay any extra annual fee, there’s a chance you’ll earn rewards faster and you get access to a range of premium benefits. It seems like a win-win, only it’s not that clear cut.

Both the Mastercard and Visa schemes attract an interchange fee of 1.10% of the value of the transaction for Platinum cards, more than double that of a standard card. The higher interchange fee is passed onto the merchant and then to yourself in the form of a merchant service fee and credit card surcharge fee.

This means that the upgrade in card, regardless of whether you asked for that card in the first place, is costing you more for every swipe. The question you have to ask yourself is: 'are the extra benefits and features offered by platinum and super-premium cards justified by the extra cost of using your card?'

What can we do about it?

Well, there’s only so much you can do about it. Interchange fees are a cost that credit cards users have to bear in some way or another. You can; however, choose a card that has a lower interchange fee category. If you can bear holding a standard card, they are a good way to go.

American Express and Diners Club have no interchange fees as they deal directly with the buying and selling parties, but you will pay an extra 1% every time you use one of these cards.
You can also sit back and let the RBA do the dirty work for you. While the fees and charges associated with using the bank’s money are here to stay, the RBA is currently in the process of reviewing these laws again and cutting back on the fees and charges that customers and business will be faced with. The RBA expects a new regulatory framework for the fee associated with electronic payment figured out by 2014.