“It’s obviously something that we regret”: Gonski and Henry defend remuneration 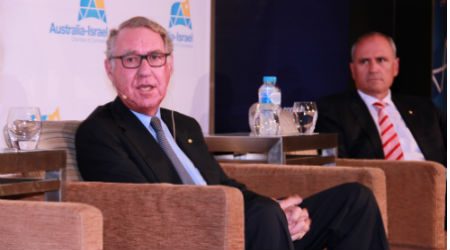 ANZ and NAB chairmen defend their bank's remuneration and staff at Sydney event.

David Gonski and Dr Ken Henry have justified ANZ's and NAB's remuneration schemes and the attitude of branch staff. Speaking at the Chairman's review, an event hosted by the Australia-Israel Chamber of Commerce, both chairmen recognised the issues surrounding remuneration but fiercely defended their staffs actions.

"I think there are a few issues here," said Henry, NAB chairman. "I go around the country talking to people that work in NAB at all levels ... Almost always, what I hear is that people get enjoyment out of improving the lives of others."

"Maybe they're trying to mislead me, but I don't think so."

"I do believe that all of us are now on notice. Whether we should have been on notice earlier is a good question, but let’s talk about today," he said. "We are looking at our remuneration structure very carefully."

"I agree with Ken that the bulk of people, they want to make a good living, but they get joy, they really do."

I do believe that all of us are now on notice.

While both focused on the ability of staff to "improve the lives of customers", Henry was adamant that assumptions about the industry are incorrect.

"There is an assumption that businesses are motivated by profit, and therefore people who work for business are poorly motivated. It’s rubbish."

The comments come not long after the parliamentary inquiry, where the Big Four bank CEOs were questioned over banking practices. A part of that discussion was around remuneration and incentives, with ANZ CEO Shayne Elliot admitting the bank had made mistakes.

"Referring customers to a specialist to have a conversation about their financial health is a good thing,” he said.

Following the payout of millions of dollars to customers in compensation, NAB CEO Andrew Thorburn admitted at the inquiry that no senior executive was terminated.

"As long as banking has been in existence, and in other professions, too there are going to be some people who don't play by the rules," he said.

Despite the defence of the bank's practices, Gonski was reproachful about past practices.

“It’s obviously something that I personally, and I’m sure Ken does too, that we regret," he said.