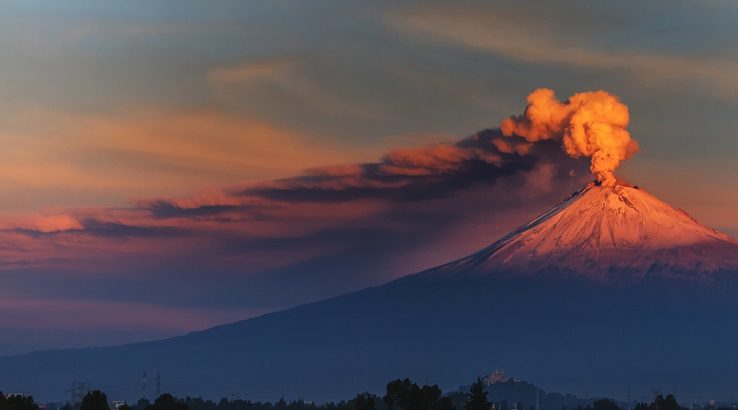 The world's volcanoes are stirring. A spate of increased volcanic activity among a number of active mountains, such as those located within the Pacific's infamous Ring of Fire, is causing headaches for locals and travelers.

Japan's Meteorological Agency raised the warning level for an eruption to Level 3 this week, restricting passage to the mountain. Authorities warn the volcano may become more active, as mountain swelling was observed.

This is the first time in six years that the volcano has erupted, shooting a plume of ash about three hundred meters into the air. These ash smolderings could spread up to 2km from the crater, the agency warned.

A local senior tourism official told the Japan Times he was concerned about the potential negative impacts stemming from the latest eruption after being "hit by cancellations of accommodations six years ago".

"I hope (the eruption) will not affect autumn viewing season," he said.

Over the weekend, more than 40 mini earthquakes and tremors were recorded on La Palma, the most north-westerly of the Canary Islands, situated 154 miles off the coast from the territory of Western Sahara, Africa.

La Palma has an active volcano, Cumbre Vieja. There are fears an eruption could occur, as government officials called in experts to examine the abnormal seismic activity, which has been labelled "a seismic swarm".

The island is home to around 86,000 residents and hosts a similar number of foreign visitors each year.

Experts from Benfield Greig Hazard Research Centre at University College London have warned that if Cumbre Vieja were to erupt, huge parts of the mountainous volcano could fall into the sea and trigger a mega-tsunami.

Published in Geophysical Research Letters, the researchers said an intensely powerful wave could form at speeds of up to 500 miles per hour and barrage the African, Spanish and British coasts, causing devastation.

Since then, increasingly frequent tremors have been recorded and a state of emergency has been declared.

Tens of thousands of locals have already been evacuated from their homes in surrounding areas and were staying, either with relatives, or in temporary shelters, sports recreation centres and shared village halls.

While no airports or airlines have altered their flight schedules to or from the popular tourist island, if Agung was to erupt, air travel across the region would likely be heavily impacted, causing delays and confusion.

The last time Agung erupted was in 1963, killing over 1,000 people and sending plumes of ash high into the air.

Earlier this month, Vanuatu's Monaro Volcano on Ambae Island in the South Pacific began rumbling to life, forcing most of the island's 11,000 residents to be evacuated by boat or airlifted to safer parts of the country.

Vanuatu's minister of land and natural resources Ralph Regenvanu recently told CNN that Ambae island hasn't witnessed a mass evacuation of size and scale since a volcanic alert was triggered 12 years ago in 2005.

A New Zealand Defence Force aerial survey of the island found the volcano was "bubbling away quite fiercely" last week, with "a lot of ash and steam and debris being ejected from the crater".

However, the government recently lowered the island's alert level from 4 to 3 after activity began to weaken.

Mexico’s Popocatépetl volcano recorded mild eruptions in September, sending a plume of smoke and steam around 2km into the air, which could be seen from the nation's capital, Mexico City, according to authorities.

The peak is located around 55 miles outside the city centre. The National Disaster Prevention Centre of Mexico reported that the eruption was the fourth over a 24 hour period, including 88 low-intensity exhalations.

The warning level remains at "Yellow Phase 2", which means ash and debris can be expected in the area.

If you took out cover before any of the volcanoes and eruptions were classed as a known event, depending on your policy, you may have provision to claim for interruptions and delays in the event of a natural disaster.

However, if you enter into a policy post-classification, travel insurers won't likely pay claims related to these events. However, this doesn't mean you won't be able to claim for situations not relating to disasters.

Additionally, many airlines will waive change or cancellation fees for customers in the event of such incidents.

If you have questions regarding your cover, it's advised you check your product disclosure statement or contact the issuer of your policy. How do you know you have the right coverage? It's best to compare your options.