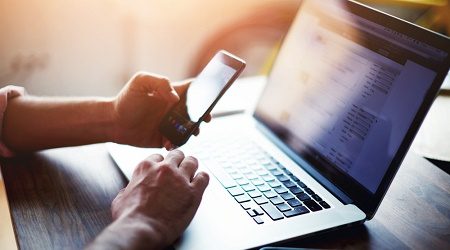 We leave heavy digital footprints but many money practices are outdated.

Removing the barriers to digital innovation is often as simple as utilising new technology. However, there are some industries that are yet to fully embrace their digital potential.

"Technology makes it possible for instantaneous payments, except that right now it takes days, or even weeks to make basic transactions. All this begs the question: why can’t money be digital too?" he said.

In the last decade alone, we've revolutionised the way we consume and contribute ideas, media, business and entertainment.

Our social lives were forever changed in 2007 with the advent of the first generation Apple iPhone. In the same year, the popularity of social networking platforms Facebook and Twitter grew exponentially.

In 2010 Instagram launched and people never looked back and as of January this year, Netflix's Internet TV network is globally available to subscribers in more than 130 countries around the world.

We tread such heavy digital footprints in our daily lives, it's difficult to understand why an intrinsically fundamental area, such as banking and finance, hasn't been as heavily disrupted or influenced by digitisation as other sectors.

Cary suggests that in this day and age it should be simple to conduct business internationally but laments that borders, both physical and digital, still hinder global activity.

"While billions of people around the world have no access to financial services whatsoever, many others are dramatically underserved by traditional banks," he said.

He's not wrong. In its latest release on the digital economy, the OECD reports that 4 billion people are still without access to the Internet.

However, the digital transformation crossed a critical threshold in 2013 as high-speed Internet reached 80% of people in advanced economies and smartphone shipments overtook conventional mobile phones.

But the OECD reports that prices of access to digital infrastructure and data, matched with concerns regarding security risks and privacy has led to discouraging investment.

Despite these deterrents, Cary said we are living through the emergence of FinTech – technology that questions traditional financial practices and provides consumers and business more choice, freedom, and access than ever before.

One of these innovations is the blockchain. Here's how Cary describes it:

"The blockchain is a transaction network that uses a distributed ledger and digital currency to settle transactions with a high degree of certainty. The network is decentralized [sic], just like the Internet, which means it’s very durable. Anyone in the world can write to the blockchain database but no one can unwind the history."

Cary says blockchains provide an open and decentralised financial transfer network whereas legacy systems rely on outdated settlement periods designed in the 1950s and expose consumers to risks of fraud and data breaches.

The popularity of these systems and the bitcoin network it supports is growing. The number of transactions on bitcoin's blockchain has been doubling every 12 months since 2012.

Cary notes that recent data from Goldman Sachs reveals 33% of millennials don't even expect to have a traditional bank account in five years.

While customer satisfaction with Australia's big four banks is still very positive, it's clear that simple, affordable and reliable financial transactions are the way forward.

"Before we can get to a world where the Circular Economy and Internet of Things are improving sustainability and driving down the costs of production, we have to have a payments network that can facilitate purely digital transactions," Cary says.

If you're interested in finance, from bartering and trades to Apple Pay, our historical guide on money explores the ways that we save and spend our cash.