Australian diets are worse than ever - finder.com.au

Australian diets are worse than ever 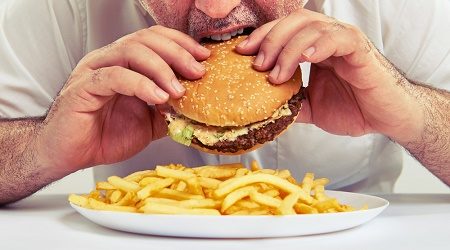 To fix the problem, people need to "halve the bad and double the good".

Despite the portrayal of a sun-kissed nation full of active, healthy eating, outdoorsy sports enthusiasts, we Australians are an unhealthy bunch.

Evidence of this is revealed in the 2016 CSIRO Healthy Diet Score report, which surveyed the eating habits of more than 86,500 Australian adults over a 12 month period.

An early snapshot of the report's findings in August 2015 revealed Australian diets scored 61 out of 100.

Since then, additional responses have dragged the score down to 59 out of 100.

The survey analysed dietary intake, nutritional levels and food avoidance and compared them against age, gender, employment and weight.

80% of respondents received an individual diet score below 70/100.

The reports suggests this figure may be even higher as there is often a tendency to under-report the consumption of certain food types.

One in three adults also admit to avoiding one or more foods, such as gluten, dairy products or meat.

In terms of employment, construction workers have the poorest diets, while public servants, real estate agents and health industry workers are the healthiest workers.

"If we can raise our collective score by just over 10 points, we help Australia mitigate against the growing rates of obesity and lifestyle diseases such as heart disease, Type 2 diabetes and a third of all cancers," CSIRO research director Professor Noakes said.

"All people need to do is halve the bad and double the good. In other words, halve the amount of discretionary food you eat and double your vegetable intake."

You can complete the CSIRO online assessment, receive your individual Healthy Diet Score and compare your results against the national average. The determination also identifies areas of dietary improvement.

While vegetarianism is now a trendy lifestyle choice, there's still an astronomically high number of Australians who don't consume the recommended amounts of fruit and veggies.

Healthy eating has often been marred by the assumption that it is more costly and uninspiring. To combat this myth, we've compiled an A-Z on eating well for cheap.