The new Australian $5 note is here And one new feature finally gives people with blindness a feel for money.

Australia makes history today, as the Reserve Bank of Australia (RBA) officially releases its "new and improved" $5 note into circulation.

But this isn't just any old bank note.

This crisp, pink sheet of plastic is the first ever Australian note that people with blindness can read.

How did this finally happen?

All praises go to 15-year-old North Richmond local Connor McLeod, who attracted 57,000 signatures of support on a petition he started with his mother on change.org.

Connor and his mum couldn't believe the Australian government and the RBA could be "so backward in coming forward with accessibility options".

The petition sought to add minute tactile markings to the upcoming currency reprint.

Currently many vision-impaired Australians use a small device to measure the size of bank notes, which vary in length by millimetres.

Australia's banknotes are printed by Note Printing Australia, which is owned by the Reserve Bank. They also print notes for other countries including Chile, Mexico and Thailand – all of whom already use tactile markings.

Innovative new security features have also been incorporated to help prevent counterfeiting. This includes the addition of a top-to-bottom window through each note.

Each bank note in the new series will depict a different species of Australian wattle and a native bird. On the $5 banknote, these are the Prickly Moses wattle and the Eastern Spinebill.

"I’m just an ordinary kid, I didn’t see myself as a campaigner," Connor said.

"But if I come across something that doesn’t sound right, I like to do something about it rather than just complain." 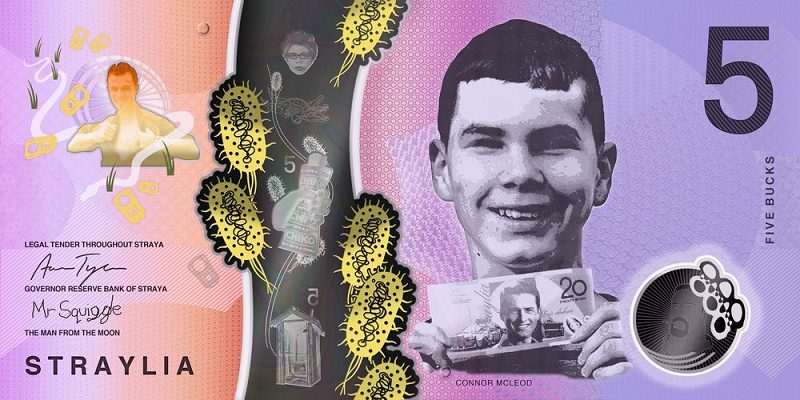 Bank notes are less common then they used to be, card payments are increasing, smartphone tap and pay is here and cash seems to be on the way out. Would Australia benefit from a cashless world?

If notes aren't your thing but you've got a spare million lying around, why not invest in some rare Aussie coins?