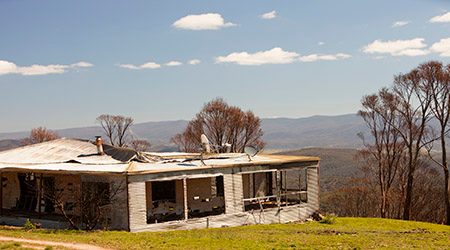 Some Aussies may have to bear the brunt of rising costs, while others are left relatively unscathed.

The cost of home insurance is rising for everyone. However, some Aussies are facing a much steeper increase than others, just because their home was built in a certain area.

Understandably, residents who live in high risk areas face higher home insurance premiums than their low-risk counterparts. It's more likely their home will sustain damage and insurers have to be certain they can cover the costs.

However, thanks to climate change, the frequency and severity of natural disasters is growing. Those already-expensive premiums are being pushed up even further and there are fears some Aussies won't be able to insure their home.

A 2019 report from the Australian Competition and Consumer Commission (ACCC) found that home insurance premiums in northern parts of Australia were nearly twice that of other areas. The ACCC identified the region's heightened risk of cyclones and flooding as a key factor.

The same report estimated that 40 percent of homes in north WA are uninsured as well as 26 percent in the NT and 17 per cent in North Queensland.

Now, with many parts of Australia still recovering following a hellish bushfire season, it's likely more regions will be added to the high-risk and high-price list.

So what's the solution?

A 2020 report by UNSW's Practical Justice Initiative suggested Australia adopt a Medicare-style insurance system for fire risk, where everyone bears the same cost of fire risk, regardless of their actual individual risk.

However, this suggestion has been criticised by others, including actuarial and analytics firm Finity, which claimed this approach is problematic.

Finity argues that sharing the cost of fire risk may encourage people to build or buy in high-risk areas, and could even undermine Australia's insurance market. Instead, the firm suggests targeted subsidies to help Aussies facing high home insurance prices.

Taking matters into your own hands

Of course, everyday Aussies aren't entirely powerless to improve their situation. Comparing home insurance online is an effective cost-saving measure and can easily carve thousands of dollars off a home insurance premium.

Earlier research from the same initiative estimated that 10 million Australian households were paying a "loyalty tax" on their home insurance, worth a combined total of $3.6 billion.

Often, insurers will offer big discounts to attract new customers, but then raise the price at the next renewal notice. Comparing providers every year is the most effective way to find - and maintain - the best price for your policy.

Could you get a cheaper deal elsewhere?

Comparing home insurance providers every year is the only way to be certain you're not paying too much for your policy.