Satellite Internet is often the best way to access the NBN if you live in regional areas of Australia.

Southern Phone offers a great value plan, with 50GB peak data and 50GB off-peak data at Standard Plus NBN speeds. That’s decent speed with a solid amount of data for you to use during normal waking hours.

Keep in mind that NBN satellite plans have time limitations - with many plans offering you a lot more off-peak data that you won’t actually use during the hours of 1am-7am.

Our "best" pick may not be the best option for you. If you're looking for something better suited to your needs, you can use our search engine below to compare more satellite Internet plans.

Remember to use our filters to customise different fields, like how much data usage you're looking for or a specific price range you might have in mind. Keep in mind that data limits for satellite Internet plans are split into on- and off-peak allowances.

What you need to know:

What is satellite Internet?

Satellite Internet is an NBN service that is mainly useful for people in rural or regional areas who don't have access to high-speed fixed-line connections. It uses satellite signals to send and receive data. The service operates via two so-called "Sky Muster" satellites that are owned by NBN, which relay signals between houses and a fixed tracking station on the ground to allow Internet access.

In order to connect to the NBN this way, a house or business must have a satellite dish installed on its home to exchange data with the satellites orbiting the Earth. Currently, satellite Internet is only offered by a small handful of providers in Australia and not by major companies like Telstra or Optus.

Where is NBN satellite Internet available?

NBN Satellite is only available to those who are not covered by the NBN's various fixed-line technologies. Anyone in Australia not eligible for fixed-line NBN will be able to access satellite NBN. There are some geographical requirements (like having no overhanging obstructions) that must be met before proceeding with installation, but your provider will discuss any issues at the time of installation.

You can find out if NBN satellite is available in your area by entering your address into our NBN tracker.

What equipment do I need to get set up?

While the technology involved in satellite Internet is complex, there are only a few pieces of equipment required on your end to get it working: 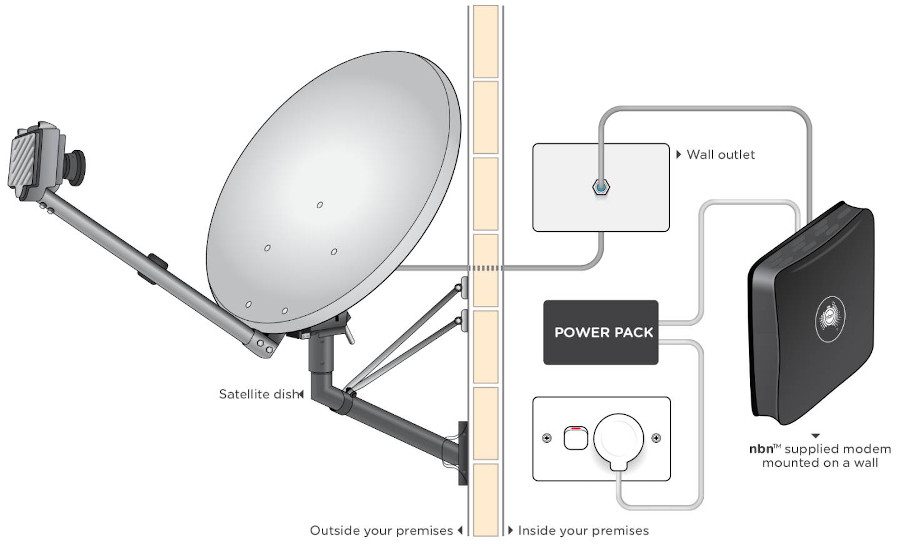 How long does it take to get connected?

So long as your property isn't particularly isolated or hard to reach, you can expect to have your satellite Internet service up and running within 4-8 weeks. In more isolated regions, you could face a wait of around 35 days, while areas that are accessible only by sea or air may take 3 months to get set up.

What's the speed of satellite Internet like compared to the NBN?

Currently, using the Sky Muster satellites, residents have access to a service with a maximum possible download speed of 25Mbps and a maximum upload speed of 5Mbps. This is equivalent to the standard tier offered by the NBN that metro-based residents can choose from, but it is a huge upgrade from previous technologies that offered a download speed of a mere 6Mbps.

Realistically, how fast your satellite Internet will actually be depends on a couple of factors, including the quality of your broadband equipment, the plan you're on and the location of your house (which determines how well it can communicate with the satellites).

No matter what, your maximum speed will be half or a quarter of what you could get with a wired connection. It's also worth noting that data limits tend to be lower for this kind of service, with satellite Internet lacking plans that offer more than a few hundred GB a month.

Sky Muster Plus is simply an upgraded version of Sky Muster, relying upon the same satellites to function but differing a little in the features offered. Where regular Sky Muster plans count everything you do online against your monthly data cap, Sky Muster Plus plans include unlimited (or "unmetered") data for certain activities. This includes general web browsing, checking your email and visiting social media, though there are some very specific limitations to what data is and isn't counted.

Here's the main differences between the two types of satellite broadband plans:

Whether Sky Muster Plus is worth it depends on whether you routinely hit your data cap and still need to access essential browsing services. It may also be worth it if you value fast speeds and can routinely access the "burst" speeds above 25Mbps.

The main reason is that the two Sky Muster satellites that handle satellite traffic have a far more limited bandwidth than the network of fibres that make up terrestrial NBN. This means they can't handle as much traffic at the same time, leading to a case where too many unlimited plans would overload the network and slow it down for everybody. Limited data plans allow the network to de-prioritise people who have gone over their limit and prevents people from being online around the clock.

What should I look for when comparing satellite Internet plans?

While you can't control the location of your house and the ability of how well it connects to the satellites, here are a few things you should consider when comparing NBN satellite plans:

Is NBN satellite the only option for me?

The good news is that there may be other alternative to satellite NBN, so long as you have enough mobile network coverage. A huge number of rural and regional areas enjoy mobile coverage thanks to Telstra and, more recently, Optus.

With mobile broadband, you'll be able to get data via the regular mobile network, and it could potentially be easier to set up and faster than what satellite Internet can offer. There's still a decision to make, though, because mobile broadband works out to be much more expensive for the same amount of data. It might only be worth it if you don't use the Internet much or you can stomach the extra cost.

You can use Telstra's network coverage map or Optus' map to check whether you're within their coverage area.

Who are the NBN satellite Internet providers?

Whilst the major telco networks don't offer NBN satellite Internet plans, the following providers do have a variety of plans available:

Is satellite Internet a part of the NBN?

Yes, satellite Internet is still part the NBN. It's usually best suited for people in rural or regional areas who can't get access to normal fixed-line options, but still want a high-speed connection.

What's the difference between fixed wireless and Sky Muster Satellite?

What happens to my home phone connection?