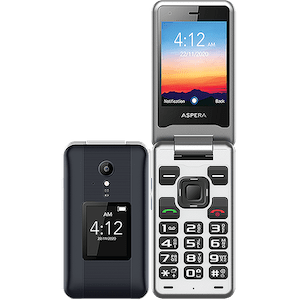 Aspera's offered a number of feature phones with a flip phone form factor and its latest is the nice looking Aspera F42. Clearly in 2021, a feature phone isn't going to be for everyone, and while it's well priced for its likely market segment and will meet most of their needs, it's also very cheaply built and rather slow, even for basic phone functions. 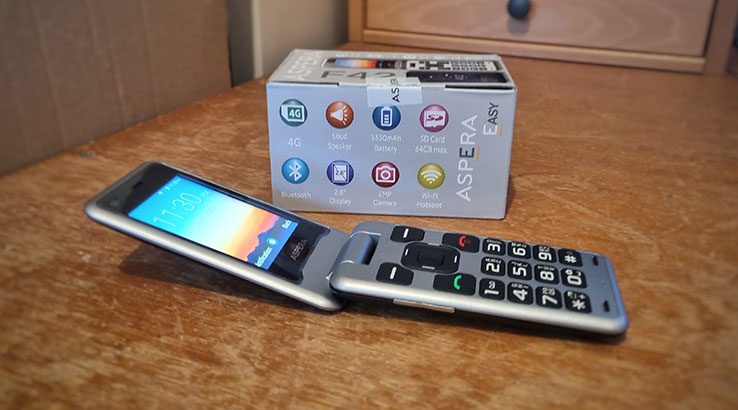 The last Aspera feature phone to pass through Finder's testing labs was the Aspera F40, and it's not hard to see a lot of similar design DNA in play with the Aspera F42.

Like its predecessor, it's a flip phone built out of light plastic with an internal and external display, although that external display is fundamentally just a clock and notification indicator panel. This is not a foldable phone in the sense of the Galaxy Z Flip, but you shouldn't expect that at the Aspera F42's price point.
Aspera describes the F42's colour scheme as "titanium with a silver background", but you could more simply and accurately describe it as black and silver. It's entirely fine for what it is, because in 2021 it's simply more unusual to see a feature phone in action than it is to comment on its style or colouration.

The primary display is, as feature phones of old tended to be, simply a display screen with any action taken via the soft rubber buttons on the lower body of the phone.
I can entirely appreciate that there's a market for people who want or need larger buttons, and that's something that the Aspera F42 definitely has. However, this is also something of a trap, because the actual response on those buttons isn't particularly good or responsive.

As such, you can sometimes need to stab at a number key or direction a few times before the phone actually realises what you want to do. If you're buying a large button phone because you need those larger strike zones, it's likely to be a little galling to have it fail to respond to your inputs.

One feature that was present – and very welcome – on the Aspera F40 that's now missing is the dedicated SOS button. This let you define an emergency contact to call with a press on a rear-mounted button, which could be very handy for many older Australians. 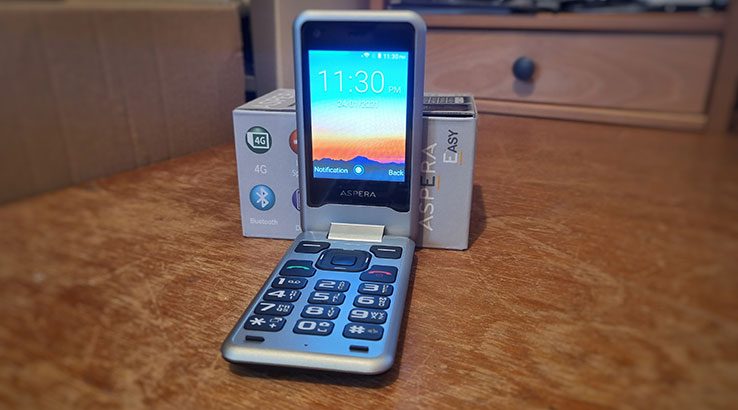 I wasn't entirely excited by the camera on the Aspera F40, so I was rather primed for the Aspera F42 to deliver less-than-stunning results.

What I didn't expect was that despite being a newer device than the Aspera F40, it would actually have a camera that was both technically worse and actually worse.

The Aspera F40's rear camera was only a 5MP model, but for the F42, Aspera's saved a few bucks by dropping it to just 2MP at the rear. You do get a front-facing "selfie" style camera in return, but it's only a 0.3MP sensor.

You can sometimes get some interesting practical effects out of low-res cameras if you like that style, but you'd really have to work very hard indeed with the Aspera F42 for that to work for you. Launching the camera app is slow, focusing is slow, capture is slow… you get the picture.

Or more to the point, you really don't. There are reasons to opt for a feature phone if that's what you want, but if you in any way want to take pictures that you'll be proud of, don't try do so with the Aspera F42. 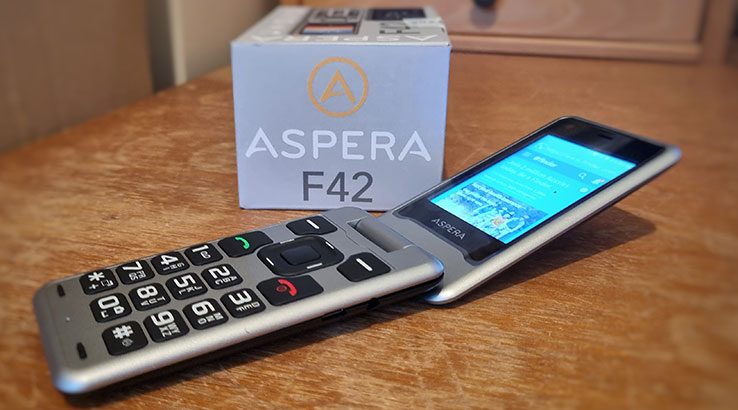 The Aspera F42 runs on a forked version of the open source parts of Google's Android operating system. Not that this really matters beyond technical curiosity and in those situations where you might want to pull photos off the phone, however, because the actual user interface is mostly built around a simple three-column row of icons for all of the available apps.

At a technical level, Aspera advises that the Aspera F42 has just 512MB of RAM and 4GB ROM, which is actually sort of spacious for a feature phone if you look back at what they used to offer. You can expand that storage up to a maximum of 32GB via microSD card, although I'm not sure how many of the Aspera F42's target market would be likely to bother.

Most feature phone buyers are more concerned with call quality and ease of use for telephone functions, and there beyond the slightly squishy keys and responsiveness issue, I've got few complaints. The Aspera F42 can get nicely loud if you have difficult hearing softer phones, and if you're familiar with T9 predictive text it's possible to ping out SMS messages too.

The Aspera F42 does reach a little further than this with the ability to browse the web, Facebook or WhatsApp via dedicated apps for each.

As is typical of feature phones, this can be a rather slow process, partly because simply entering a search query in the browser can take time, but also because the underlying Android features of the phone assume details like touchscreens and higher resolution, which means that some UI elements on web pages don't actually render all that well on the Aspera F42's tiny screen. Scrolling down a web page will involve multiple stops as the phone struggles to render details, and unless you're looking straight on at the phone, the backlighting will quickly wash out nearly all detail.

The Aspera F42 will only go online if you either have a data provision on your mobile SIM or if you connect it up to Wi-Fi. Again, connecting to Wi-Fi is a tad slow, but the big benefit here is that you can use the Aspera F42 as an ad-hoc mobile hotspot. It won't be fast – it's only 4G capable at best – and it'll sap the battery, but this was a feature that (for example) Nokia stripped out of the similarly cheap Nokia 225, despite its presence in previous Nokia feature phones. 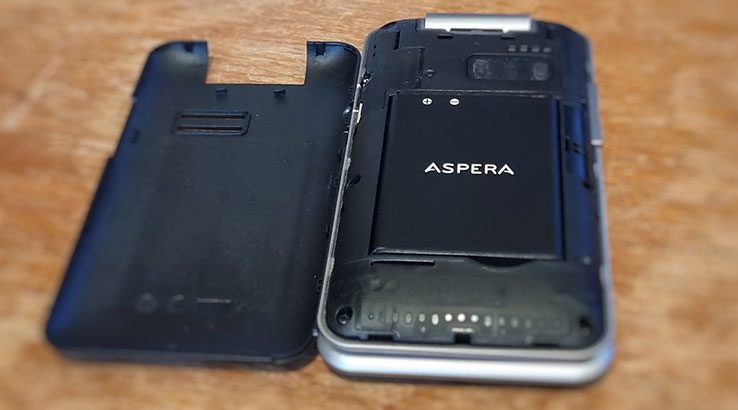 It's not a particularly large battery at just 1,350mAh. Again, it's weird to note that the earlier Aspera F40 had a 1,600mAh battery. I've no idea why you'd drop battery capacity like this in a newer phone. Aspera doesn't list expected battery life for the Aspera F42 on its website, but the manual does note that "the expected battery life on a full charge of the Aspera F42 is three days standby, or a day with moderate usage of the phone".

For a smartphone, that would be a good figure, but most feature phone users would expect a little bit more than that. Use lots of data-heavy functions – or utilise the mobile hotspot feature – and you can expect the Aspera F42 to run out of power before a day is up. Obviously one person's "moderate" usage could be another's "heavy" usage in this context, and the Aspera F42 isn't built to be a powerhouse phone. Still, it feels like it could push harder than this.

Should you buy the Aspera F42?

Finder score: 1.5
How we score our reviews

As a basic feature phone, the Aspera F42 certainly ticks the requisite boxes. It can take and make phone calls and SMS without too much fuss, and it's not bulky in your hand or in your purse.

However, even within the smaller field of feature phones, it feels lacking. The camera being ordinary is something of a given in this field, because it's the simplest way for phone makers to keep their phones cheap. However, the battery being mediocre isn't something that most feature phone buyers would welcome, and it's downright weird that the successor to the similarly inexpensive Aspera F40 would actually end up being a worse phone.

The Aspera F42 retails in Australia for $99.