Property prices have fallen, but is housing affordability really improving? 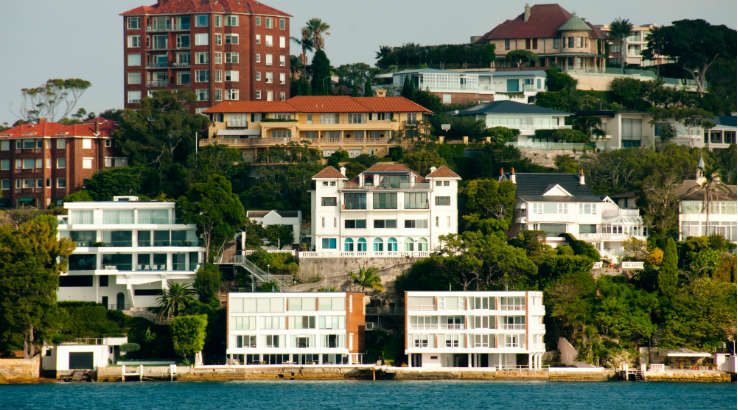 The latest pricing data says yes, but experts say it's not that simple.

In October 2017 towards the height of the property boom, the median price for Sydney property was $905,917.

Lower prices mean better housing affordability, right? The answer is yes, but it's a bit more complicated than that.

"Housing affordability improves as prices fall however, the declines need to be put in context," says CoreLogic research analyst Cameron Kusher. "In Sydney for example, values are down -13.9% from their peak, values have still increased by 23.3% over the past five years. It is a similar story in Melbourne where values have fallen by -10.3% from their peak however, they are still 25.5% higher over the past five years."

And price are having some effect. "First home buyers as a proportion of all loans peaked in November last year," says a Bank of Melbourne spokesperson, "but this has since eased, suggesting that first home buyers are still not so willing to enter the market... First home buyers are also perhaps deterred by ongoing negative sentiment with expectations of further falls. But we also need to remember that prices are not the only factor impacting affordability; interest rates and incomes also play a part."

It's not all a story of price falls either. In cities like Adelaide, Brisbane and Canberra property prices haven't budged as much. In Hobart they've soared.

What do the experts say?

Mortgage Choice Chief Executive Officer Susan Mitchell agrees that "affordability has improved with regard to the cost of dwellings". But while buyers may only need to save a smaller deposit now the "tightened lending environment which developed throughout 2018 has made it more challenging to secure a home loan".

Metropole's Michael Yardney, who helps Australians buy property, echoed those sentiments. "Banks' tighter lending criteria are making it harder to prove serviceability for home loans. At the same time, the deposit gap is creating an issue for many first-time buyers who are having difficulty saving up sufficient deposit to get a foothold into the property markets."

And even in cities where prices are in free fall, they're still dropping from a very great height.

Every city is its own property market, and the story in regional cities is also very different.

Head of Economic and Market Research at Bendigo Adelaide Bank David Robertson says, "There are certainly a lot of disparities within each city. And also in high rise versus detached dwellings. I think in Brisbane the high rises have been doing a bit worse whereas in parts of Melbourne high rises have been better than detached dwellings. So it's dangerous to make sweeping statements."

Robertson also notes that people are moving to regional areas, which are cheaper than the big cities but have in many cases been performing well in price terms.

"If we're talking about affordability and if there isn't much of an improvement in living standards and wages growth then regional Australia is part of the solution. If you look at the ABS data on interstate migration people are voting with their feet. The NSW population went backwards last financial year and Queensland, Victoria went forward."

Areas of regional Victoria like Bendigo and Geelong have been particularly strong markets, often representing better value than the bigger cities in price terms but also future growth prospects.

To get a clearer idea of housing affordability we crunched some basic price data.

For each example we will assume a 30-year principal and interest mortgage with a 20% deposit. We'll keep the interest rate to a competitive 3.59% variable rate.

With the same loan details that gives us:

CoreLogic median values from December 2014:
And from the most recent data in March 2019:

Using the same 30 year loan with a 20% deposit and a 3.59% interest rate, the differences are striking.

Prices in Adelaide, Brisbane and Canberra haven't seen the same decline. While these markets may not be growing much at present, median prices haven't really fallen.

"It is likely for prices of some properties to fall further before our property markets bottom out," says Michael Yardney. "However, price declines will not be uniform across our many property markets, with the value of well-located homes and 'investment-grade' properties holding up better than secondary properties in poor locations."

Susan Mitchell from Mortgage Choice says, "If dwelling values fall further, particularly in the nation's capital cities where median dwelling values are the highest, it may take the pressure off Australians currently saving for a home deposit who may not need to save as much."

But she adds that "dwelling values are still at record highs in many parts of the country, so it remains to be seen how much further dwelling values would need to fall in order to significantly improve affordability."

David Robertson agrees that wages are an important part of the equation. He says it's worth paying close attention to the Reserve Bank data on housing costs to income ratios. "And those have definitely come down in the last year and a half. But the lack of wages have been fairly problematic. Wages have been increasing. They just haven't been increasing at a rate that we were used to a decade ago."

In short, property is getting more affordable in many places, but it's a complicated story. If you're a first home buyer you're probably in a better position than you were two years ago. But that doesn't make it easy.

Here are some basic steps you should take: