The interest rate on a rate tracker mortgage moves up and down in line with the official cash rate, so could this unique type of mortgage be right for you?

What are tracker mortgages?

Emma Lockwood, finance broker from Emma Lockwood Finance, says this fixed “bottom-out” rate is a common feature of rate tracker home loans. “Tracker mortgages give the consumer direct access to the exact changes to the RBA rates, generally within two business days of the RBA announcement. This movement is applied directly to the standard variable rate, either moving the rate up or down equally,” she says. 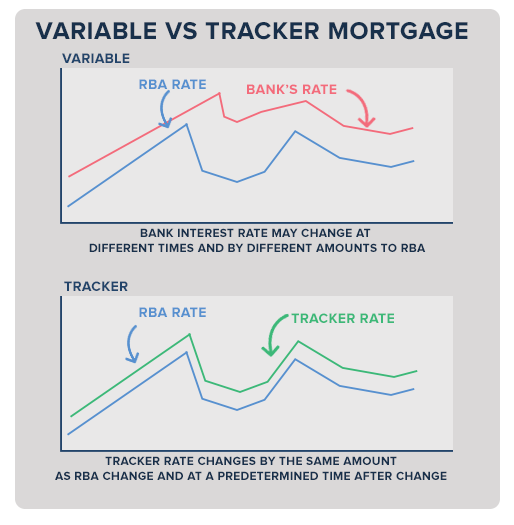 What are the benefits of tracker mortgages?

The main advantage of a tracker mortgage is that you can take advantage of any interest rate cuts as soon as possible after they are announced. “Tracker mortgages offer the consumer quick and exact access to any rate cuts – this is helpful for people who are very conscious of cash flow but do not want to lock into a fixed rate,” Lockwood says.

What are the disadvantages of tracker mortgages?

As always, it’s important to shop around to find a loan with a competitive interest rate, minimal fees and the features you want.

There’s a misconception among some home loan borrowers that all variable rate mortgages move up and down in line with the RBA’s official cash rate. However, this is simply not true.

“Most variable rate home loans with the larger lenders and banks will move when the official cash rate moves, but their movement is often not to the full extent of the official cash rate’s move, especially when the movement is downwards,” Wilson says. “There are several reasons for this, with the major banks often quoting ‘increased lending costs’ as a major cause for not passing on the full rate cuts.

He gives the example of the August 2016 rate cut where the RBA reduced the cash rate by 0.25%. “This cut was passed on only in part by all four of the major banks with Commonwealth Bank reducing their standard variable interest rate by 0.13%, Westpac reducing theirs by 0.14%, ANZ reducing by 0.12% and NAB’s reduction being only 0.10%. In this instance, both Commonwealth Bank and NAB quoted higher funding costs as part of the cause with increased capital requirements and shareholder returns also to blame for the partial reductions,” Wilson explains.

Lockwood points to the increasing costs of funding (where the lender gets their money from) and regulations as reasons why lenders do not always pass on the full amount of the rate cut. “Lenders are not only responsible for passing on the best rates to the consumer but they also have a responsibility to the shareholders and to keep in line with other regulations,” she says.

Some lenders will pass on different rates cuts to owner occupiers and investors based on the findings of RBA trends, or they may increase term deposit rates instead. Some smaller lenders provide variable rates that do not move at all with the official cash rate, but rather move only when the lender’s funding line moves. “These loans affect only a small portion of the population and are usually for home loans that don’t meet the standard requirements of the major lenders,” Wilson explains.

Although quite rare in the current Australian lending market, rate tracker mortgages are actually quite common overseas, including in the UK and Europe. So why have so many Australian borrowers never heard of them?

“NAB offered a similar rate tracker product several years ago to the Australian market when there was a lot of unease about the major lenders not passing on the full RBA rate reductions, so it is not a new concept to Australia but it is rare,” Wilson says.

“One reason for this is that, as NAB CEO Andrew Thorburn stated, tracker mortgages are fixed to an interest rate that the banks do not fund from. Despite common belief in the marketplace, the banks do not borrow money from the RBA at the official cash rate. The banks have many different lines of funding internationally, none of which are directly linked to the RBA official cash rate.

“This means that as the RBA cash rate is decreasing, the banks funding costs may be increasing and this would leave the bank in a worse position for its shareholders or, in an extreme case, could leave the bank in a dangerous position with the loans costing more than they are able to charge for them – which is why it has typically been an unattractive option to offer in the past, from the banks’ perspective.”

Meanwhile, Lockwood points out that Australian borrowers are fortunate enough to enjoy easy access to qualified mortgage brokers and lender information, providing the ability to choose the best products from all lenders. “Rate tracker mortgages are rare in Australia as our consumers are not always driven by the rate. It is a collection of all the other product features such as offset accounts, physical and technological presence of the lender, other fees of the lender and the ease of use for the consumer,” she says.

Will we see more rate tracker home loans in the future?

Now that Auswide has reintroduced tracker mortgages to Australian lenders, can we expect more lenders to follow suit? Lockwood says that lenders will keep an open mind and review the success of the first lender’s attempt before committing to this type of product. “Rate tracker loans are very successful when rates are dropping or low, however do not have the same benefit for the consumer or the lender when rates start increasing, so the banks will always be watching out for the bottom line long term when creating new product lines,” she says.

Of course, in Australia’s competitive lending market, if there’s enough demand for a product, there will likely be lenders willing to offer it. Wilson says that we can expect other banks to introduce rate tracker products.

“The major banks won’t want to lose market share so they will have to create a product to compete. Also, within the government’s banking inquiry [House of Representatives Banking Inquiry, October 2016] there was a strong focus towards tracker loans, so there is now an expectation from the government and general public for the banks to start providing tracker loans for their customers,” he says.