FTTN: What is it?

Fibre to the Node (FTTN) is one of the many different NBN technologies available that gets your house connected to the Internet. Unfortunately, it's also one of the least popular NBN connection types.

How to switch NBN providers
What’s a good NBN speed?

Why is my NBN so slow?
What to do in an NBN outage

You don't get to choose which NBN technology type gets hooked up at your house. FTTN is one of these connection types, but it's also not the most liked.

The way that FTTN has been built means that the speeds you'll get on an FTTN NBN plan are usually going to be lower than advertised.

So how does FTTN work? Why is it slower than the other connection types? And what can you do about it? We're here to answer your questions.

How does FTTN NBN work?

Unlike FTTP (Fibre To The Premises) NBN which uses a full fibre connection direct into your home or business, FTTN (Fibre To The Node) uses a combination of technologies to deliver broadband to you. As the name suggests, the optical fibre portion of an FTTN connection only extends to a node located near a group of properties. From there, the copper lines already in place for your telephone and ADSL broadband will be used to deliver the final connection for your internet access.

The advantage to this approach is that because the copper is already in place, the level of engineering works is reduced, giving a theoretical faster build time. That has to be placed against the highly variable quality of the copper in some situations, as well as the different power consumption of an FTTN connection compared to a pure Fibre connection.

What’s key here is that you won’t have a functional choice at first between FTTN and FTTP; the technology that’s provided to your address is decided by the planning that nbn co has already undertaken. There has been some talk of customers being able to pay for the "last mile" copper in an FTTN connection to be switched to full fibre, but early suggestions around this look like being an extremely expensive proposition. To determine which technology your house or business will have access to, have a look at our NBN rollout map. 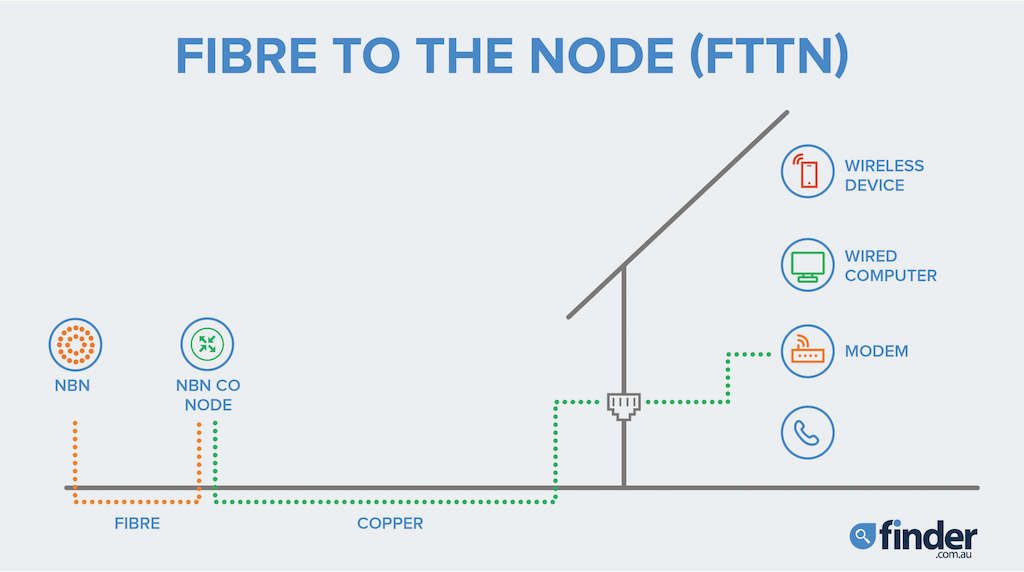 How fast is FTTN NBN?

FTTN NBN is still in its infancy in terms of rollout, and nbn co is experimenting with different approaches to how it delivers FTTN in different circumstances, which will have an effect on the overall speed profile of FTTN NBN services. Because it’s a shared node and the length of copper used will also have an effect on overall speed quality, NBN FTTN plans rarely deliver the top speeds described by their respective NBN speed tiers. Instead, broadband providers display a typical peak-hour speed its users can expect between the hours of 7:00PM and 11:00PM which offers a more realistic representation of performance.

In some circumstances if nbn co determines that a given speed tier is unlikely to be realised at a premises, they may not supply it to your ISP for you to utilise.In trial situations with node cabinets 400m from premises, nbn co has managed 100Mbps downstream connections, but it’s not clear once there are larger quantities of users on a node whether those speeds would be realistically maintainable.

Where is FTTN NBN available?

As part of the switch to the "Multi Technology Mix" (MTM) NBN plan, FTTN connections were set to be provided to around 38 percent of Australian dwellings as part of the broader FTTN/FTTP/HFC Cable rollout. For the specific information about the broadband technologies available at your property, enter your address into our broadband plan engine below and see what plans are available.

How should I compare FTTN NBN plans?

As with any broadband plan, the speeds on offer on FTTN are a key comparison point. Again, it’s worth stressing that these are sold as best case scenario plans, so your experience of an FTTN plan is likely to be a little slower than the stated speed of a given plan. As with any fixed broadband product, you can expect to pay more for a faster connection.

The cost of an FTTN plan relates, as most broadband plans do to a few key criteria. You’ll pay more for a faster connection, and for one with higher download quotas or unlimited usage. If your needs are only modest then a slower, cheaper plan may be a better bet, but it’s worth checking if your provider will allow you to step up to a higher tier plan if you find your existing speed or quota inadequate while still under contract.

As with other broadband plans, it's worth checking for other bundled extras, such as phone calling services – bear in mind that while the copper forms part of the FTTN solution it will inevitably supplant the existing copper phone lines if that's important to you – as well as any quota-free areas if you're on a limited plan.

Will I need a new modem for FTTN NBN?

You’ll almost certainly need a new modem for an FTTN connection if you’re already using an ADSL2+ modem device. Most existing FTTN plans include a bundled modem as part of a contract, however.

If you'd prefer to purchase a modem separately, you'll want to check out our comparison of the 26 best FTTN modem-routers on the market.

Compare FTTN NBN plans in the table below

A significant number of people experience weekly buffering issues, according to new research by Finder.

SPONSORED: Don’t let moving stress drag out for longer than it has to.

Plus $50 off selected devices, 50% off accessories and more.

If this NBN price hike goes through your Internet bill could double over the next decade.