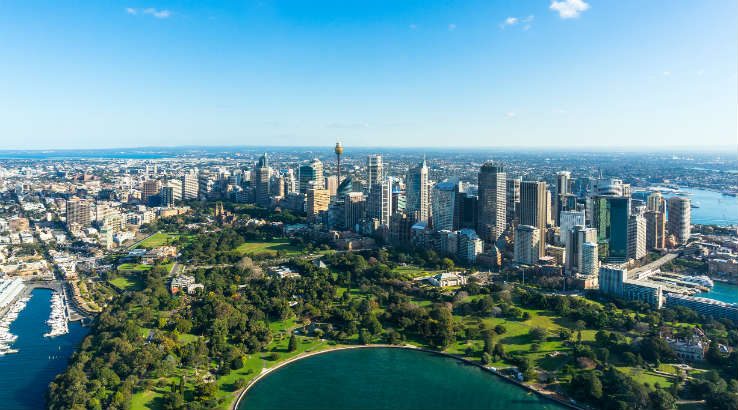 Is September's price drop just a passing dip or the beginning of the end? Time will tell, but here are the factors that matter most.

No Australian city has seen price growth like Sydney. But in September both Domain and CoreLogic reported a drop in Sydney's house prices of 1.9%. Apartment prices also fell. Auction clearance rates have been sluggish too in an unusually slow spring selling season.

The idea of Sydney's property market crashing is daily conversation fodder for the city's residents. A horrifying prospect for investors, a possible boon for frustrated would-be first home buyers.

But no one knows the future. A price collapse is far from certain. What happens next depends on a number of factors.

Sydney's house prices have surged over the last decade. Suburbs that were cheap in 2012 have doubled in value in the last five years. The city's median house price hit $1.15 million in April.

Compounding this price rise is sluggish growth in wages and disposable income. The graph below, taken from Australia's Welfare 2017 report, shows the widening gap between house prices and disposable household income. 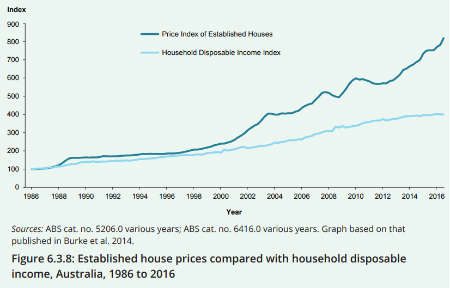 All of this information screams "Unsustainable!" But properties are only worth as much as people are willing to pay. The seemingly impossible gap between wages and property prices hasn't stopped people from forking out millions for Sydney houses.

The number of apartments has soared in recent years

Another data point suggesting at least a sustained price correction, if not a bigger drop, is the pace of apartment construction in the harbour city.

The graph below shows the extraordinary growth in apartment construction nationwide in the last few years, concentrated heavily in the major cities.

The sheer scale of apartment construction, and the fact that many proposed building projects are on hold, is further evidence that a serious price correction is coming. The question is, if apartments drop in value, will freestanding houses end up being worth even more?

Yet all this may not stop Sydney's property prices from growing. The flipside of supply is demand, and Sydney remains an immensely popular city. ABS figures show the city's population grew by 773,600 people in the decade from 2006 to 2016. With strong population growth projected for the future, continuing demand for property may keep prices rising or at least holding steady.

Confused? Don't worry, even the experts are divided on the short-term future of Sydney's property market.

QBE's Australian Housing Outlook 2017 -2020, released on Wednesday, suggests that while Sydney's house prices will continue growing through 2017 and beyond, this will flatten to -0.2% by the year 2020. The report also predicts a 4% decline in Sydney's apartment prices over the same time.

Researchers at SQM, on the other hand, predict solid growth for the city. The firm's Housing Boom and Bust Report 2017 sees the current dip in prices to be merely a minor fall, much like the one seen in Sydney's housing market between September and December in 2015.

But what if interest rates rise?

But interest rates may rise next year. Many economists in finder's monthly RBA survey consider this a real possibility. If this happens then growth may slow even further as mortgage repayments become more expensive.

Whatever happens to Sydney's property prices, there will be winners and losers. A slowdown will hurt investors but provide much-needed relief to people struggling to enter the market. But if the recent drop in prices is just a brief pause before further growth, it's the investors who'll be smiling.