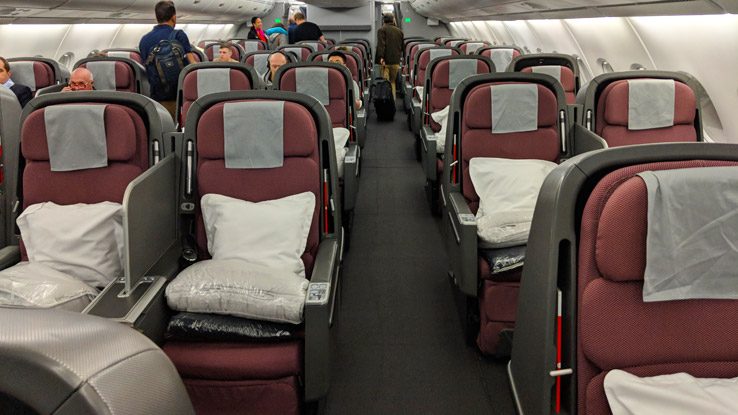 From dining options and customer service to those infamous business class pyjamas.

I recently had the opportunity to test out Qantas' business class flights en route to finder's coverage of CES 2018, flying out of Melbourne on QF93 and then back to Sydney on QF12. In the interests of full disclosure, I travelled to CES 2018 as a guest of Samsung.

Both flights were on Qantas' business class A380s with seats laid out in a 2-2-2 configuration, although Qantas is apparently on track to upgrade its amenities in this area to match other planes in its fleet that support a 1-2-1 layout.

There are numerous choices for your business class travel, but it's rather tempting to "support" Qantas as the default Australian national carrier, but does it hold up its end of the bargain in a real world flight?

There's only one way to find out, and that's to take the trip. Here's my own observations of where Qantas stands out, and where it could use some polish.

Easier access to the plane. One of the definite perks of travelling business class is the separate line for boarding. This isn't just a matter of one-upmanship from anyone travelling in premium economy or economy, but also one of boarding with less pressure to take your seat and secure yourself some space for your carry-on luggage. Qantas' announcements around boarding times for flights in its Melbourne and LA lounges were clear enough and left more than enough time to make a leisurely stroll down to the flight.

Surprisingly practical pyjamas. Sure, there's something slightly daggy about a pair of PJs with a kangaroo proudly emblazoned on the front, but they're also a decent travelling accompaniment inflight and (in a pinch) in your hotel room while travelling. For my part, the top proved handy as an extra layer against the air conditioning, but your own comfort and style tolerances may vary.

Quality meals. The menu that Qantas supplies inflight has a variety of choices, and cabin staff were attentive to specific dietary needs. In my case, that's a nut allergy, and a careful check was made to ensure that my meal choices wouldn't lead me astray. Specific menu items can be ordered at any time during the flight if you're feeling particularly peckish during your journey. Qantas also offers the facility to pre-order your meal, including an exclusive online-only option for the flight if you're the prepared type. Cabin staff were very attentive, checking multiple times if I wanted or needed more to drink or eat, including during the darkened “sleep” periods when I was working amidst the snores of my fellow passengers.

Comfortable bedroll. By default, the seating on the A380 is set out with a standard adjustable seating mat, but you're also supplied a slip-on bedroll that provides a surprisingly large quantity of comfort if you want to sleep. I'm a lousy plane sleeper at the best of times, but the addition of a bedroll did enable me to grab more than a few precious hours of sleep, leaving me considerably more alert when I landed than would otherwise have been the case.

Plenty of storage space. Being in business class you're entitled to quite a lot of checked luggage, bu t if you do prefer to avoid checking luggage, you've got plenty of space of your own inflight. On the way out to the US I had a mid-aisle seat with its own overhead storage, while on the return journey my window seat afforded me the same overhead plus smaller side bins for stowing smaller bags. It makes it particularly easy to arrange whatever you might want to read, watch or work on inflight without having to fuss with an overhead bag in the middle of the flight at all.

2-2-2 layout means some seats are much better than others. I'm a big fan of window seats, but the layout of this particular flight actually makes the interior aisle seats the best option in just about every way. The window seat does give you access to thin side storage bins suitable for a small garment or laptop bag, but you'll be clambering over the passenger in the window-side aisle seat (typically seats B or J) if you need to stretch your legs or take a bathroom break. Conversely if you're in the B or J seats, you'll have someone going over you while you're sleeping if they need that same facility. The inner pair of seats (E/F) each have direct aisle access with no need for bed hopping or being hopped over, so when you’re booking, select those seats even if you do normally prefer to be window-side.

Poor pop-out entertainment screens. You're not likely (or hopefully!) going to be sleeping or just working for the entire flight, but Qantas' pop-out screens leave a little to be desired. Viewing angles aren't great if you're reclining the seat to any particular degree, and the fact that they extend out from the seat arm means that they have to be stowed away during takeoff and landing as well. Thankfully in an age of offline Netflix it's less of an issue than it used to be, but with other planes in the Qantas fleet (and many competing carriers) offering full seatback displays, an old-school extending display is less than ideal.

Busy business lounges. With the strong focus on airport security it's wise to appear at the airport with quite a solid time buffer to get through security, even with the express credentials that your business class flight will provide you on the Australian side of the equation. That almost inevitably means that you'll end up in one of Qantas' business class lounges enjoying a quiet drink (or early coffee), shower or access to the complimentary Wi-Fi. They're all nice perks to have (and far from exclusive to Qantas in a business class sense), but they're also becoming increasingly oversubscribed. Flying on a short hop domestic flight from Sydney to Melbourne, I was early enough that the Qantas Sydney lounge was quite quiet, but the same wasn't true at all in the rather crowded Melbourne lounge, or for that matter the shared lounge in LAX, which only got more crowded as my outgoing flight was (unavoidably) delayed. Airline delays are all part of the game, but a little more space, and especially a few more power points to keep laptops charged wouldn't go amiss. As it was, the available spaces that had access to a power point, especially in LAX were hard to come by, which could be problematic if you're running low on power after a busy day before flying home.

Qantas A380 Business Class: Is it worth it?

The relative value of any business class flight naturally depends on your circumstances, but for Qantas’ particular case, in a competitive business market, it does well, but not superbly. There’s no doubting that the simple amenity of enough space to stretch and sleep, combined with entirely palatable food makes for a more relaxed entry into your travelling country, or an easier time adjusting for the jet lag when you return, but that’s true of any business class flight.

Qantas is due to refresh the layout and style of its A380 fleet including the route I flew, and it will be interesting to see how much of a difference that makes in a competitive sense. If you’re a regular business traveller you almost certainly have favoured airlines and routes, as well as allegiances to the points partnerships that go with it, and that may well determine more about your choice of carrier than anything else.

If you’re pondering the value between premium economy and business, though, Qantas’ current approach could use some refinement, especially around the flip-out screens, which seriously need a refresh or overhaul.

Alex Kidman travelled to and from the US as a guest of Samsung
Pictures: Alex Kidman and Qantas

We test out Cathay's First Class product on its second-longest route.

Fantastic service and a smooth and easy journey is what I received on the inaugural Gold Coast–Seoul flight.

A mediocre hard product, coupled with a much improved dining experience and genial service.

Want to write a review for us?