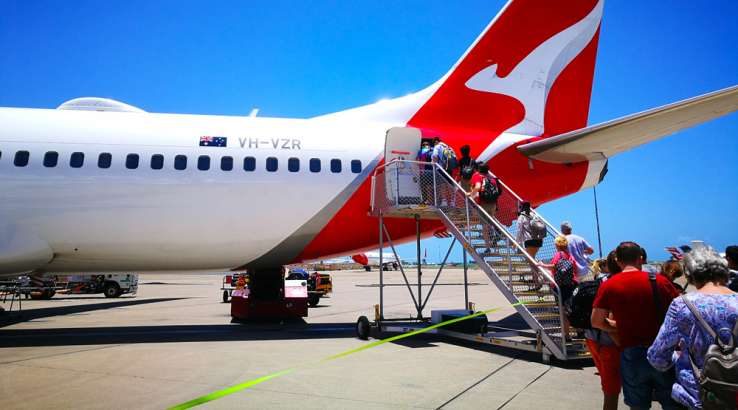 Qantas has outlined plans to revamp its priority boarding service for Business, Gold, Platinum and Platinum One passengers.

The new "Premium Boarding", which will roll out in capital cities from Monday 25 November, aims to quell complaints from regular passengers about how the system works.

Currently, Qantas operates two queues for most domestic flights: priority boarding for the Business/Gold/Platinum crew, and a second queue for everyone else. However, both queues start boarding at the same time.

Domestically, other airlines handle this much better. Bargain-priced Tigerair, for instance, lets customers pay for Queue Jump priority boarding. Queue Jump and exit row passengers are always allowed to board first, before anyone else gets on board.

The issue is much less pronounced on Qantas international flights. Firstly, because many international aircraft have multiple doors and/or levels, priority passengers don't end up in the same queue as everyone else. Secondly, priority boarding usually is called before the masses in Economy get to board.

Why do people care so much about boarding first? Status-based preening aside, the main reason is the rush to get overhead luggage space. Qantas has a generous baggage allowance of two bags weighing up to 14kg in total, and loads of passengers take advantage. That can mean a fight to get your wheeled suitcase overhead if you board late.

So what's changing? The big shift is that the premium/priority queue will be allowed to board first, before everyone else. "General boarding will open up after all queued priority customers have boarded the aircraft," a Qantas spokesperson told Finder. That applies to Business, Gold, Platinum, Platinum One, oneworld Emerald and oneworld Sapphire passengers.

"We will work with staff across the domestic network to ensure these benefits are enforced, and provide a consistent experience with our international boarding process," the spokesperson said. Translation: if you don't have the right priority, you'll be booted out of the queue.

The changes will begin to roll out from next Monday. Initially, Premium Boarding will happen at Adelaide, Brisbane, Canberra, Melbourne, Sydney and Perth. Qantas has said it will roll out across all domestic flights over 2020.

The biggest challenge in making this work will probably be in ensuring that passengers have arrived from the Qantas Club or Business Lounge in time. Typically, announcements aren't made in lounges until the flight is ready to board. If you're in the Melbourne lounge and have to depart from Gate 12 (a frequent occurrence for me), it's likely the economy line will have started boarding before you get there.

No queuing system is perfect, but I'll be interested to see if Qantas can improve the current model. And I'm flying Qantas next week, so I'll have the chance to find out.