What is the average (MJ) cost of gas in Australia?

See if you can save by switching gas providers.

While you may be more aware of how much electricity your house chews through, gas is still a significant part of most households' energy costs. It's used in fewer appliances, but understanding how gas works and how energy companies will charge you for it can go a long way to helping you understand your bills more and even save a bit of money.

While gas tends to be cheaper than power, that doesn't mean you're always getting a good deal. Comparing your expenses to what others are paying is a great way to reality-check your bill.

In this table, we've grouped average quarterly gas bills state by state. Keep in mind that our figures include every type of household, so they're only guidelines.

How much is the average cost of gas in megajoules (MJ)? 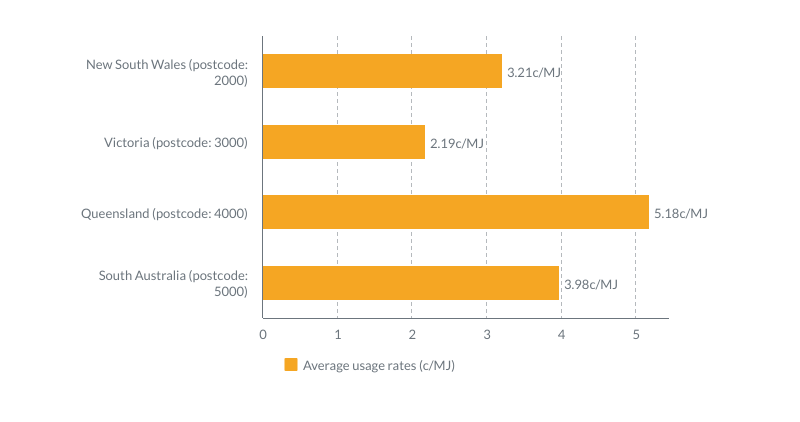 Pinning down a single average price for gas is difficult because it's hugely dependent on where you live.

Customers in Western Australia and South Australia can expect to pay a higher rate for gas than other states, in the realm of 4c/MJ.

But if you're a resident of New South Wales or Victoria, you may only pay 2-3c/MJ, instead.

The table below gives you a good idea of the quarterly price you might expect to pay for gas, sorted by which state you live in. These numbers are estimates only based on average consumption — your actual bill on any of these plans will depend on your own usage patterns.

What is an MJ?

The term "MJ" is an abbreviation for megajoule, a unit of energy that's used to measure gas consumption in the same way the kWh measures electricity consumption. Your gas bill will provide an overview of the total MJs of gas you've consumed in that period.

Appliances which are gas-powered, like heaters, will list their average energy consumption in MJ/h. An appliance with an energy rating of 40MJ/h will consume 40MJ in one hour of regular use. If your gas appliance lists heat output in kWh instead, use a conversion rate of 3.6MJ of gas to 1kWh, so long as it's running at maximum efficiency.

What is the average gas consumption per day? The average gas consumption in a household depends on a few things: how many people are in the household, how many appliances they have that use gas (e.g., cooktops, water heaters, space heaters), and what season it is.

The below figures are for a one-person household and are benchmarks derived from the ACIL Allen Energy benchmarks report 2018. For each state, we've assumed the house does not have a gas heater, which can more than double gas consumption in winter.

Winter: Calculated by dividing the consumption per season by 90 days.

Other seasons: Calculated by averaging the per season consumption for spring, autumn and summer, then dividing by 90 days.

What is the average gas price (MJ) in Australia?

The amount you pay per MJ of gas is by no means a constant across Australia. It varies depending on your distributor and where you live, plus the energy plan you've purchased.

Only a handful of retailers operate in every state, so we've taken the main market offers of three major providers in Australia and averaged their usage rates by state. These retailers include AGL/ActewAGL, Origin and EnergyAustralia.

When looking at gas usage rates compared to electricity usage rates, gas is often charged on something called a "block tariff". This means that the usage rates change the more you use per day, generally decreasing in price. The numbers listed above are only the average usage rates for the first block of gas used in a day, however much that might be.

What is average gas bill in Australia?

According Finder's Consumer Sentiment Tracker, the average gas bill in Australia is around $202 per quarter. Of the three state's where we had the most respondents, here are each of their average bills:

Note: Finder's Consumer Sentiment Tracker takes responses from 16,000 Australians to get an average figure. We will continue to update this data as we get more respondents.

How do you calculate gas usage?

Calculating your own gas usage is usually a matter of reading your energy bill. There are two major parts to a typical gas bill, though the exact layout will depend on who your provider is.

The first section to look at is a graph like the one that's shown here. The left-hand axis of the graph will show the average daily cost you've been paying for gas, while the right-hand axis tells you your average daily consumption. It will also have a comparison of your usage to the same time last year. This can help you identify where you might be using an unnecessary amount of gas and potentially need to cut back. The second part of your bill provides more useful details about your actual consumption. There's a "read type" section that tells you whether an actual reading was taken or if the company estimated. If they estimated when they should be taking readings, you should contact your company, since estimated costs are often much higher than actual consumption.

Gas bills are a little more complicated than electricity since you can't simply take the difference between your end read and start read to find out how many MJs of gas you consumed. You need to multiply this number by the heating value (a measure of how much heat is released from a unit of gas) and the pressure factor (a measure of gas density). Luckily, all this maths is done for you by the company, summarised in the "Usage MJ" column.

This "Usage MJ" number is then multiplied by your usage rate, extra fees and supply charges are added on, and discounts are applied. It's worth checking that this calculation has been done correctly and you're not getting overcharged for your gas. If you are, contact your energy company.

Find out who offers gas plans in Australia