Why are fixed rates sometimes lower than variable rates?

When fixed rates become lower than variable rates, lenders are expecting interest rates to remain low for some time. It all depends on economic forecasts and how loans are funded. 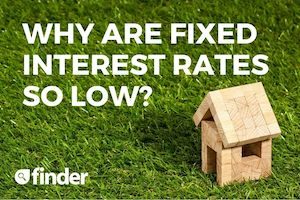 That's the short answer. But the long answer is more complicated.

The role of the RBA

When the Reserve Bank of Australia (RBA) makes a change to the official cash rate, whether it's an increase or decrease, most home loan customers expect mortgage interest rates to change as well.

In recent years, banks and lenders have been reluctant to cut variable rate home loans in line with RBA rate changes, because their margins have been squeezed, and they were focused on boosting profits. However, they have made aggressive cuts to fixed rate home loans.

In fact, an analysis of Finder’s database shows the average standard variable rate has been consistently more expensive than fixed rate loans, from one- to five-year fixed rate periods, since the end of 2019.

So what causes fixed rates to become less expensive than variable rates? And what should you take into consideration when deciding whether to fix your home loan? The answer lies in how these different types of loans are funded.

The sophisticated investors who are pricing bond markets are betting about the state of the economy in the future compared to today: whether it will be better or worse.

On the other hand, variable rates are largely pegged to the RBA's official cash rate, which is the amount the Reserve Bank charges banks for overnight loans. The official cash rate currently sits at 0.10%, the lowest it has been in decades.

A yield curve is a graph that compares the yield, or interest rate, of particular securities that have the same credit quality, but that mature (or end) on different dates. In other words, a yield curve might compare the yield from a 90-day bank bill to a 10-year bond.

In normal circumstances, the 10-year bond would have a higher yield, which means a yield curve would appear like an upward slope, where the yield rises as the date of maturity lengthens.

However, in some circumstances, longer-term debt instruments become lower-yielding than short-term instruments. This happens when the market assumes that yields, or interest rates, are going to fall in the longer term. When this happens, it’s known as an inverted yield curve.

An inverted yield curve is often cited as a reason for fixed rates falling below variable rates.

The double-edged sword of an inverted yield curve

When an inverted yield curve occurs, it can represent a good opportunity to fix your loan. It means that fixed rates have become less expensive than variable rates, because banks are able to raise long-term funding for less money than it costs them for short-term funding.

The downside to this is that an inverted yield curve is often the precursor to a recession, which is exactly what happened in Australia in 2020. The inverted yield curve indicates that the bond market is betting that the economy will deteriorate, causing official cash rates to fall. Right now, the official cash rate is just 0.10%, which leaves very little room for the RBA to make any meaningful further cuts.

Australia has seen several inverted yield curves in the past decade:

Should I fix my home loan?

With all of this context, should you choose to fix your home loan interest rate when fixed rates are so much lower than variable rates?

The answer to this depends on your individual circumstances, but a good place to start is working out what your goals and plans are.

When deciding whether to fix your rate or not, don't try to "beat the market", because it rarely works. Instead, consider what your goals are and whether a fixed rate might suit you.

On the plus side, in the current market, a fixed rate loan:

It's important to also consider the potential risks of a fixed rate loan, and these include:

The best reason to lock in your rate is repayment certainty. When fixed rates become less expensive than variable rates, you can lock in a rate that you know you’ll be comfortable repaying for a set period of time.

And right now, choosing to fix your loan could save you money.

If you fixed your loan at 1.99% for two years, your home loan repayment drops to $1,845 per month, or just $426 per week. This is an instant saving of a couple of thousand dollars per year, and you'll have the peace of mind of knowing your repayments will remain the same, regardless of what happens to the standard variable rate or the broader economy.

Sound like a plan? Compare the latest fixed and variable rate home loans below.

A finance and property journalist of more than 15 years, Sarah is the Senior Editor for Home Loans at Finder. She was previously the Managing Editor of Your Investment Property magazine, Australian Broker magazine, and Your Mortgage, a home loan comparison site. She has written for The Sydney Morning Herald, Canstar, Bupa, Mamamia, Kidspot, Jetstar, Tourism Australia, and she has ghostwritten or edited over 20 books. Sarah also has a Bachelor of Arts in Communication from Griffith University. As a home loans expert, she is a regular media commentator and has a wealth of experience around mortgages, managing money and investing in real estate. Sarah is passionate about showing Australians how to make their money work harder.