Southern Phone was purchased by the energy company AGL at the end of 2019, but it's continuing to do what it does best — selling NBN and mobile plans to customers, especially those in rural and regional areas.

Southern Phone's NBN plans run month to month, and let you bring your own modem or purchase a recommended one as part of your plan. See what's on offer in the table below.

Southern Phone has NBN plans that cover three speed tiers, with no lock-in contract. Here are their plans:

A modem isn't automatically included, although you can add one on for $99. Southern Phone also provides fixed wireless and satellite NBN plans.

These bundles are for customers who want a home phone line as part of their NBN plan. They are only available as 24-month contracts, and have an early termination fee of $10 per month remaining on the contract.

If you're after a home phone and NBN bundle, a modem will be included for free as part of the contract.

Southern Phone may have a strong focus on providing services to regional and rural areas, but it services customers living in metro areas too. Whether or not it ends up being a solid choice for your NBN connection depends on what you're looking for, but its plans do come in at about $5 cheaper than the average for their speed tier.

Here's the main feature available when you sign up to a Southern Phone NBN plan:

Southern Phone's NBN bundles include a home phone line plus some unlimited calls to other numbers in Australia. You'll be locked into a 24-month contract, but you'll get an NBN connection to go with it.

We summarised Southern Phone's NBN plans according to the following features:

The main issue when it comes to Southern Phone is its lower-than-average typical evening speeds — you're likely to see your connection slow way down during busy periods, compared to what you might get from other providers.

How does Southern Phone NBN compare?

To give a clearer picture of how good Southern Phone's plans are compared to others, we've put its NBN50 plan side by side with similar plans from major providers Telstra and Optus.

Southern Phone's plan is cheaper than Telstra's, but that's about the only positive to be drawn from this comparison. The typical evening speed is far below that promised by both Telstra and Optus, and you don't get any of the useful extras delivered by the others for their price.

The only other thing worth noting in Southern Phone's favour is that its modem is optional, meaning you don't have to buy it if you don't need it. Beyond that, there's very little to recommend Southern Phone over Optus or Telstra.

What support channels does Southern Phone have?

While Southern Phone doesn't have any strong reputation for customer service, either good or bad, it does have a number of support avenues available for customers, including:

Customer service
Southern Phone has a local call centre that operates from 8am - 8pm, 7 days a week. You can also get in touch via live chat on the website.

Technical support
The technical support line is the same as customer service, 8am - 8pm, 7 days per week. You can also lodge an issue and request a call back by using the form on their contact page.

Southern Phone has plenty of channels for you to get in touch with it, though you may experience longer wait times than normal thanks to the impact of COVID-19. The live chat is a nice option, but only operates during the same hours as the regular phone support.

Does Southern Phone receive a lot of complaints?

Southern Phone only received 1% of customer complaints lodged between 2018-2019, according to a report from the Telecommunications Industry Ombudsman. This is a drop of 8% from the previous year.

You can see the change in the number of complaints lodged against Southern Phone over the past few years in the graph below. 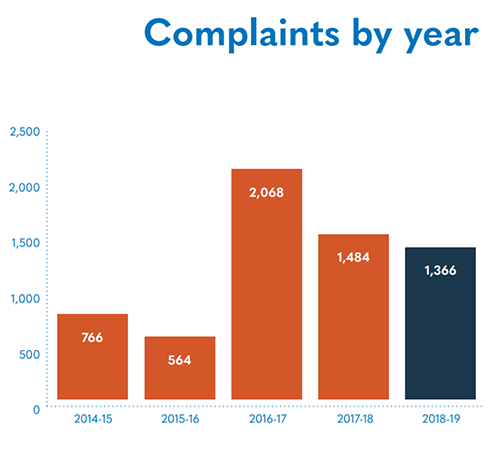 Keep in mind that everyone's experience and circumstances differ when it comes to their NBN provider. The number of complaints made towards a company doesn't necessarily indicate poor service. It's also expected that larger companies will receive more complaints than smaller ones.

If you find you're unhappy with your service from Southern Phone, you can use any of the support channels mentioned above to remedy your problems.

What does Southern Phone NBN set-up include?

When you purchase a Southern Phone NBN plan, you can either bring your own modem, or get a recommended one for $99 with your plan. To set up the modem, you should only need to follow the instructions that come with it to get online.

If you haven't been connected to the NBN before, a technician may need to visit your house to finalise the connection. This won't cost you anything, and you won't need to do anything extra at your end.

Southern Phone operated independently until December 2019, when it was purchased by the AGL Energy Limited Group.

Icons made by Pixel perfect and Freepik from www.flaticon.com

Thousands of Australians still don’t have access to the NBN, but there are fast speed Internet alternatives available.

Follow our four steps to figure out what makes a good Internet speed for you and your household.

Happy with your current NBN plan? Find out what NBN relocation services are available for keeping your NBN provider when you’re moving.

Bringing your own modem across when you sign up to a new NBN plan could save you a couple hundred dollars.

Find the best Internet plans for renters with no contracts and low prices.

Find out where to buy a new NBN battery and easily install it yourself.