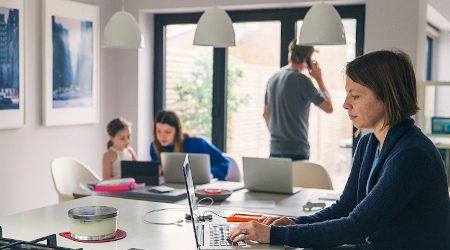 1,000Mbps speeds at home are now a possibility thanks to Aussie Broadband's new NBN plans.

NBN provider Aussie Broadband has today announced the general availability of 1,000Mbps capable NBN plans. Not 100Mbps, as you'd generally find as the top tier of everyone else's consumer-level NBN plans, but the full gigabit.

Sounds tasty, right? Well, it could be, but there are some significant caveats that you should be aware of before you get too excited.

Is this actually legit?

It might look like a joke, but 1,000Mbps is an actual thing. Aussie Broadband is building off the back of freshly available NBN pricing constructs that allow its RSP (Retail Service Provider – basically NBN Co's fancy way of saying "ISP") partners to offer plans with 1,000Mbps download and 50Mbps upload speeds at a lower rate than was previously available.

In the past, if you were a business NBN customer on a Fibre to The Premises (FTTP) connection, then technically NBN ISPs have been able to offer you gigabit plans for quite some time now.

Equally, we've had selected NBN consumer ISPs offer gigabit NBN, but usually in very limited locations for a very limited period of time, primarily because they've used it largely as a promotional tactic. Which is potentially great if you're in selected areas of Tasmania, for example, but not so useful for the wider Australian population.

Because of this, not many people have taken up the offer of gigabit NBN. But that could be about to change.

Is gigabit NBN available for everyone now?

The short answer is, sadly, no.

Because of the way that different NBN technologies have been built, the capability to offer speeds of up to 1,000Mbps is currently limited to connections that use either Fibre To Premises (FTTP) or in selected cases and areas, those on Hybrid Fibre Coaxial (HFC) connections. NBN Co has stated that it expects that approximately 18% of premises that are able to connect to the NBN should be able to access up to gigabit speeds, but that figure does include every single FTTP premises, with the actual figure for HFC access sitting at just 7% of the network.

You can use Finder's NBN Tracker to check which kind of NBN connection your home actually uses.

As with all things NBN, speeds are stated as a maximum, and there are complex provisioning and technical reasons why you're rarely going to hit that full gigabyte.

Even Aussie Broadband is playing it coy, telling ITNews that it expects the plans to hit a maximum of around 80-90% of the theoretical maximum.

It very much depends on your usage patterns. If you're only a light NBN user, then speeds of that type really aren't going to be much use to you, because you probably don't even hit the sides of a 50/20 plan, let alone one that runs 20 times faster! So you can save your money and skip this offer.

But if you download a lot of Linux distributions, or have a very large family that's addicted to watching Netflix in 4K only, then you could start to scratch above the limits of current 100Mbps connections. A 1,000Mbps connection gives you a lot of potential overhead, as long as ISPs actually provision enough bandwidth for everyone who might sign up.

Aussie Broadband's pricing is for a month to month plan with 1,000Mbps download and 50Mbps upload at $149 per month. That's a $50 premium over its current highest-end consumer plan, which offers 100Mbps/40Mbps at $99 a month. You can compare the price and features of the two plans below.

I don't think I need gigabit NBN, do I have other options?

You certainly do. Alongside the 1,000/50 tier ("NBN Home Ultrafast" in NBN-speak), NBN Co is also making plan tiers at 250/25 available to consumers, labelled as "NBN Home Superfast".

Those plans should be more widely available to consumers than the NBN Home Ultrafast, with NBN Co stating that they should be available to around 32% of all consumers, although again that's a mix of FTTP and HFC only. NBN Co says that it should cover 70% of the HFC footprint as it stands, with plans to roll it out to 100% by June 2021.

Again, though, it's up to Internet providers to offer these plans, and your access will be limited by the technology type you're actually able to utilise.

I can't get gigabit NBN – what are some other fast Internet options?

If you're knocked back for gigabit NBN at your address, you've got a few options for broadband that could peak above the current 100Mbps download maximum of most consumer plans. However, this does depend a lot on your location as not all services are available in all areas.

Disclaimer: The Author presents a weekly tech podcast, Vertical Hold: Behind The Tech News, and Aussie Broadband is the primary sponsor. This has had no effect on the writing of this article or the viewpoints presented within.