The luxury car tax (LCT) is applied on cars above a certain value and is paid by businesses that sell or import luxury cars and individuals who import them.

Use our calculator below to figure out the LCT that is included in the overall price of a car in Australia and calculate the LCT you will need to pay.

You need to pay

*Whilst every effort has been made to ensure the accuracy of this calculator, the results should only be used as an indication. They are neither a recommendation nor an eligibility test for any product and should not be construed as financial advice, investment advice or any other sort of advice.

The LCT changes depending on the year and fuel efficiency of the vehicle. It is charged at 33% of the amount that is above the LCT threshold. The table below shows the yearly threshold for both fuel-efficient and other vehicles.

Use a car loan calculator to work out your repayments

How to calculate your luxury car tax

Calculating your LCT is relatively simple. To start, you need to determine the LCT value of the car, which includes what you paid for the car including GST, customs duties and any other costs at the time of the import. You then subtract the LCT threshold. You can check the threshold for the applicable year using the table above. Then use the following formula:

To see an example of how to use this formula, take a look at the example below. 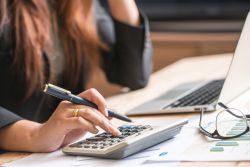 Janice is looking to buy a luxury car to replace her old vehicle. She knows the price but wants to see how much the LCT payable on the vehicle will be.

The car she is looking to purchase is $88,000 including GST and she is planning on buying it in the 2020–21 financial year. It is a fuel-efficient car, which means the applicable LCT threshold is $77,565.

A low rate loan to finance new vehicles or cars up to two years old. Borrow up to $75,000.

Does the luxury car tax only apply to luxury cars?

The LCT is specifically applied to imported vehicles over the LCT threshold. This has made the LCT a point of contention in Australia for some time now from both buyers and manufacturers, because strictly that means that it does not only apply to luxury cars. For example, some entry-level models such as Nissan Patrol wagons or the Toyota LandCruiser 200 series attract the tax. On the flip side, some traditionally luxury brand cars may avoid the tax altogether.

In the years since the tax was introduced, increased buying power has driven up Australia's demand for bigger and better cars. At the same time, cars that may have previously been considered "luxury" have also become more accessible.

What about electric vehicles?

Electric, zero-emission vehicles are charged at the same level of tax as fuel-efficient vehicles ($77,565). This raises some issues from the electric vehicle industry, especially as "fuel-efficient" includes cars that consume up to 7 litres of petrol for every 100km.

While brands like Tesla may be deemed "luxury" in terms of price, many of the features do not meet those of luxury vehicles. Some people argue that taxing zero-emission vehicles like Teslas disincentives people from purchasing these cars and reducing their carbon footprint.

Are there any exemptions to the luxury car tax?

There are a few exemptions to the LCT:

I'm purchasing a vehicle that was imported one and a half years ago. Do I still need to pay LCT?

Yes. LCT is only waived for vehicles imported two or more years ago.

I want to start a business selling luxury cars. What do I need to do in regard to LCT?

Before paying for LCT, you need to be registered for GST and LCT. Your GST registration needs to be processed before registering for LCT.

What is next?
Was this content helpful to you?
Thank you for your feedback!

Matt Corke is Finder’s head of publishing ventures. Prior to this he was head of publishing for Australia, New Zealand and emerging markets. Matt built his first website in 1999 and has been building computers since he was in his early teens. In that time, he has survived the dot-com crash and countless Google algorithm updates.