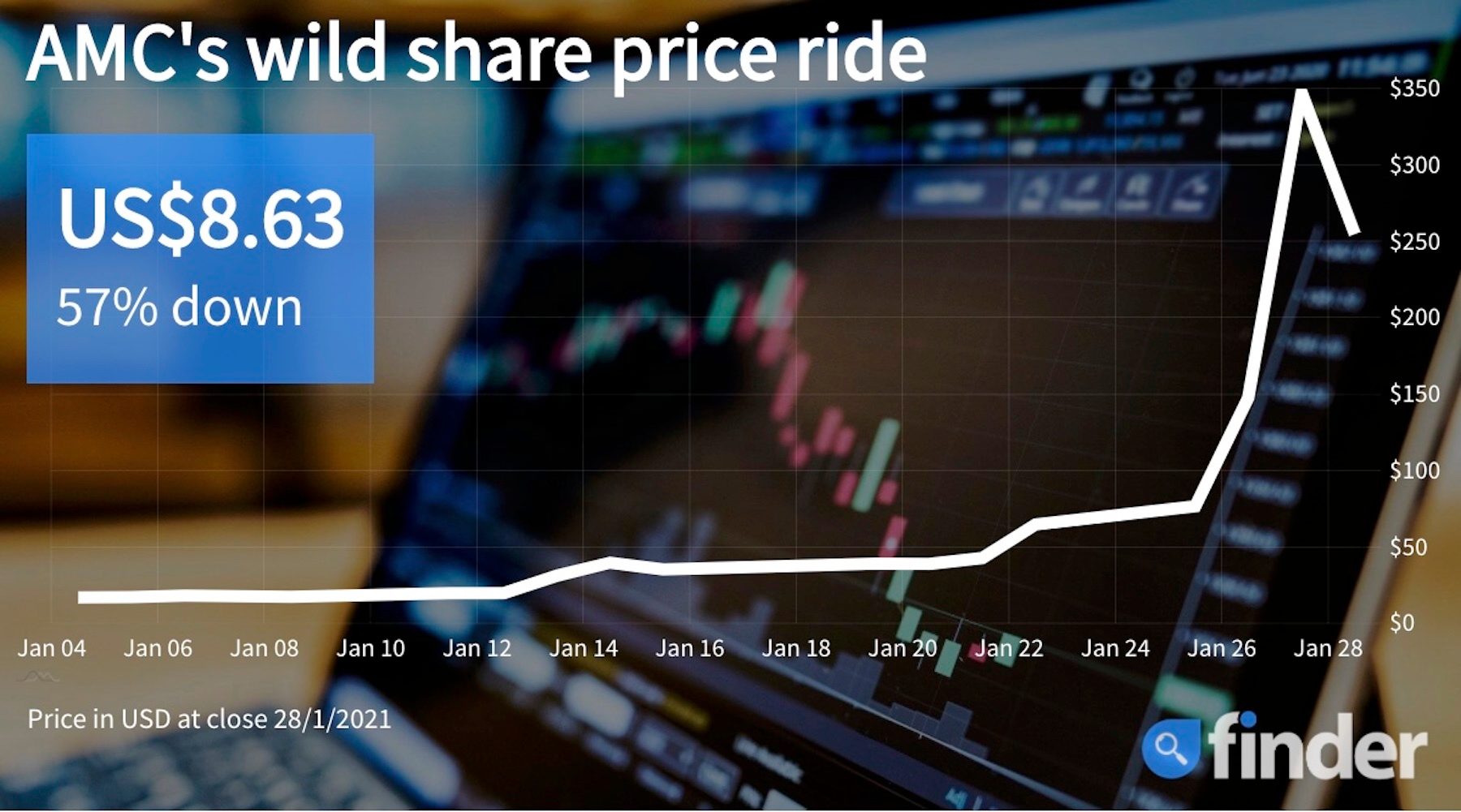 After a spectacular two-day rally, AMC Entertainment shares were looking a little worse for wear on Friday. Stocks closed down more than 56% overnight Thursday, following a rise of more than 300% on Wednesday.

As you're probably aware of by now, AMC's rollercoaster has followed a similar path as a number of other stocks, including GameStop, BlackBerry and Nokia, whose names have become the focus of a group of amateur punters on Reddit's WallStreetBets.

Over the past week, Reddit users had been calling on efforts to boost GameStop's share price after it was named by CNBC as the most shorted stock on Wall Street. The idea being that when a stock price gets inflated, short-sellers lose money and, of course, the buyers profit.

That drive turned into a frenzy after Elon Musk, a well-known critic of short-sellers, tweeted his own support of the group, in Musk's typical fashion.

That success led Reddit users to call out other highly shorted stocks, including US movie theatre firm AMC Entertainment. Bizarrely, many of the stocks named on WallStreetBets appeared simply to be sentimental brands that users had an affiliation with.

By Tuesday, shares had risen by more than 40% as more retail investors took on the pledge against hedge funds in posts urging others to buy and hold firm. Unfortunately, AMC mustn't have received the memo as they sold US$304.8 million in shares the next day.

By Thursday (US), AMC shares were up more than 300%, meaning that if AMC had held on just one more day, they could have potentially sold the same number of shares for US$1.26 billion.

And then it came crashing down

By Friday, despite what amounts to a rallying cry by Reddit users, AMC's share price had collapsed by more than 56%.

The heightened volatility caused a number of issues for retail share trading platforms, where some appeared to simply freeze under the pressure. Others, including Robinhood in the US, eToro and Interactive Brokers, announced they'd paused all trades on AMC, GME and dozens of others from Wednesday night.

With millions of users on Robinhood blocked from buying, the WallStreetBets' list of stocks, including AMC, began to tumble.

Is it a buying opportunity?

AMC's share price over the next few days hinges on how much stamina Reddit users have and whether retail trading platforms provide unhindered access to the stock.

The danger here is that any short-term buying decisions will be purely speculative. Nobody knows how much leeway will be offered to social media forums or whether new restrictions might be introduced. We might see online brokers shut down trades again, or we might not.

Looking at the long-term fundamentals, AMC also has a few weaknesses. With movie release schedules continually pushed back and many cinemas banned in some states due to COVID-19, ticket sales have plummeted over the last 12 months.

Last year, AMC was forced to raise capital through a restructure to stay afloat after ticket sales fell 80%. Bearing in mind that when a company enters bankruptcy, shareholders usually see their stock disappear, its CEO Adam Aron said in a press release in August last year:

“The magnitude of the impact of the global pandemic on the theatrical exhibition industry was again evident in our third quarter results, as theatre operations in the U.S. were suspended for nearly two-thirds of the quarter. And yet, despite unrelenting obstacles, the AMC team continued to make significant progress in pursuit of our three key priorities: to strengthen our liquidity position; to dramatically reduce operating and capital expenditures, and to continue to safely and successfully restore our operations."

Even if all social activities return to normal on the back of a vaccine, there's still the rise of online streaming services like Netflix to contend with in the long-run. That being said, AMC's share price is still far from where it was pre-pandemic. Just two years ago, AMC was hitting upwards of $30 and then $16 in 2019.

As for the next few days, it seems anything is possible. One thing is certain, it's a risky market.