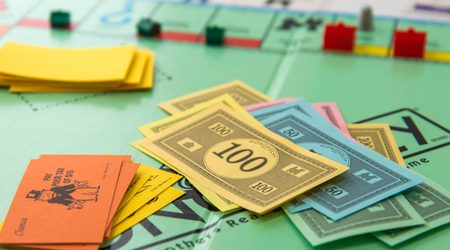 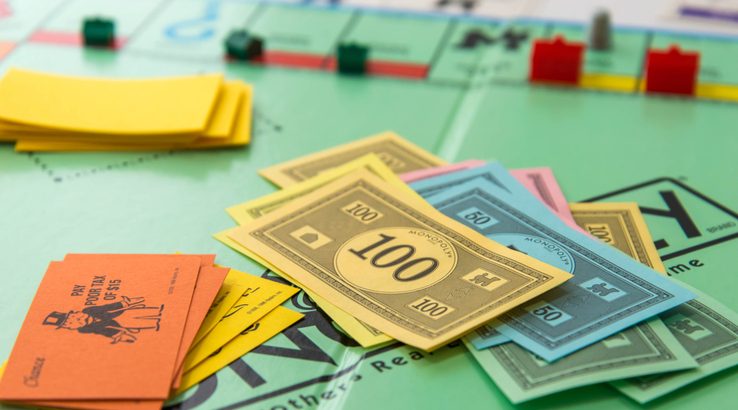 Analyst says about 20% of cryptocurrency trade volume is fake and OKex is faking over 90% of its volume.

About $3 billion of supposed cryptocurrency volume, roughly 20% of the total market, simply doesn't exist, analysis suggests. Instead, it's being faked through fairly obvious wash trading, where someone just sells to themselves.

The worst offenders tend to be Chinese exchanges, and the overall worst appears to be OKex, supposedly the world's number one exchange by volume, which might be faking over 90% of its volume. This was the conclusion reached by trader Silvain Ribes, from what was meant to be an unrelated study of price slippage.

"When I set out to datamine for this piece, I had no idea I would end up talking about fake volume," Ribes wrote. He initially set out to research liquidity and how much prices would slip when selling $50,000 worth of different cryptocurrencies on different exchanges, but quickly realised that some of the results made no sense.

The smoking gun was his discovery that in some cases prices would have plummeted enormously, even though the supposed selling was only a drop in the ocean.

Ribes put together the below chart which shows measured slippage, and the volume it indicates, when selling $50,000 worth of cryptocurrency at different exchanges. The orange, dark blue and light blue dots are GDAX, Bitfinex and Kraken respectively, while the red dots are OKex.

The multiple dots of each colour indicate different currencies, such as bitcoin, Litecoin, Ethereum, etc.

It shows, for example, slippage of 10%, or even 50% in one case, when selling $50,000 worth of coins that supposedly have a 24-hour trade volume in the tens of millions of dollars on OKex. It also shows at a glance that OKex is claiming extraordinarily high trade volumes on a range of coins, even compared to very large exchanges like Bitfinex.

It's not possible to overstate how incredible these results are. It's not a small difference, or within any remotely conceivable margin of error. These are extraordinarily hyper-blatant numbers. 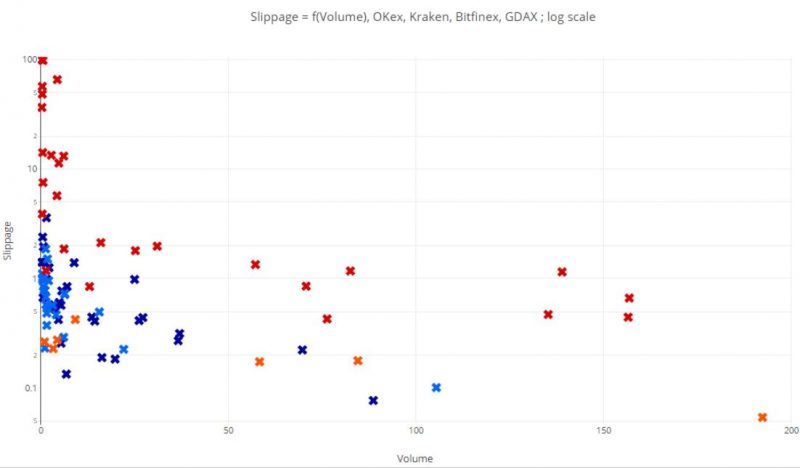 With his interest understandably piqued, Ribes decided to log into OKex and take a look at the 24-hour trade volume himself, where he found something extremely unusual.

"Indeed, they fake their volume in a laughingly obvious and artificial way," he wrote. Real exchanges show "spikes, dips, snowball effect on higher volatility. Not a chart out of a high school oscilloscope."

He also notes that they went to the trouble of mimicking a day and night cycle in China, suggesting that they put some thought into making it look real but still couldn't come up with anything better than a smooth, consistent curve.

Where the 93% estimate came from

Barring a really fantastic explanation from the OKex PR team, it's clear beyond a shadow of a doubt that the vast majority of its trade volume is faked. But how bad is it?

Ribes decided to find out by analysing a range of fairly reputable exchanges for real slippage measures, which is essentially what he was trying to do before getting sidetracked by the fake numbers at OKex.

He chose Bitfinex, GDAX, Poloniex, Bitstamp, Gemini and Kraken, and then used $20,000 market sells to get a sense of expected slippage, ruling out any above 0.7% to help eliminate outliers. These exchanges all gave reassuringly similar results. Now Ribes had a clear baseline for how much actual slippage to expect at certain volumes and had a decent way of estimating actual volume by measuring slippage alone.

Doing so across a range of coins showed that, on average, about 93% of OKex trade volume is apparently nonexistent.

OKex wasn't the only exchange to go under the magnifying glass. The same analysis found many others to be full of hot air where they should have been full of money. Huobi was the second worst offender of those measured, with up to 88% of its volume potentially being fake.

"A quick glance at their [Huobi's] trading history easily confirms that although the volume appears much, much more organic than OKex's, there still exists a strong background of constant low-key wash trading," Ribes said.

He also noted the recent arrival of a "Chinese rip-offs armada".

"CoinMarketCap has quite recently listed a host of Chinese trading exchanges that all boast rather high trading volumes but somehow, no one has ever heard about. Most of them obviously share the same User Interface and trading engine," Ribes wrote.

"Among them, but definitely not limited to, are names such as: Lbank, Exx, RightBTC, CoinEgg, Zb, BitZ, Bibox, CoinEx, BTC-Alpha…

Those platforms are so blatantly faking their volumes that they do not even deserve running numbers: just go and have a look for yourself. It is an absolute disgrace that CoinMarketCap and LiveCoinWatch should list these scamholes alongside sometimes struggling legit exchanges."

Next up Ribes plans to examine individual specific-looking coins which might produce some very interesting results and some very entertaining discussions among the coins' supporters.

In a future analysis I'll look at individual currencies. Got a hunch a few have their hands deep in the cookie jar. pic.twitter.com/lNN4or7fkU