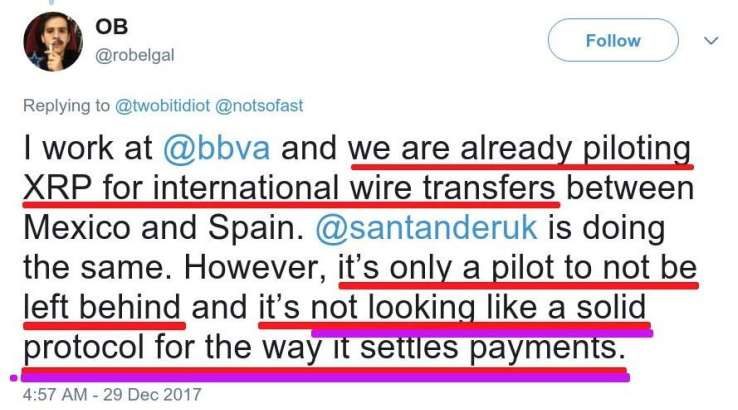 It appears that the individual claiming to be an employee of BBVA is in fact no longer an employee having left BBVA back in June 2017. His tweet with a photo of a letter he claims was from Ripple has also been removed. The claims he has made should be taken with a grain of salt and may not be factually accurate.

An individual claimed to be an employee of a major Spanish bank and gave a poor assessment of Ripple.

UPDATE: Just in, BBVA has responded to the claims.

Ripple is growing. In the huge sea of cryptocurrencies to emerge in bitcoin’s wake, Ripple is currently making waves. The altcoin has just hit an all-time high, having climbed from US$0.22 to a peak of US$2.50 in just a month. We’ve gone into some detail about this growth and whether it’s too late to buy Ripple, but it’s not all been happy news.

Today, an individual going by the Twitter handle OB attracted attention amongst the cryptocurrency community. It's the second high-profile Twitter-based controversy this week, following the claims John McAfee was blackmailing the creators of Verge. OB claimed to be a product manager for eCommerce FX at BBVA (a major Spanish bank) and said he had been involved in an internal pilot that looked to ditch traditional wire transfers between countries in favour of using Ripple.

OB said the project began 15 months ago between branches of the BBVA in Spain and Mexico. He also indicated that he was aware of a similar test occurring between Spain and the UK at another bank, Santander. However, OB indicated that the tests of using Ripple as a means of international money exchanges and transfers did not appear like they were going to meet the bank's standards.

"It’s not looking like a solid protocol for the way it settles payments," he wrote in one tweet. In a separate tweet he also wrote: "It’s an internal pilot not release [sic] to clients yet and looking like it’s gonna die."

(Update: At the time of initially writing this post, OB's Twitter account was disabled from public view. It has since returned to public view, with the tweets you can see on this page not referenced.)

It's important to note that these tweets, which went live December 29, 2017, counter a press release released by BBVA back in April 2017. It's also worth noting that OB's tweet does not suggest Ripple failed to work as a transfer of funds medium, but only that it didn't work to the standard BBVA was after. Also, while his tweet did reference another bank, it doesn't make comment on whether Santander's Ripple pilot worked or didn't work, only that it was being tested there as well. 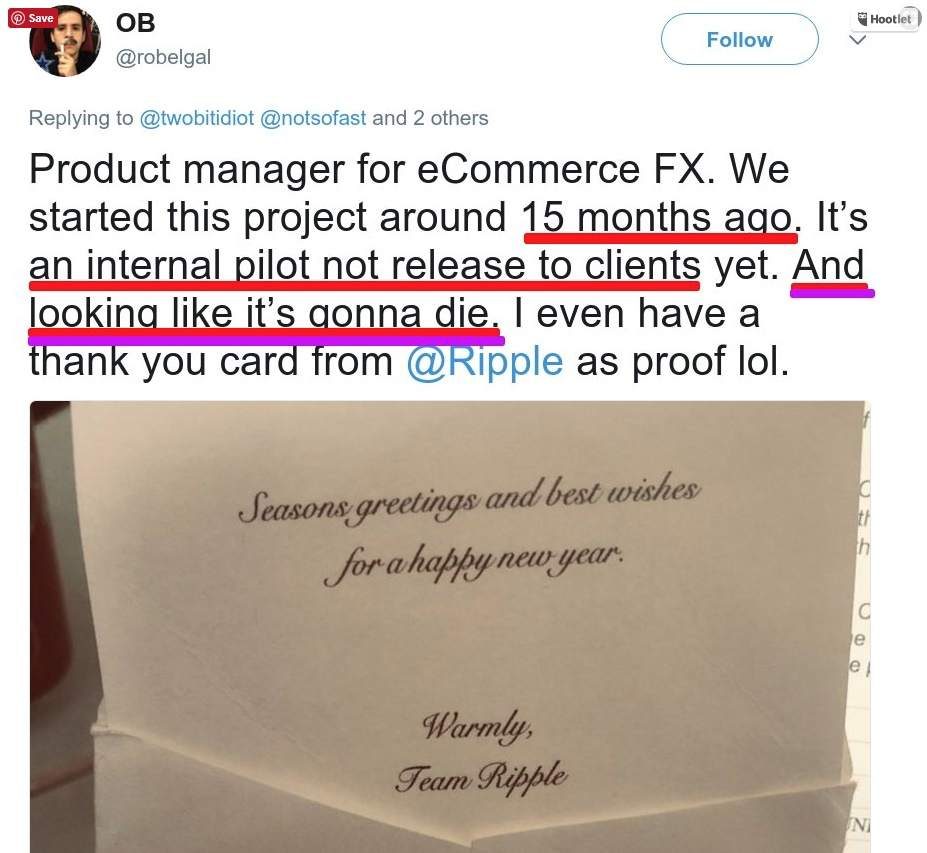 Why is the OB leak a potential problem for Ripple?

Ripple looks to separate itself from other cryptocurrencies by being, in part, centralised and run by a governing body. This in turn allows Ripple (the company who created a coin of the same name) to set a more targeted goal for itself than other altcoins, and that goal is to become the de facto currency for money transfers between countries.

Current forms of payment by wire transfers or SWIFT are plagued by high fees and takes some time. Money is exchanged from the country of origin, into the current de factor currency – the US dollar – and then from that into the currency for the country of destination. Ripple can achieve the same feat in a matter of seconds, and without the exorbitant fees that occur from so many banks being in the traditional currency journey.

Ripple’s goal of replacing the US dollar in the global currency exchange market is one of its big selling points and part of the reason why it has attracted the interest of cryptocurrency traders. However, if OB’s claims are true, or even half true, or even not true at all but believed to be true by reactionary traders, it could cause Ripple’s price to drop. This is FUD (Fear, Uncertainty and Doubt).

However, at the time of writing, OB's claims can only be categorised as unsubstantiated hearsay. Will OB be able to prove his comments? We’ll let you know if it develops into a bigger story over the coming days. We've also reached out to BBVA to get the bank's side of this story.