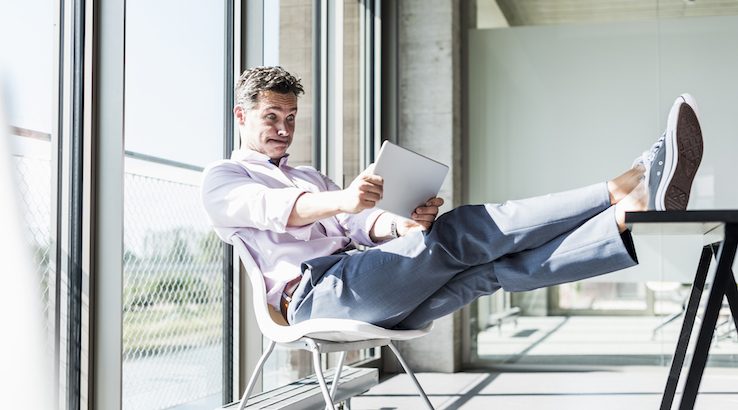 Get zero brokerage fees and start tracking some of Australia's best performing portfolios with SELF.

As the saying goes, if you can't beat them, join them, which is exactly what Australia's newest exchange traded fund (ETF) is trying to do.

In what is apparently a market first, investing platform SelfWealth is launching a peer-to-peer ETF that copies the decisions made by Australia's top self managed super fund (SMSF) investors – so that you're ultimately investing in the same stocks they are.

As an extra incentive, if you buy units in the SMSF Leaders Fund (ASX:SELF) through SelfWealth's share trading platform, you can enjoy zero brokerage fees.

While an official date has not been given, a SelfWealth spokesperson said the listing is scheduled for November.

"There’s no other ETF available on the ASX that has adopted the same [or] similar methodology, so it’s a first for the market," ASX business development manager Rory Cunningham told Finder. "It certainly is an interesting product."

In fact, it's the first listed fund in the world to use this kind of methodology, according to SelfWealth, and it has the backing of ETF pioneer Graham Tuckwell, whose firm ETFS Capital is seed funding $100 million into the fund.

An ETF is typically a fund made up of multiple companies and listed on the stock exchange. Instead of buying shares in an individual company, you're investing in dozens, often hundreds, of companies at once.

The fund – which is a collaboration between SelfWealth and ETF Securities, the Australian arm of US parent company ETFS Capital – collects data from the country's highest performing self managed super fund (SMSF) portfolios and automatically selects the same company stocks that they do.

Since the inception of SelfWealth's index in 2012, it has outperformed the ASX200 by around four percentage points to September 2019, although not ever year is successful. As with many ETFs, this is a fund that has performed better over a longer time frame.

Always remember that past performance is no indicator of future performance – even so, it's a useful guide.

How does the SMSF ETF work?

The ETF uses data drawn from SMSF administration software firm BGL to track around 90,000 Australian self-managed super funds. It then uses the data from the best performing 10% of portfolios and automatically mirrors their investments once every quarter.

The ETF only invests in stocks listed in Australia and it will always hold a minimum of 25 stocks and a maximum of 75. So, if the top 10% of portfolios have all invested in the same 20 companies, it will branch out further to reach the minimum requirement.

There's never any human interference apart from an annual reassessment of the strategy by management. This means that the fund can technically be called a passive index fund, even though it appears to behave like an active fund.

"There's no subjectivity to it, no-one can override the outcome, but it is unusual," head of ETF Securities Australia Kris Walesby told Finder. "You are using objective rules to comb through other people's selection of stocks."

Speaking at a recent ETF launch event, Walesby explained that because most SMSF holders manage their portfolios on the advice of financial advisers or brokers, the index is primarily tracking the decisions made by expert investors rather than the fund holders.

The fund is due to be listed on the ASX in November, with a listing date set to be announced in the next fortnight.

If all goes well, SelfWealth CEO Andrew Ward said it expects to release funds with similar investment models in the United States.

Although SelfWealth currently only allows trading of Australian listed stocks, there are plans to feature international trading by early next year.

Shares in Rio Tinto have climbed more than 15% in the last month.

Reporting season is a 2-week or so period where investors can see the results for a large number of publicly traded companies.

Shares in BNPL provider Zip Co are down nearly 48% over the last 6 months.