Why you can’t get into airline lounges after flights 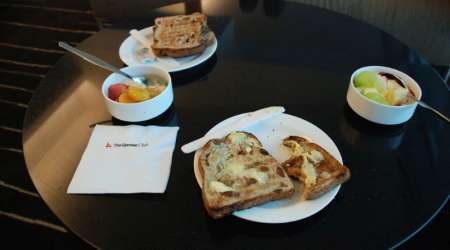 Rules blocking access to the Qantas Club and Velocity Lounge might be annoying, but they're not new.

Airline lounges offer free food, free booze, showers, power outlets and (at least in theory) a calmer environment than the airport itself. Many of those options would be welcome after a flight as well as before it, but can you actually do this in Australia?

A recent news article suggests that some passengers are surprised to discover that, for the most part, you can't. Even when you've paid for a Qantas Club or Velocity Lounge membership, you can't visit unless you're actually on an outbound flight that day.

The only exceptions are for higher-status flyers. Qantas allows Platinum and Platinum One members to use the lounge after a trip. Their higher status also means they can use Business or First lounges in the cities where those operate. Similarly, Virgin allows Gold and Platinum members to make a post-trip visit, though Gold customers might not be allowed in if the lounge is crowded. Pro tip: on Friday and Sunday evenings, the lounge is always crowded.

The degree to which these rules are enforced has varied markedly over the years in my experience (I've been lurking in Qantas lounges for way too many years). Back when the only way to check in was at the airport itself, you'd invariably have to show your boarding pass to get into the Qantas lounge.

Now you can check in for domestic flights purely by tapping your membership card on a reader, meaning you have no boarding pass to show. For many years, you could simply flash your card to gain admission to the lounge, meaning no-one was checking whether you were pre-flight, post-flight or not actually getting on a plane at all. (The one exception was Adelaide, where for some reason, they always checked.)

But Qantas has definitely become tougher in recent years. If you show up and just show your card, it will be scanned by the staff, and if you're not flying, the chances are they won't let you in. That's written in the rules, so you haven't really got grounds to complain. Another pro tip: you'll improve your chances of having the rules bent with charm rather than bluster.

In the end, most people want to get out of the airport when they land, rather than hanging around. But if you do want to hang around, it pays to know the rules.