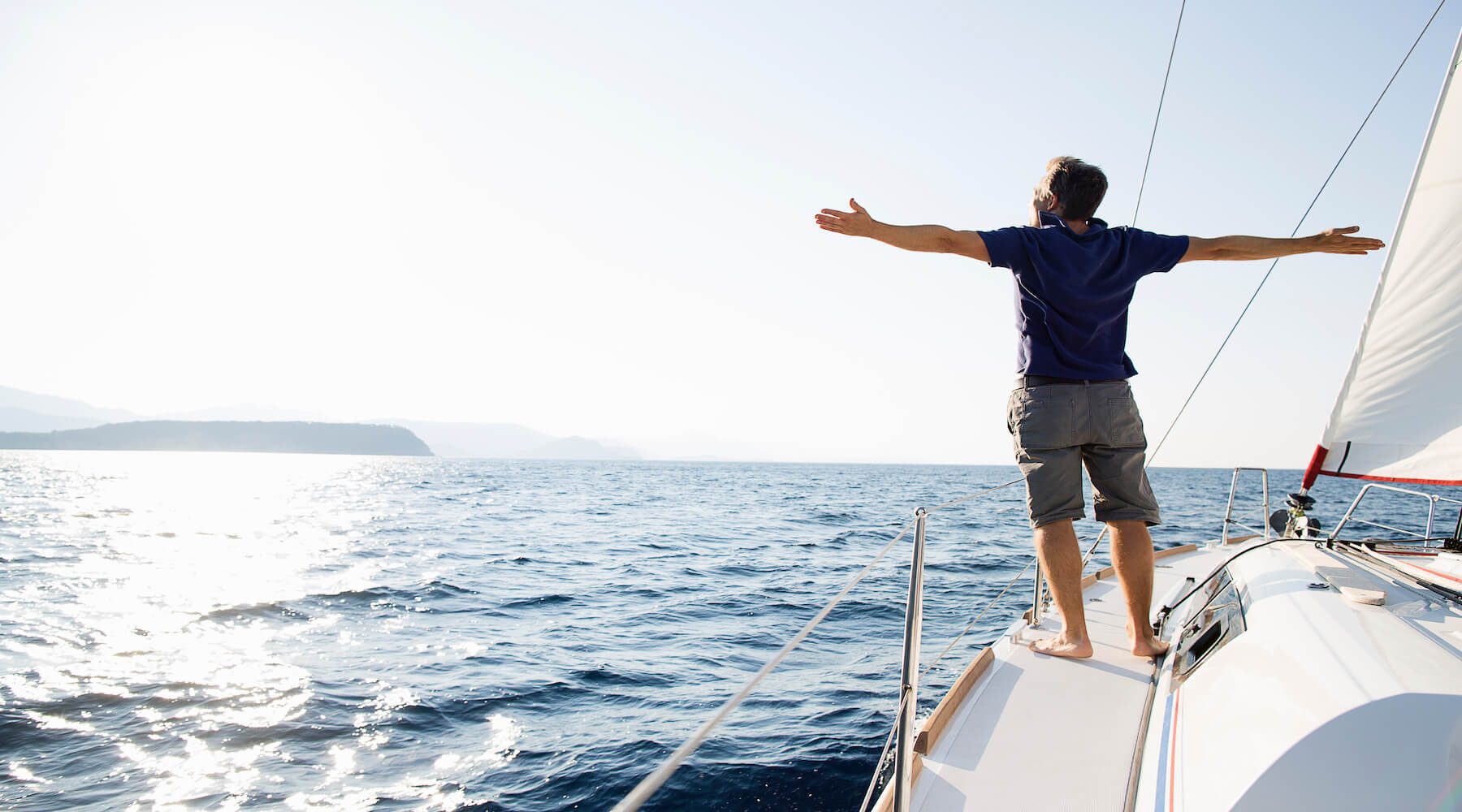 While 2021 may see Bitcoin scale up to new heights, analysts believe that a "cooling off period" will be witnessed somewhere around the $35,000 region.

Over the course of the last 24 hours, Ethereum, the second-largest cryptocurrency by total market capitalisation, also broke the $1,000 barrier, leading some to suggest that many altcoins may also be on the verge of breaking out soon. 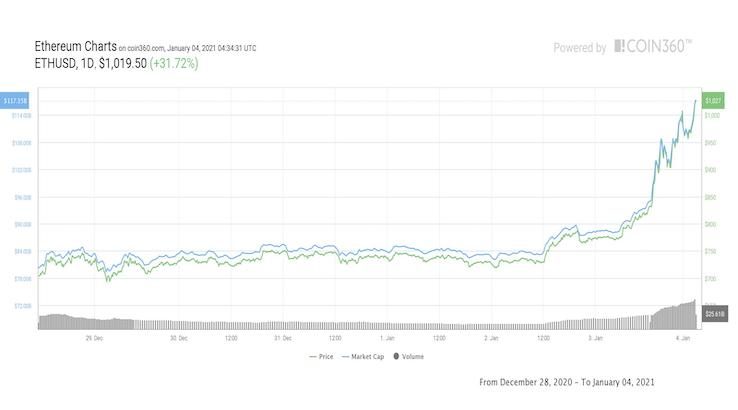 Ethereum's increase of 56% over the past week. Source: Coin360

However, as good as all of this may sound, the aforementioned run seems to beg the question "Is such financial momentum actually sustainable in the long run?" To gain a better overview of the situation, Finder reached out to Sam Tabar, co-founder of Fluidity (creators of AirSwap) and head of Capital Strategy (APAC) for Merrill Lynch. In his view, while this bullish wave may appear controversial to many traditionalists, it makes absolute sense structurally even though it may not be cyclical in nature. He added:

"With respect to Bitcoin, the run-up structurally makes sense for three reasons: supply, storage and institutional adoption. Supply because there will only ever be no more than 21 million Bitcoin. Demand could increase 100x and supply wouldn't budge. This acts as an inflation hedge: with governments in full stimulus mode, Bitcoin is a useful safeguard against inflation with its supply capped, and its scarcity gives it an innate value."

A similar point of view is shared by Alan Silbert, executive MD at INX and former senior vice president at General Electric Capital and Capital One, who very much believes that this ongoing momentum is feasible since institutions are driving a lot of money into BTC as a result of its limited supply. However, he believes that the industry is currently in uncharted territory, which could result in increased volatility sometime soon.

Another interesting point worth noting here is that at current prices, only around $30 million of BTC are getting mined per day. As a result, demand for the currency is far outstripping its overall market supply. In this regard, Silbert added: "Money printing, interest rates and distrust of government have set up a perfect environment for Bitcoin in general. This rally could get us well into high five figures this year."

When will things cool off a bit?

While the crypto market appears to be stronger than ever before, especially with many of the speculative elements that were present in 2018 now rooted out, analysts from the crypto as well as the traditional finance sector seem to believe that by the end of 2021, the digital-asset industry could rise to unprecedented heights. For example, Bloomberg researchers recently released a report claiming that BTC was well on its way to reaching $50,000 soon.

Elucidating his thoughts on the subject, Sidharth Sogani, CEO of CREBACO Global Inc., a blockchain analytics firm, told Finder that the market has matured much faster than he could have ever imagined, adding that a target of $50K for BTC seems extremely realistic at this point. He further opined: "It will definitely reach 50k somewhere in 2021. But maybe a correction at around 35k will be witnessed or at least things may start to cool off around that point."

As to why he believes there is no stopping this current run, Sogani highlighted: "The run is totally sustainable, especially with the US dollar expected to lose 20% of its value in 2021. I believe, along with BTC, gold and silver will also show significant gains in the coming months."

And while Sogani's aforementioned statements suggest that many precious metals will rise along with the crypto sector, Tabar believes that Bitcoin stands to replace gold completely as a long term store-of-value (SOV) because of the various storage benefits it affords to the masses in general. As such, one can hold Bitcoin for years at a low cost, waiting for demand to arrive. This lays in stark contrast with many sought-after commodities like oil, natural gas, gold, etc.

Also, institutions are understanding this nascent asset class better. In institutional finance, familiarity breeds comfort and Tabar believes that traditional players are no longer afraid of getting involved in Bitcoin as they used to be. However, he proceeded to add a note of caution:

"Although structurally in the long term, I see this going much higher than where it is today, cyclically it will have major corrections and consolidations. It went up too fast too soon and it is likely some correction will happen after the holiday festive season is over."

SPONSORED: Warren Buffet is a supporter, but is it too late to get on board?

Corrections may come but growth should continue

On 3 Jan, Bitcoin witnessed a swift drop of around 10%, driving the currency's price from $33k to $30k within a period of 7 hours. However, this slump was followed by a swift recovery, as can be seen from the graph below. 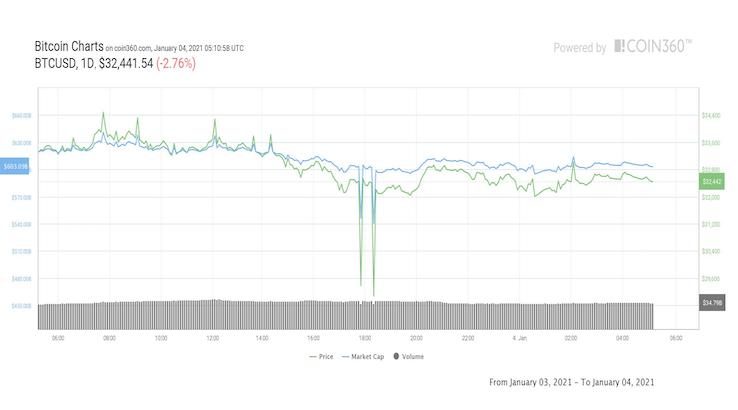 What this seems to suggest is that while some people are cashing out in hopes of making a quick buck, the long-term outlook for the industry may be starting to become one of increasing stability. In this regard, Dvir Oren, host of the YouTube channel Crypto FOMO, told Finder: "Corrections will come but the big money is made in one direction, and that's being long. Bitcoin is just getting started and it's going to $150k in 2021. If Uncle Sam decides to keep printing more money, then I can see a 6-figure valuation bitcoin before 2022."

Disclosure: The author may hold the cryptocurrencies discussed in this article at the time of writing.