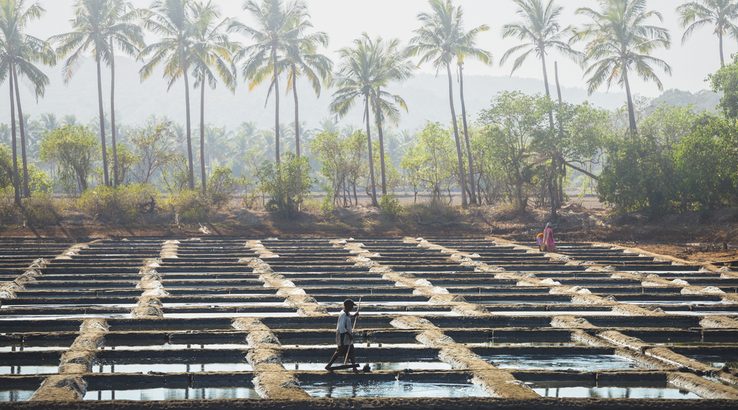 "IndiaChain" goes beyond agriculture and beyond the smart farms that Australian agri-tech is focused on.

The Indian government is reportedly laying the groundwork for an agricultural blockchain system as part of a larger effort to create the wider national blockchain system, dubbed IndiaChain, as reported in FactorDaily. It might be a smart, well-reasoned and very effective solution to several issues which have been largely unsolvable until now.

India's comprehensive national agricultural blockchain plans might solve some of these immediate problems, and also become a system that everyone else can learn from.

In particular, it's a unique approach from a country where large scale industrial farming is relatively uncommon. While other countries are driving towards autonomous smart farms, India's laying plans for a much wider national blockchain system that even manages to integrate the land itself.

The agricultural part of India's blockchain system encompasses several elements and connects to other areas such as insurance and legal around the peripheries.

Even before the prospect of a national blockchain India started working on the now-prescient soil health card initiative. This scheme digitises information on land use and soil quality around the country, including:

Standardised soil sample collection and analysis is carried out on a regular basis by universities and other contracted third parties, at nominal cost to the farmers. Based on the information fed into the system, farmers can get recommendations on how to manage the land for sustainability and optimal yields.

The plan is to put this information on the blockchain so it can be tied to the crops produced and other data, further automated and more securely managed. It can also be more easily and effectively analyzed and tied to other blockchain data types. For example, by crossing climate data with soil quality information to get better long term forecasts.

A reliable blockchain system for land cards can also help tie more efficiently into India's wider agricultural system. For example by making sure farmer subsidies are allocated as effectively as possible.

The land can be trustlessly connected to the crops via the farmer. One of the most specific benefits of this is to help stomp out problems with "counterfeit" produce. Completely organic produce, grown in soil that's never used fertiliser, can attract a considerable premium explained a NITI Aayog (National Institution for Transforming India) official.

In recent years India has struggled with high fertiliser costs and shortages, largely driven by increasing phosphorus prices. The soil health cards are also a response to this issue, designed to help farmers find the right additives for their land. Meanwhile, crop tracking can promote the financial viability of produce grown without additives, freeing up more of the supply and helping to manage fertiliser prices.

In addition to this, it can bring the blockchain benefits of improved logistics management, and bring all around efficiency and tracking improvements to India's agricultural sector.

India isn't the only country turning to blockchain land rights solutions. Ghana, Sweden and many others are also looking at blockchain technology as a way of permanently solving a seemingly intractable problem.

But India's need might be greater than most. Small scale agriculture is one of its economic vertebrae, but disputed land might not be used to its full potential. And right now India has more than four million pending land dispute cases.

Common problems include a mismatch between the on-paper and actual dimensions of a property and multiple claims on the same piece of land. The Indian government is aiming to solve this with the blockchain, said an official to FactorDaily.

"Once the document is done (on blockchain), nothing can change in the document. When you buy land you will get all the documents of all the land since a long time back," said the official.

But this step might still be a relatively long way off. Unlike the digital soil health cards, land records are yet to be digitised around much of India.

"Even though land titles on the blockchain was another implementation being talked about, the process will take much longer as a lot of the states are yet to digitise their land records."

The next phase includes loading more information on the blockchain and integrating it with a wider range of increasingly blockchain based systems. Rainfall data is one of the specific goals.

"It is to know how much rain happened where," said the NITI Aayog official. "Then, insurance products can be built… everything can be put on the blockchain."

Integration of the digital soil health cards and other agricultural applications is one of the first planned uses of IndiaChain, along with tracking of student registration at universities and electricity distribution around the country. But eventually it's intended to be widely integrated with India's Aadhaar system.

Aadhaar is India's national ID card system, and the world's largest biometric ID system with 1.2 billion enrolled members. About 99% of India's population is registered in the system. It takes the form of a unique 12 digit number, linked to biometric information.

It's considered proof of residency in India and has become increasingly linked to a range of services. The eventual plan is to keep the information on the IndiaChain blockchain, where it can be more easily integrated with other systems, kept up to date and used for applications like voter fraud prevention and crime fighting.

Some of these elements, such as the block chaining of soil health cards, are expected to arrive sooner than others like the full integration of Aadhaar on IndiaChain.

But soon there might be more proof of concept for India to work with. The city of Taipei is set to trial tangle-based citizen ID cards through the IOTA system. Successful trials there might show a feasible blockchain-esque citizen ID system.

Agriculture, in particular, might be seen as a strange pairing with blockchain technology, but there might be a lot of potential. In Australia, land price pressure has increasingly led farmers to shift investments towards technology and the "agri-tech" business is growing quickly. On the machinery-driven farms down under this is likely to take the form of IoT-driven "smart farms". Bosch Australia is already working on a smart farm prototype at its Australian agri-tech hub.

While heavy duty farm automation isn't as prevalent in India, it looks like the government is still finding plenty of applications for blockchain technology in the field.