Goldman Sachs fielded a client call, fumbled it and pitched bonds over gold or Bitcoin.

Goldman Sachs has historically had a bipolar relationship with Bitcoin. This week it appears to be in a bad mood towards it. On Wednesday, Goldman Sachs held an investor call to address Bitcoin and gold, presumably in response to strong demand from its client base.

Goldman's historically temperamental attitudes to crypto meant no one was sure what to expect this time, but with everything going on in the world today and recent news of hedge funds getting into Bitcoin, the general expectation was probably on the optimistic side.

Instead, Goldman Sachs stuck the knife into Bitcoin and gave it a good twist.

"We believe a security whose appreciation is primarily dependent on whether someone else is willing to pay a higher price for it is not a suitable investment for our clients," it sniffed. Gold was also slapped away, in favour of good, honest cash-flow-yielding assets like stocks and bonds. 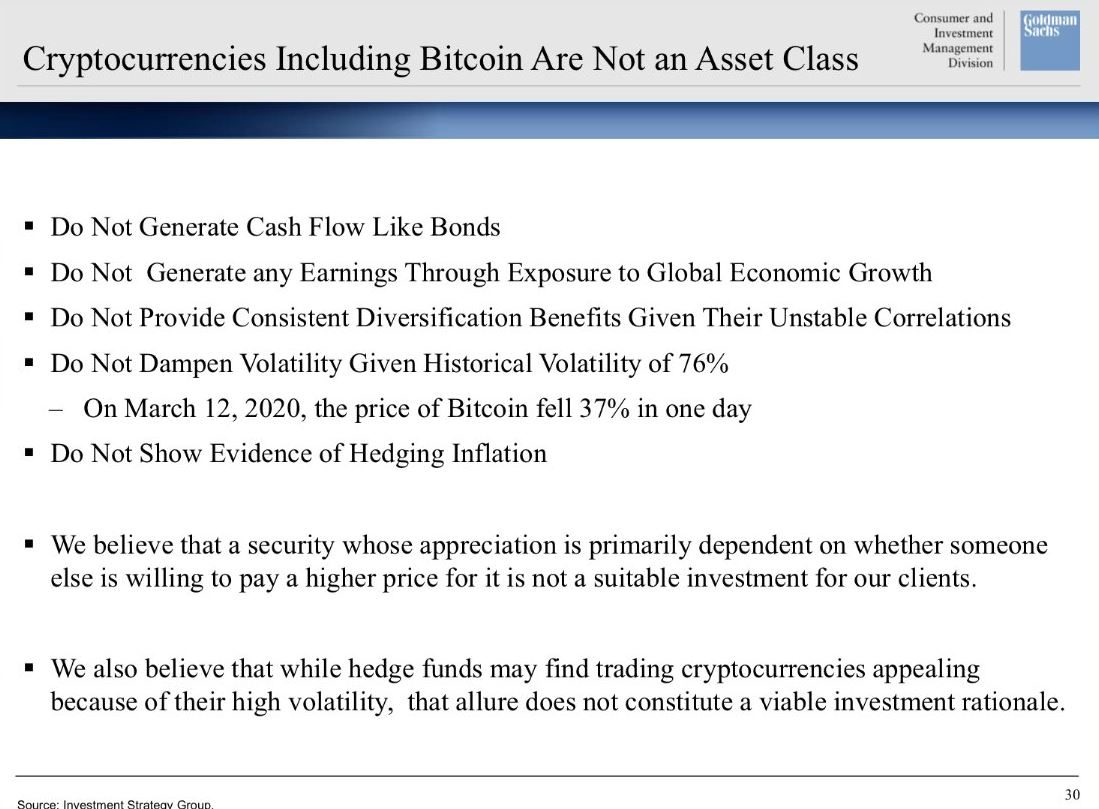 The gist of the crypto community's feedback was that it must have been amateur hour at Goldman Sachs.

"Goldman got a lot wrong here," said TradeBlock analyst John Todaro. He noted that staking cryptocurrencies generates cash flow similar to bonds, Bitcoin does provide diversification benefits and it's ridiculous to say it shows no evidence of hedging inflation because "inflation is not here yet, but once it is BTC will hedge it".

"They just said: 'Cryptocurrencies are not scarce commodities and even Bitcoin has forked and we now have Bitcoin Cash and Bitcoin SV'. This is such a terrible argument in 2020 and frankly just shows ignorance. All GS employees interested in BTC must have already left," suggested The Block analyst Larry Cermak. "And there was no Q&A session in the end. They ran through the gold and Bitcoin slides super fast. Huge waste of time."

"As a former Goldman Director of Research I have to say I am disappointed by the lack of rigor in the analysis GS presented. Having said that this was from GS’ consumer and investment management division which is not known for their analytic prowess," said another commentator.

And through the presentation, Tyler Winklevoss wondered aloud: "What are you smoking? I thought Goldman was the bank on Wall Street for smart bankers."

Cameron Winkevoss pointed out a factual inaccuracy: "Hey Goldman Sachs, 2014 just called and asked for their talking points back. Bitcoin was declared a commodity by the CFTC in 2015 in the Coinflip order...so yea it's an asset whose price is set by supply and demand. Just like gold. Just like oil. It's a commodity."

Others pointed out that the whole foundation of Goldman Sachs's argument was built on shaky ground and the assumption that the greenback will not be debased. Of course, if Goldman Sachs clients weren't worried about the shrinking dollar, they probably wouldn't have wanted to hear about Bitcoin.

“The strategists’ starting point is that the USD will not be debased and moderate real economic growth will return," pointed out NEM Trading CFO and managing director Iain Wilson. "Given the public deficits and unprecedented quantitative easing (QE) combined with negative rates starting to be priced in, he seems a bit too sure of himself to start off with the assumption that the USD will not be debased."

Others noted that the entire circus was built around a primitive understanding of cryptocurrency, where Bitcoin is the only game in town and the only thing every other coin does is prove that Bitcoin is not scarce.

"It's easy to focus on just Bitcoin, but it's unfortunately become a black hole consuming far too much of the attention and perceived validation of an entire ecosystem's work at creating new means for value transfer, programmable capital, and decentralised financial services," said Kevin Sekniqi, co-founder of AVA Labs. "Just outside the frame is massive progress and pockets of true innovation across the ecosystem toward networks that carry Bitcoin's vision forward into the next generation of blockchain technology."

Get started with crypto

Find out which crypto wallet is best for you.