How to stake Invictus (IN)

The decentralised reserve currency offered by Invictus is called IN. Invictus has built a treasury of reserves that backs the IN token to provide a floor price. The treasury is bolstered by a basket of decentralised assets including mSOL, USDT and USDC. The high reliance on both USDT and USDC should, theoretically, add far more stability to the protocol in comparison to competitors.

In comparison to the parent Olympus DAO, Invictus also benefits from the incredibly high transactions per second (TPS) and incredibly low fees of the Solana blockchain.

Investors can interact with Invictus through either staking or bonding. Users can stake IN tokens to earn more IN or buy IN at a discounted rate via the protocol - known as a bond. Both bonding and staking boost the treasury that backed the IN reserve currency.

It is the intention of the protocol to eventually convert the protocol into a community-controlled decentralised autonomous organisation (DAO).

How does staking Invictus ($IN) work?

Staking is a method that allows investors to earn rewards from cryptocurrency assets.

Technically, the true process of staking involves locking assets within a Proof-of-Stake blockchain to help validate transactions and secure the network. However, many protocols, such as Invictus, now offer users the opportunity to earn rewards through a variety of other mechanisms. In the case of Invictus, staking is a way to distribute profits that are generated by the protocol's treasury.

Like Olympus DAO, to encourage adoption and generate liquidity for Invictus, the protocol employs 2 key mechanisms - staking and bonding. While bonding is a way to generate profits, staking is a method to incentivise liquidity provision.

Contributors who stake IN tokens receive rebasing rewards every millisecond. Stakers receive these rewards because they are actively contributing to the treasury and total value locked, thereby increasing the value of Invictus.

Unlike other decentralised reserve currencies, Invictus takes an innovative approach with regard to rebasing. Similar protocols employ a rebase that occurs every 8 hours. However, Invictus's rebasing occurs after every block - which means rewards are updated every millisecond. This is better known as Dynamic Rebasing.

Every millisecond, the Invictus protocol distributes tokens by sending them to the staking contract. This creates an imbalance between the number of IN staked to sIN tokens held by stakers. To correct for the difference, Invictus increases sIN bringing the supply of IN:sIN back to 1:1.

According to Invictus documentation, with dynamic rebasing, the effects of auto compounding are faster which means staking can potentially earn more rewards for investors

How to stake Invictus ($IN)?

The most common way to purchase IN is through a decentralised exchange (DEX) that exists on the Solana blockchain. This can be completed using a stablecoin, such as USDC, and a Solana-based Web 3.0 crypto wallet, such as Phantom. For more information on Phantom check out our Solana wallet guide here.

Below are instructions that will help you purchase $IN through a DEX and then stake it using the Invictus DAO website.

Step 2. Transfer USDC to Solana Web 3.0 wallet. Once USDC has been acquired, send the USDC to a Solana-based web 3 wallet like Phantom

Tip: Remember to keep your mnemonic phrase safe and don't ever share it

Step 3. Exchange USDC. After securing USDC within a Solana-based Web 3.0 wallet, the next step is to exchange USDC for the IN token. This can be completed using a Solana decentralised exchange aggregator, such as Jupiter.

Note: you will also require a small amount of SOL to complete transactions on the Solana blockchain. You can find a list of exchanges that sell Solana (SOL) here. 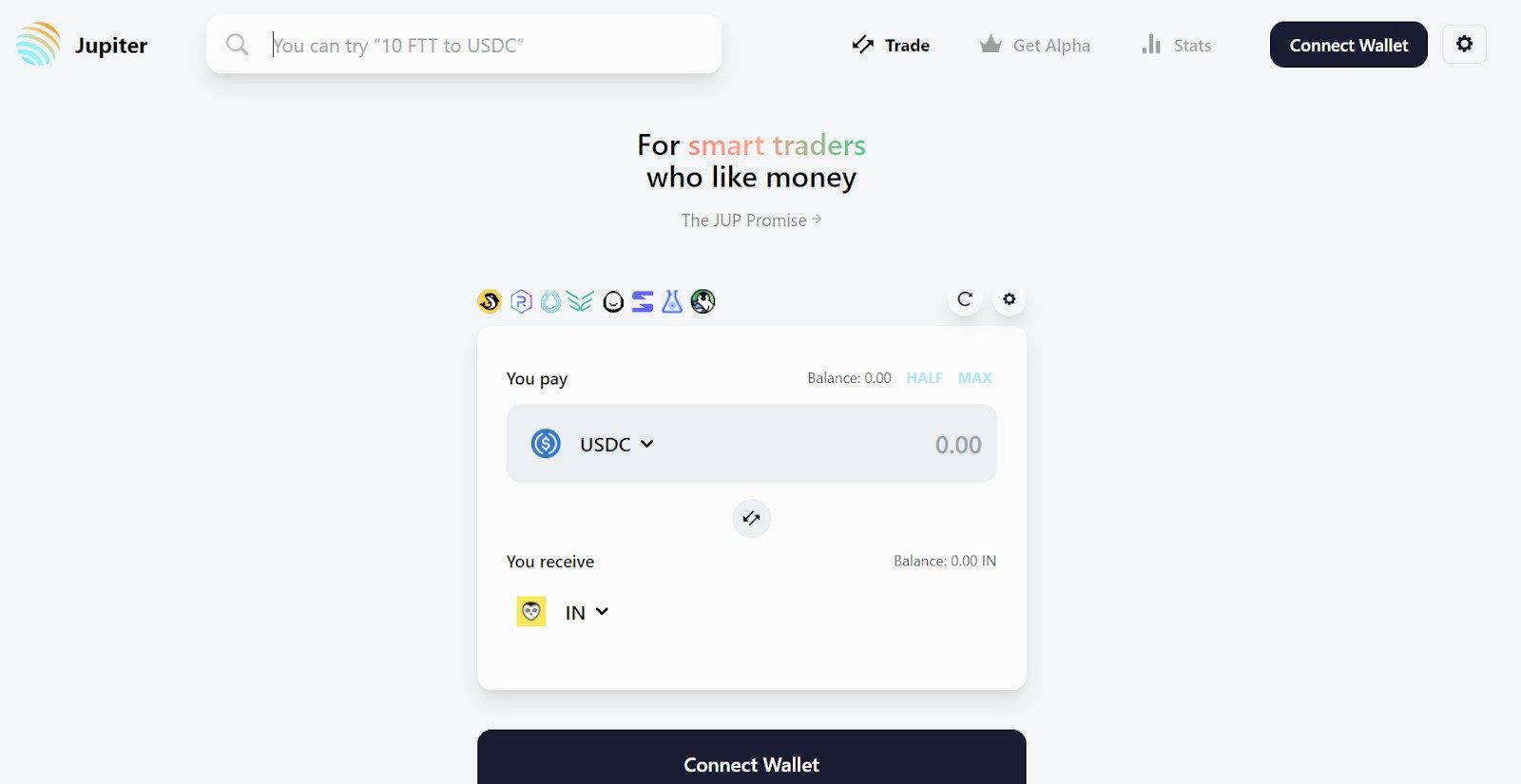 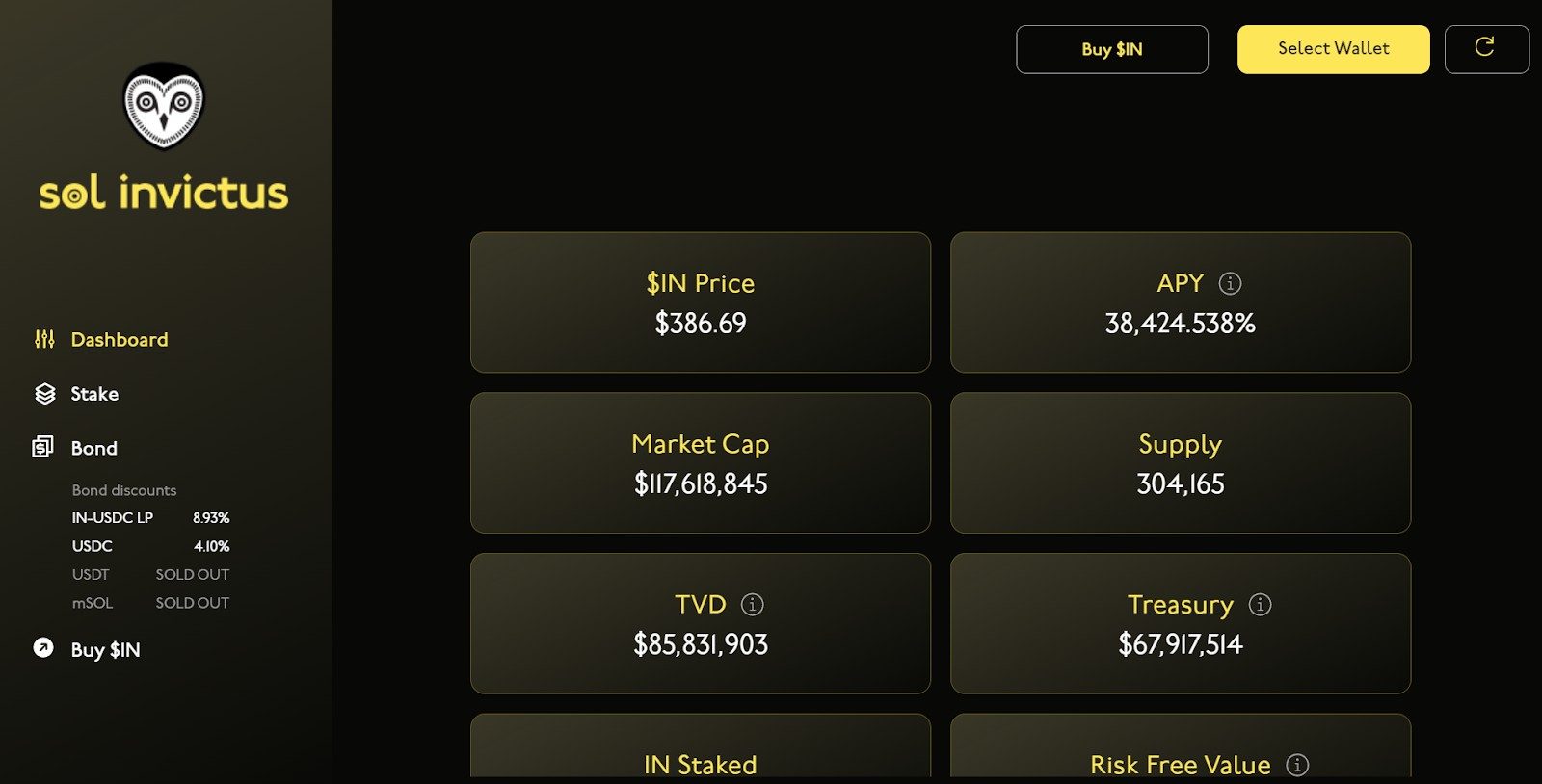 Step 5. Stake your IN tokens. Once your wallet has been connected to Invictus, click on "Stake" in the menu on the left. On the following page, type in the amount of IN you want to stake and click "Stake IN". You will then be prompted for authorisation to complete the transaction within your Phantom wallet. Once the transaction has been processed across the Solana blockchain, your IN tokens will begin staking. You should receive the liquidity provider sIN tokens in your wallet. These will accrue interest and can be used when you want to unstake IN. Rebase rewards will be automatically updated every millisecond so you should be able to see holdings increase in real-time.

How much can you earn by staking Invictus ($IN)?

The amount that can be earned for staking IN within Invictus will vary based on a number of factors. These factors include how much you deposit in the protocol, how much the price of IN varies and how many others decide to stake IN tokens.

While APY rates may be initially high, as more people begin to use the protocol, APY rates are likely to decrease as the stability of the platform improves.

IN is also an inflationary token. As more IN is generated each day, the scarcity of IN is likely to decrease over time which could negatively impact value. With that being said, the high APY staking returns should mean that you still come out with a profit even if the price of IN falls - although there are no guarantees.

Invictus DAO has been operating for almost a month (as of December 2021) with no notable hacks or security breaches. As previously mentioned, the protocol is based on Olympus DAO, which also hasn't incurred any notable hacks throughout 9 months of activity. Invictus has a strong community and has $74 billion in the treasury within a month.

Like similar, newly established, reserve currency protocols the developers of the core team are unknown - which may be enough to turn some investors off. Unlike Olympus DAO, the protocol has not yet been audited, with the team favouring a production launch rather than postponing to wait for a code audit.

As a result, like all most DeFi applications, Invictus may be subject to unknown risks, such as smart contract bugs or exploits. While based on Olympus DAO, Invictus has been completely rewritten in the native Solana Rust programming language, which may mean unexpected errors are more likely in comparison to competitors. While there are no clear warning signs at the time of writing, as with anything in crypto, only invest what you can afford to lose.

With any new investment tool, particularly in the cryptocurrency industry, the risks are significantly higher. This is especially true for an experimental and ambitious project such as Invictus. While the high rates of return are attractive, the technology and mechanics behind Invictus are incredibly new and have not yet stood the test of time - but new users are rewarded for taking that additional risk.

When deciding if this is the right investment choice for you, remember to weigh up both the risks and potential rewards. Determine your tolerance for new investment technologies, and only invest what you are willing to lose.

Thomas Weston is a venture analyst at Finder. Thomas is an avid investor who specialises in analysing upcoming cryptocurrency and web3 developments. Thomas is studying finance, econometrics and creative intelligence and innovation at the University of Technology Sydney.