Dogecoin: How high can it go? 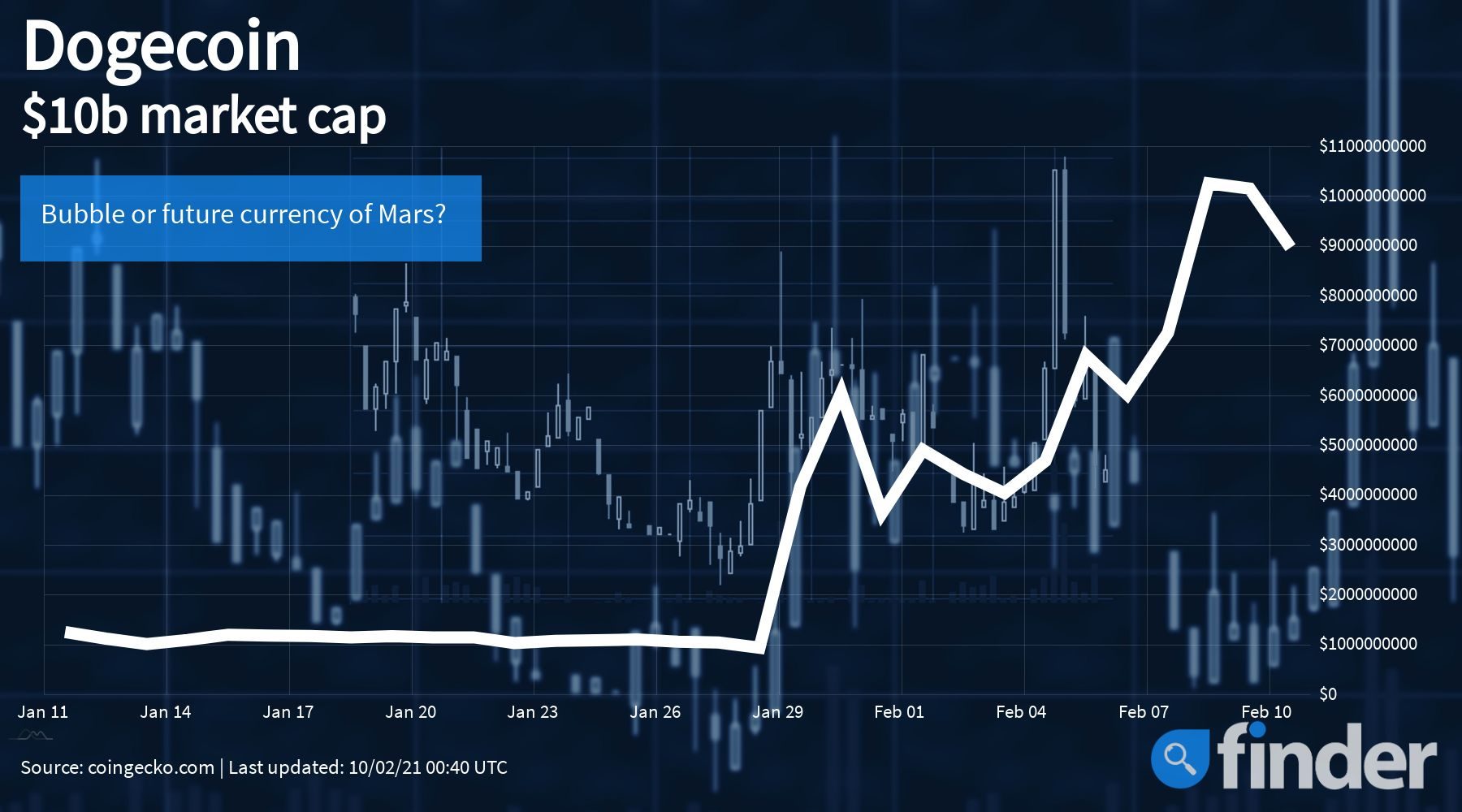 Shockingly, this Dogecoin frenzy might turn out to be a doomed speculative bubble.

Its run comes largely thanks to continued advocacy from Elon Musk, the world's number one rich person and number one Dogecoin fan, and thanks to a Gamestop-like frenzy engulfing it.

But how high can it go? Is $1 even possible?

One strike against Dogecoin right now is its on-chain transaction count.

It's doing about 50,000 on-chain transactions per 24 hours at the moment, even as it's seeing tens of billions of dollars in trading volume across exchanges.

This is extremely low. It's among the lowest of any major coin by a sizable margin, which is pretty impressive given that this is the trendiest Dogecoin has ever been and that it's seeing orders of magnitude more trading volume than other coins.

This implies that practically no one is actually using it for anything except speculation, and that the only action is happening on exchanges.

The effect of this can be seen in Dogecoin's remarkable, even by crypto standards, volatility. On 29 January it only took a few hours for Dogecoin to more than double in price to its new all-time high and then fall 50%. It has repeated that pattern a few times since then.

Dogecoin's developer activity is also a wasteland. There are no active Dogecoin developers and the coin's codebase hasn't been touched in years.

Dogecoin's continual inflation doesn't do it any favours either. Miners are currently churning out more than 13 million DOGE per day, equivalent to about $1 million per day at current prices.

The market has to keep absorbing that for prices to keep rising, and the more prices rise the higher the dollar value it needs to absorb. Dogecoin's tokenomics and nature mean it likely gets dragged down fast if it gets too high.

The key takeaway for speculators here might be that there really is no end game or purpose to the coin. The only thing it's good for is trying to sell it at a higher price than you bought it for.

It's like a game of musical chairs. A new wave of interest has turned up the music, but eventually people will get bored of it and the music will stop. The way to win the game is to sell DOGE at a profit before that happens.

It's worth emphasising that this is very much a competitive game. Anyone hoping to turn a profit from DOGE is competing against many other players trying to do the same.

It doesn't matter that you're just playing for fun, because your opponents aren't. The profits and losses on the joke coin are serious business, and as long as volatility and hype surround DOGE, the serious players will keep playing the game.

Each rise will continue being followed by a sharp dump, because as long as DOGE continues rising the serious players will continue dumping it.

The question for speculators then is how long you can play chicken with the dog. How long until the music stops and anyone left holding a bag becomes a loser?

Price targets are unhelpful in this respect. Because DOGE has no functional value there's no reason it should be 9 cents each instead of 8. Playing the game with price targets invariably means aiming at arbitrary and potentially unobtainable goalposts. It's a good way of setting out to lose before you even get started.

The oft-mentioned $1 Dogecoin goalposts are especially unobtainable, and it's safe to say anyone holding out for those is probably not on a winning strategy.

For perspective, even at $0.50 per DOGE, holders of the world's richest Dogecoin wallet (which is still active with almost 37 billion DOGE) would be ranking among some of the world's wealthiest people.

A more useful answer might lie in the typical lifecycle of meme pop culture fads, since that's exactly what Dogecoin has become.

Each trend generally only has a few months of life in it before the white-hot ball of public attention shifts somewhere else. Buying DOGE on the upswing of its 15 minutes of fame could be a good bet, getting stuck with it on the downswing may be inadvisable.

While it's not entirely clear where DOGE is in its cycle, a cautious approach would point at the downswing.

Firstly, each subsequent Elon Musk Dogecoin tweet is pumping the market less and less, and now that Tesla has publicly revealed it bought $1.5 billion of Bitcoin, rather than DOGE, interest could wane a bit. Secondly, now that the recent Gamestop and Wall Street Bets hype is tapering off, Dogecoin has lost one of its sources of rocket fuel.

And thirdly, the only thing newsworthy about Dogecoin is its price action, which is only newsworthy because it's ridiculous. With the gravity of inflation and a constant stream of sellers pulling DOGE prices down, it's likely that a lot of the current Dogecoin hype and attention will fade away if prices don't hold up.

At this stage, the safest way to win the Dogecoin game might be to not play at all.

Fortunately, there are plenty of marginally less insane things to buy in the world of cryptocurrency, including DeFi cryptocurrencies that are now racking up measurable cashflows for token holders and finding more organic demand in the market.