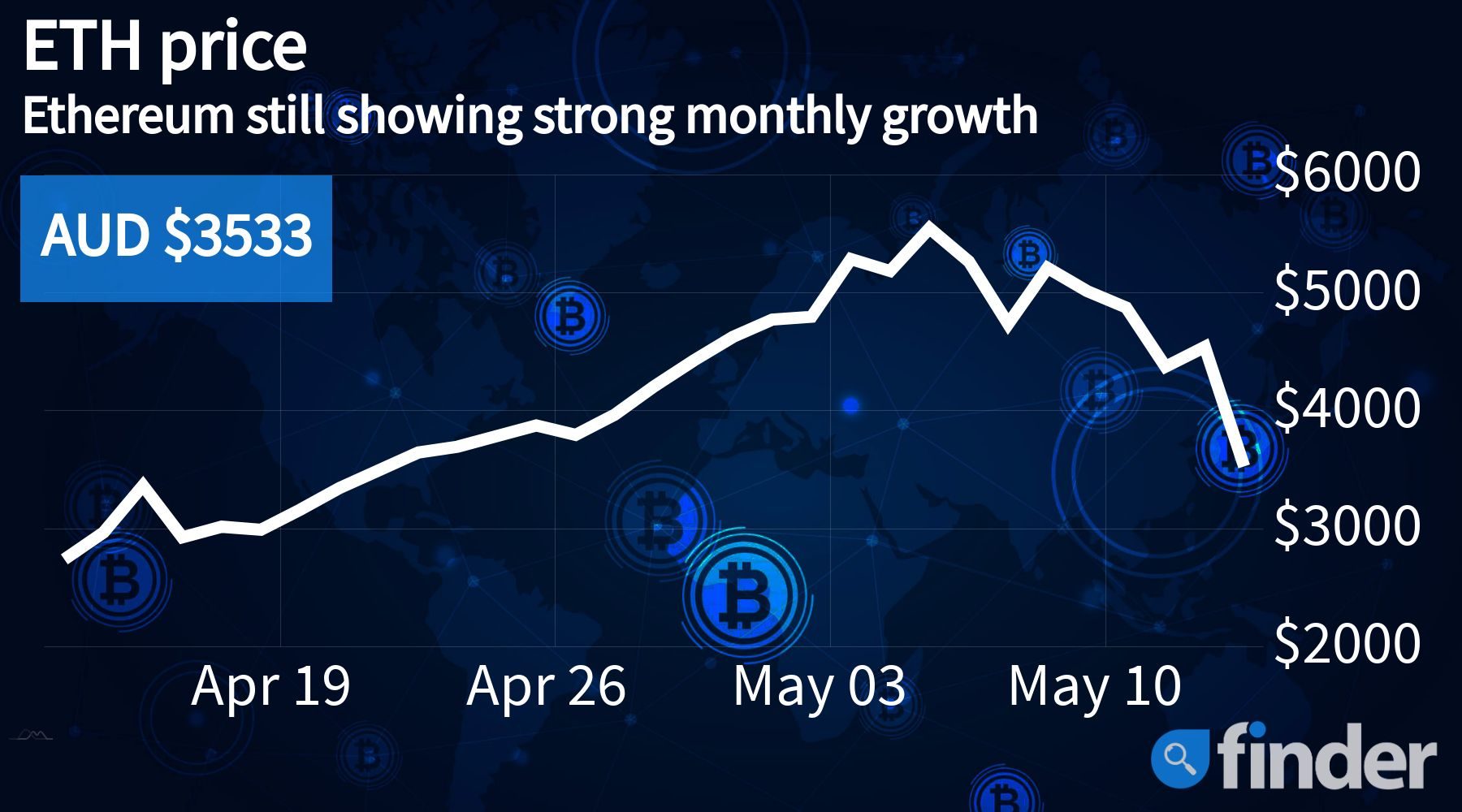 Despite the ongoing market onslaught, ETH is still showcasing monthly gains of over 20%.

Ether has been on the receiving end of some serious bearish action, with the premium altcoin dipping by nearly 15% over the course of the last 24 hours. As a result, the currency is now trading at AUD$3,360, down from its high of $5,600, a price point it scaled up to less than a fortnight ago.

To gain a better overview of what might be causing this value decline, Finder spoke with Kadan Stadelmann, chief technology officer for Komodo, a blockchain solutions provider. In his view, despite a lot of positive news recently surrounding Ethereum's adoption by institutions and excitement around Ethereum 2.0, the currency may continue to drop along with a number of cryptocurrencies, adding:

"ETH was overdue for a correction, considering the massive run-up we saw over the past month. It's only natural that the price in terms of USD value will drop more percentage-wise. Regardless, Ethereum has received a lot of positive attention and large outflows from centralized exchanges, which indicates that large players are at least planning to hold ETH for the long term. This is further incentivized by Ethereum 2.0 and its support for staking."

Providing his take on the matter, Antoni Trenchev, co-founder and managing partner at Nexo, a digital asset lending platform, told Finder that Ethereum is at a different stage in its market cycle, highlighting that an increasing number of clients who make use of his company's trading ecosystem are beginning to switch from Bitcoin to Ethereum. "This is because, on the surface, Bitcoin is now where ETH was a few months back, i.e. it hit US$2K in February and then failed to reconquer that territory for more than a month," he added.

It appears as though Elon Musk's comments on the ecological impact of Bitcoin mining have caused quite a lot of negative social media sentiment in relation to Bitcoin in recent days. And given his status as one of the premier technologists in the world, a lot of people seem to take every word of his as gospel these days.

This sort of blind belief is what Gunnar Jaerv, COO for First Digital Trust, a Hong-Kong-based digital asset custodian, believes can be quite detrimental for the digital asset market as a whole in the long run, adding:

"The public is paying attention to Musk but we are already witnessing substantial proof that this argument is false. Analysis suggests that 76% of all Bitcoin mining utilizes renewable energy and there are a plethora of other blockchains and digital assets that will weather this storm because they use sustainable proof-of-work protocols."

For example, the UK-listed cryptocurrency mining company Argo Blockchain announced last week that it had purchased two data centres in Quebec which are powered almost entirely by hydroelectric energy.

Therefore, in Jaerv's view, it is paramount that individuals operating within the cryptocurrency space spend sufficient time researching any such claims before believing social media discourse, especially given the reactivity of so many of the comments that may have driven the crash for both Bitcoin and ETH.