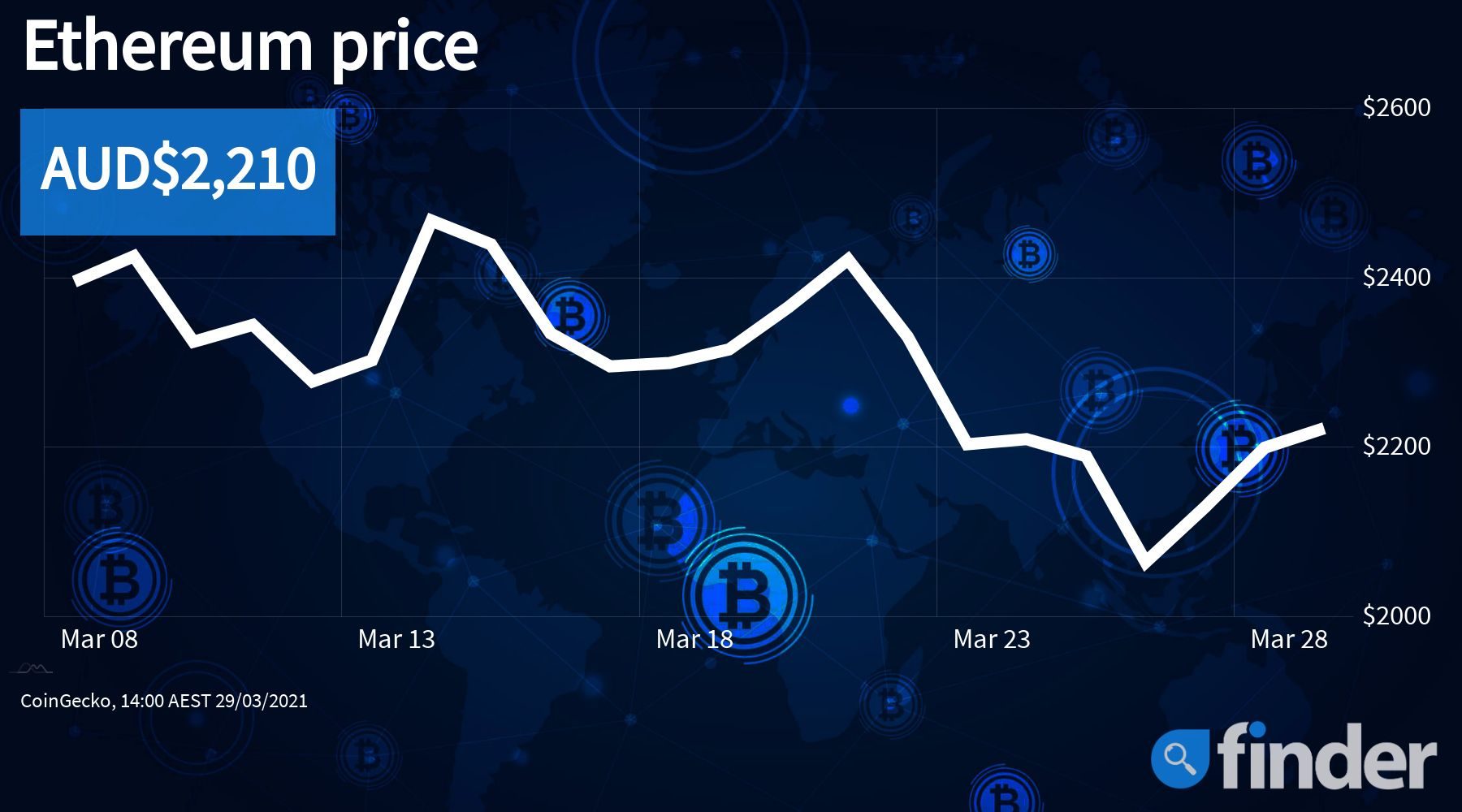 Ether's value continues to slide, demonstrating a 5% loss over the past week.

ETH has been hovering around the AUD$2,200 range for the past 48 hours, following a brief rally over the weekend. At press time, the currency is trading at $2,223.

As Ethereum continues to suffer from growing network congestion and rising transaction fee related issues, many rival chains have continued to grow quite substantially.

This time around, Solana, a scaling-oriented blockchain ecosystem, witnessed a surge of 14% during yesterday's trading cycle. As a result, the altcoin has now grown by nearly 30% in value since March 21.

Solana has time and again been grouped alongside a number of other so-called "Ethereum Killers" such as Cardano, Polkadot, Tron, since it boasts of a transaction throughput rate (TPS) of more than 50,000 tx's per second. And while Ether's 2.0 upgrade was touted to amp up the currency's native tx capacity upward of the 100k mark, the number still continues to hover around just 14 transactions per second.

Lastly, it should also be pointed out that Solana is backed by a founding team that has on its roster a number of high-profile engineers who have previously worked for established tech entities including Intel, Dropbox, etc. Not only that, the project was also recently able to rope in a sizable amount of new capital recently, raising a cool $40 million from prominent crypto exchanges such as OKEx and MXC.

An analysis of Ether's current state

As Ether rivals continue to garner an increasing amount of mainstream traction seemingly with each passing day, Finder reached out to Raphael Shmertz, CEO and managing partner of BR Capital, a crypto economy and blockchain-focused fund, so as to gain a better understanding of whether any project actually stands to overshadow ETH in the near future. In his view:

"I don't believe that any network will succeed in overtaking Ethereum, even though right now Ether is somewhat vulnerable. The interest is indeed shifting to second-layer solutions and other blockchains, but nobody can possibly catch up with Ethereum, let alone gain the upper hand."

He added that as the digital currency ecosystem continues to mature and grow, we will see more and more development activities take place within the context of cross-chain interoperability, wherein different networks will be able to communicate with each other. "But even in this scenario, Ethereum will still dominate", Shmertz suggested.

His conviction in Ether is firmly rooted in the technological potential that the upcoming London hard fork — which includes EIP 1559 — possesses. As pointed out by Finder earlier, EIP 1559overhauls the Ethereum fee system: instead of paying variable gas fees to miners, users will send a set 'base fee' to the network, and this base-fee will be burned. In practice, EIP 1559 introduces deflation, and this deflationary pressure is the first reason why many believe ETH will grow.

Not only that, EIP 1559 makes fees predictable and hard to manipulate. The base-fee can go up or down by a maximum of 12.5% per block, thus ensuring that there are no sudden spikes or dips, providing further assurance to network users.

Commenting on Ethereum's current state, Konstantin Anissimov, Executive Director for cryptocurrency exchange CEX.IO, told Finder that while the platform has its problems — such as the high gas fees, scalability issues — there are a number of other factors as well that work in the currency's favor, adding:

"It is the birthplace of smart contracts, dApps, the majority of DeFi protocols and altcoins, and now, another trend has started on it — the so-called NFT craze. So, while Ethereum does have its issues, it is unlikely that it will ever be overtaken or replaced by other projects anytime soon. After all, its issues are likely to be largely resolved with the launch of Ethereum 2.0, and the only thing standing in its way is time."

He further opined that with a bit of patience, the blockchain will return to being reliable and fast, which is why its price performance is also likely to improve, especially when the upgrades start to come in.

Lastly, on the subject of Ethereum's strong monetary correlation with Bitcoin in recent times, Shmertz believes that the trend is temporary as both currencies are based on business models and economic structures that are completely different. Not only that, he opined that as we head into the future, Ether will once again start to showcase an increasing amount of independence from the latter, adding:

"Even though the price of Bitcoin and Ethereum are showing a strong correlation, we expect to see a decoupling in the future. In the future, once there is a clear distinction between what Bitcoin is and which problems it solves, on the one hand, and Ethereum's use cases, on the other hand – such as DeFi – their prices will move mostly independently."

That being said, Shmertz did concede that almost all of the currencies in the top 5-10 will continue to be tied with Bitcoin since it is, after all, the clear alpha of this space. However, heavy correlation-based value swings will most likely become increasingly less noticeable with time.

Still not sure about what a Non-Fungible Token (NFT) is exactly? Well, in case you need some help, the Saturday Night Live (SNL) team has you covered. As part of a recent skit, the crew showcased United States secretary of the treasury Janet Yellen speaking to a university economics class when a student interrupts her asking her about NFTs.

What follows is a rap-fueled verbal explanation of what these unique tokens are by Pete Davidson (dressed as Batman's sidekick Robin) and Chris Redd (garbed up as the Matrix's Morpheus) and how they stand to change the global digital collectible landscape in a big way.

The skit is just one of many examples of how NFTs have been gaining an insane amount of mainstream traction in recent months. For example, recently, Jack Dorsey was able to sell Twitter's genesis tweet for a whopping sum of AUD$3.8 million while digital artist Beeple was able to sell a collage of his works in the form of an NFT for a staggering $90.36.