Ethereum price breaks US$3,000 for first time – worth more than Disney, PayPal and Nestle 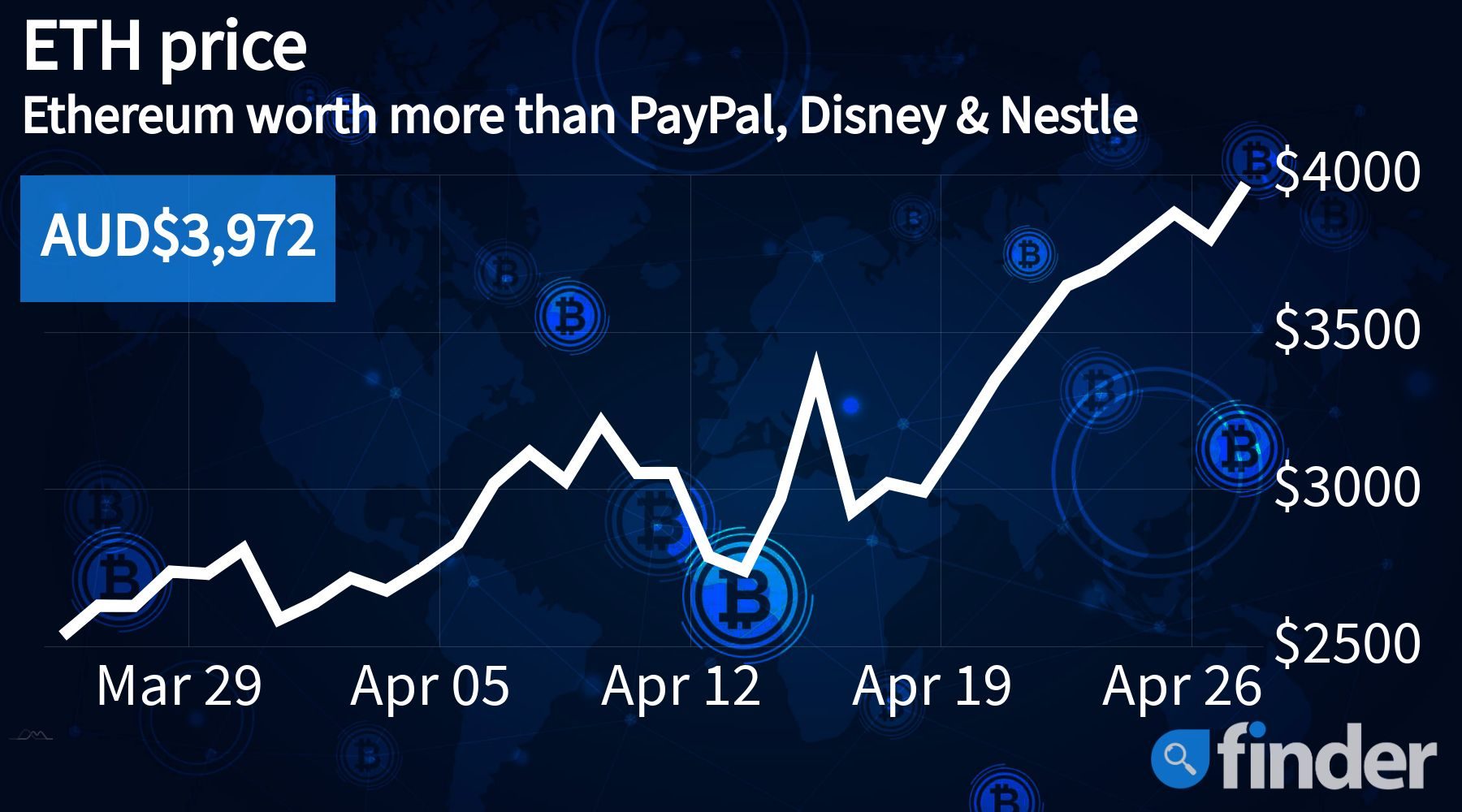 Ethereum has cemented itself as one of the most valuable financial networks in the world, with US$70 billion locked up in DeFi protocols alone.

Ether backers all over the world seem to be rejoicing at the moment, especially as the second largest cryptocurrency by total market capitalisation continues to scale up to fresh all-time highs, seemingly every other day. In this regard, over the course of the past week, ETH has gained over 30% in value, taking the price of a single token up to US$3,000 (AUD$3,950).

To gain a better idea of Ether's ongoing rise as well as its future price action, Finder spoke with Sebastian Bürgel, the Founder and CEO of Web3 data privacy-protecting protocol HOPR. In his view, ETH has finally decoupled from BTC, something that many experts had been predicting for quite some time now. He added:

"The breakout is no surprise if you've been following the developments of not just the past months but really the past 2 years. I'm certain that the Ethereum price is primed for a bright future as the biggest game changers are only about to be released over the next months. What we're about to see are the biggest changes since the Ethereum Genesis block."

Bürgel also highlighted that over the course of the last few months, an increasing number of Layer 2 solutions have been adopted by many ETH-driven platforms, causing gas prices to reduce considerably from just a few months ago.

For example, during the latter half of February and March the average cost of facilitating transactions on the Ether network was hovering around AUD$30. However, since then these numbers seem to have dropped quite considerably, currently skirting around the AUD$7-$10 region.

Lastly, with the upcoming EIP 1559 scheduled to go live in July as well as the success of the recent Berlin Hard Fork, it seems as though Ether will continue to remain in the green, at least for the foreseeable future. Not only that, with the ETH2 merger still looking like a major possibility by the end of this year, Burgel believes that the "million dollar daily sell pressure" that ETH currently faces from its miners will be "gone forever". He closed out by saying:

"It's very hard to imagine a bear market for all of that. The Ethereum application ecosystem will become cheaper, more user friendly and more private - I couldn't be more excited about that future."

Since the start of the year, ETH's price has rallied by more than 200%, resulting in the altcoin's market capitalisation growing to a whopping US$352 billion (AUD$436.5 billion). As a result of this push, Ethereum's total combined value now exceeds that of major firms including Nestle (US$337 billion) and PayPal (US$307 billion).

Not only that, ETH's net capitalisation currently stands ahead of giants such as the Walt Disney Company and Bank of America, Proctor & Gamble, and Roche, with the trend most likely to grow as the currency continues to come of age and break out as an independent asset.