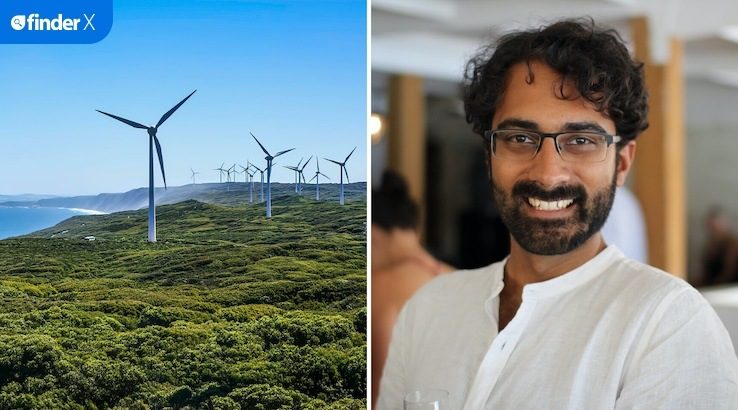 Australia has recently come into sharp focus on a global scale. I know this because after I left the country to work abroad with my family, the summer bushfires drew an immediate response from everybody I met.

First came the sympathy: "The fires are horrible, we hope for the best". And then, the bemusement: "But you rely so much on fossil fuels, maybe this will change things?"

This decade has begun with a stark reminder: decisions around energy have a direct impact on human safety, and no country is immune to this causal relationship. If we want a clean energy revolution in Australia, we first need to understand our potential. Here is a look at four of the biggest factors we need to consider as we move forward.

In 2019, Australia had both its hottest and driest year on record. A recent special issue of Nature: Climate Change addresses the disastrous bushfires that were sparked to life in the context of these two climate change related records.

"These unprecedented fires may indicate that the more flammable future projected to eventuate under climate change has arrived earlier than anticipated," wrote one paper.

It is far too early to understand the impact of the fires on Australia's economy, communities and individuals as well as its creatures and landscape.

But so far, we know one small thing with confidence: Australia is far more vulnerable to the world's climate trajectory than most had assumed. It is also deeply connected to the causes of this global shift.

The core reason the Earth's atmosphere has warmed – contributing to Australia's record-level bushfire conditions – has been the release of greenhouse gases from human activities including the burning of fossil fuels. At the heart of the issue is coal, a carbon-rich fuel source that can be burned to generate energy, both for electricity and heat.

Coal is responsible for roughly one third of energy related emissions and is the single largest contributor to the earth's 1 degree temperature increase (making up 0.3 degrees of the increase). It is also Australia's fossil fuel of choice, having dominated the country's main east coast electricity grid for quite some time. 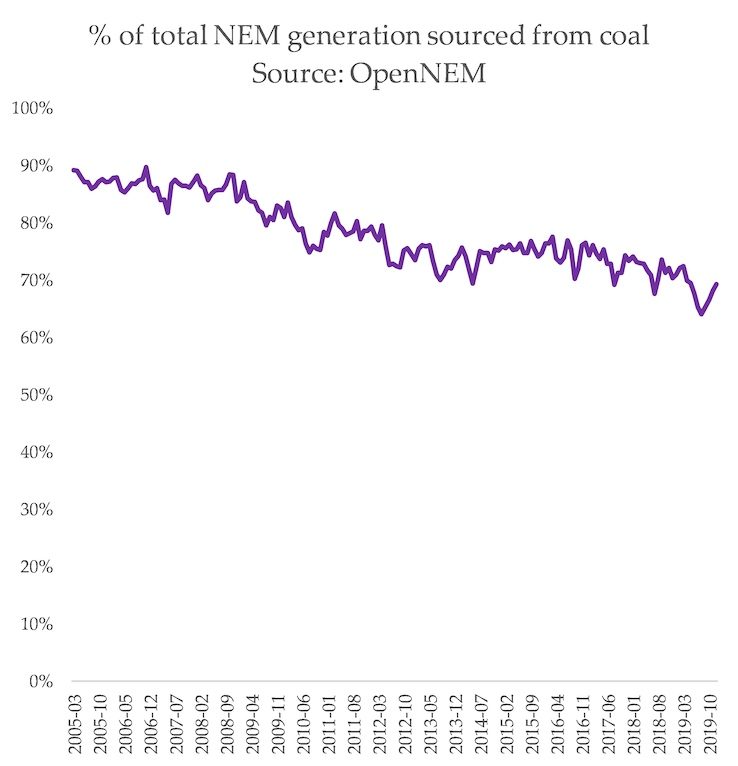 The above is a stark chart to see when we are already so deep into a fossil-fuelled global problem. But it is worth stepping back and considering just how much dominance coal has in Australia's electricity mix, compared to other countries.

The large oil company BP (which recently made headlines promising to cut its emissions to net zero by 2050) released an annual data set called the "Statistical Review of World Energy". Here, we can see just how reliant Australia is on coal in a global context. 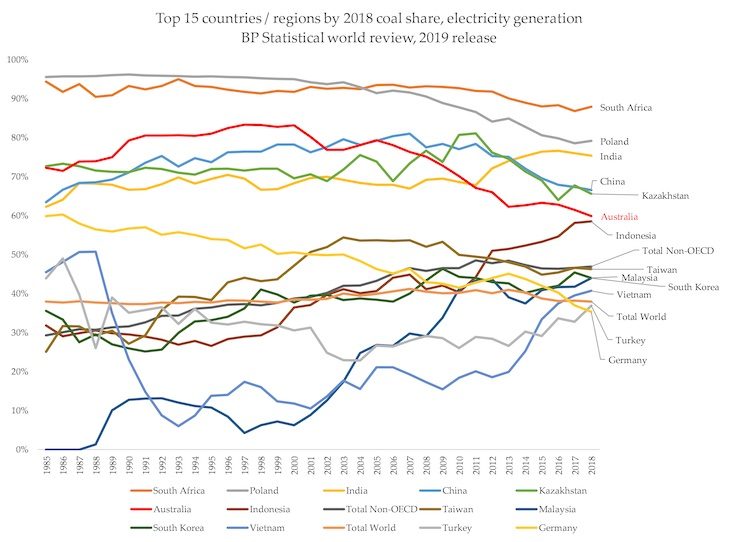 Australia has the 6th highest coal share for electricity generation on this chart. Image: BP Statistical Review of World Energy 2019

While Australia is not at the top of these rankings in terms of generating electricity from coal, it certainly comes close.

It is only since 2010 that it has begun to decrease the proportion of electricity generated from coal, and consequently, dropped below other countries when ranked globally.

This is good news, because the electricity sector is the most readily decarbonised of all the various sectors that contribute to global warming.

It is a long way to the bottom of the rankings, but the potential here is incredible.

Australia has already had some notable success in clean power build-out with the Renewable Energy Target scheme.

Introduced by the Howard government in the early 2000s and significantly expanded by Rudd / Gillard in 2009, this scheme is solely responsible for the country's electricity system hitting a recent milestone of 25% renewable energy in 2019 (up from around 8%, which was mostly hydro, back in the early 2000s).

The Clean Energy Regulator recently found that this scheme was also responsible for roughly 36 megatonnes of CO2 equivalent in the year 2019.

To give you some perspective, all domestic flights within Australia in 2019 were approximately 9 megatonnes of CO2-e. As a consequence of these clean energy schemes, Australia's emissions have, at least, stopped rising. 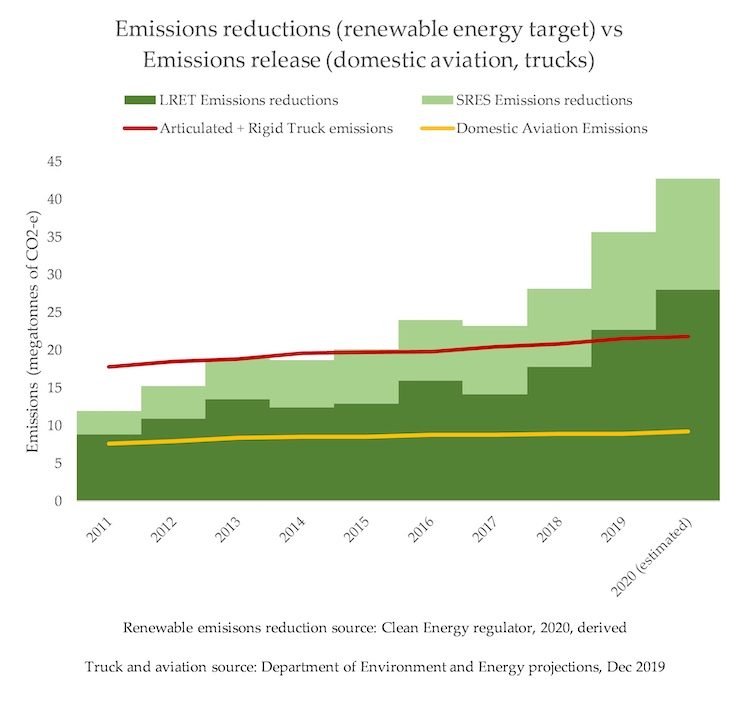 You may have heard that Australia has the "highest per capita installation rate" for renewable energy. This can be a tricky metric, because the country also has one of the highest consumption rates of electricity per person in the world.

This means more energy – of any type – needs to be installed to meet the hungry demand. Regardless, this increase in renewable energy is an incredible start to a process that we know has strong potential.

Australia also has access to two natural resources that support this process: wind and sun.

A draft report released by grid operator AEMO in December 2019 models scenarios in which Australia can fully replace coal-fired power within the next few decades, well before 2050. These scenarios include the expansion of hydro power and transmission networks and a small proportion of battery installations.

Australia's solar potential here is also worth noting. In the grid operator's most optimistic scenario, total zero carbon energy will reach 82% of the east coast grid's total generation by 2042, with rooftop solar comprising 20% of total generation. 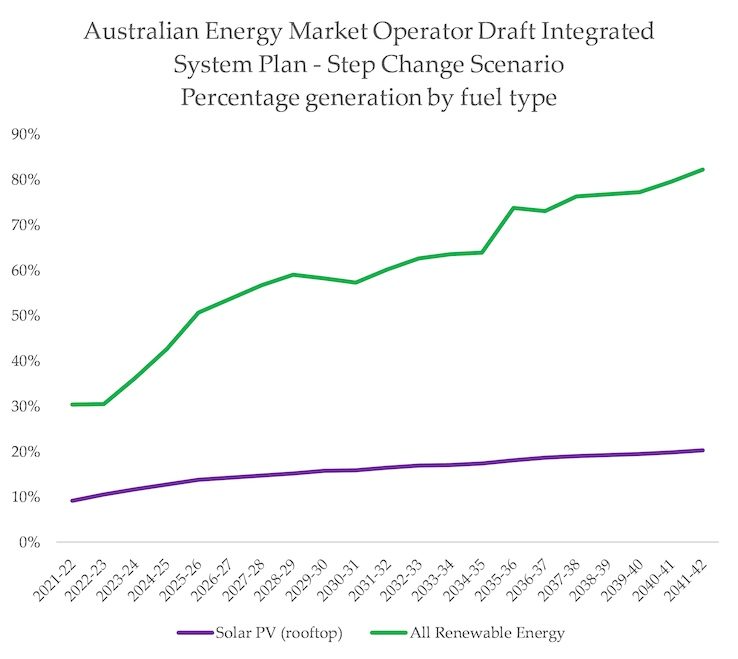 As the Clean Energy Regulator highlighted in its report, the uptake of rooftop solar continues – even as government subsidies have wound down. This is because the technology is popular, it is cheaper and it is a meaningful way for individuals to become participants in decarbonisation.

After a horrible summer, in which many realised Australia's vulnerability to climate change, there will be a significant increase in desire for people to take part in the clean energy revolution.

Australia remains one of the world's most coal dependent countries, but the potential for that to change, in terms of technology, resource and human will, is deep.

Ketan Joshi has been at the forefront of clean energy for eight years, starting out as a data analyst working in wind energy, and expanding that knowledge base to community engagement, climate science and new energy technology. He's been deeply involved in senate inquiries, community engagement with developing wind farms and political debates in the public sphere. He's written for the Guardian, The Monthly, ABC News and has penned several hundred blog posts digging into climate and energy issues – building a position as a respected and analytical energy commentator in Australia. He's served as a subject matter expert on national television and has a wide following on social media around energy and climate.