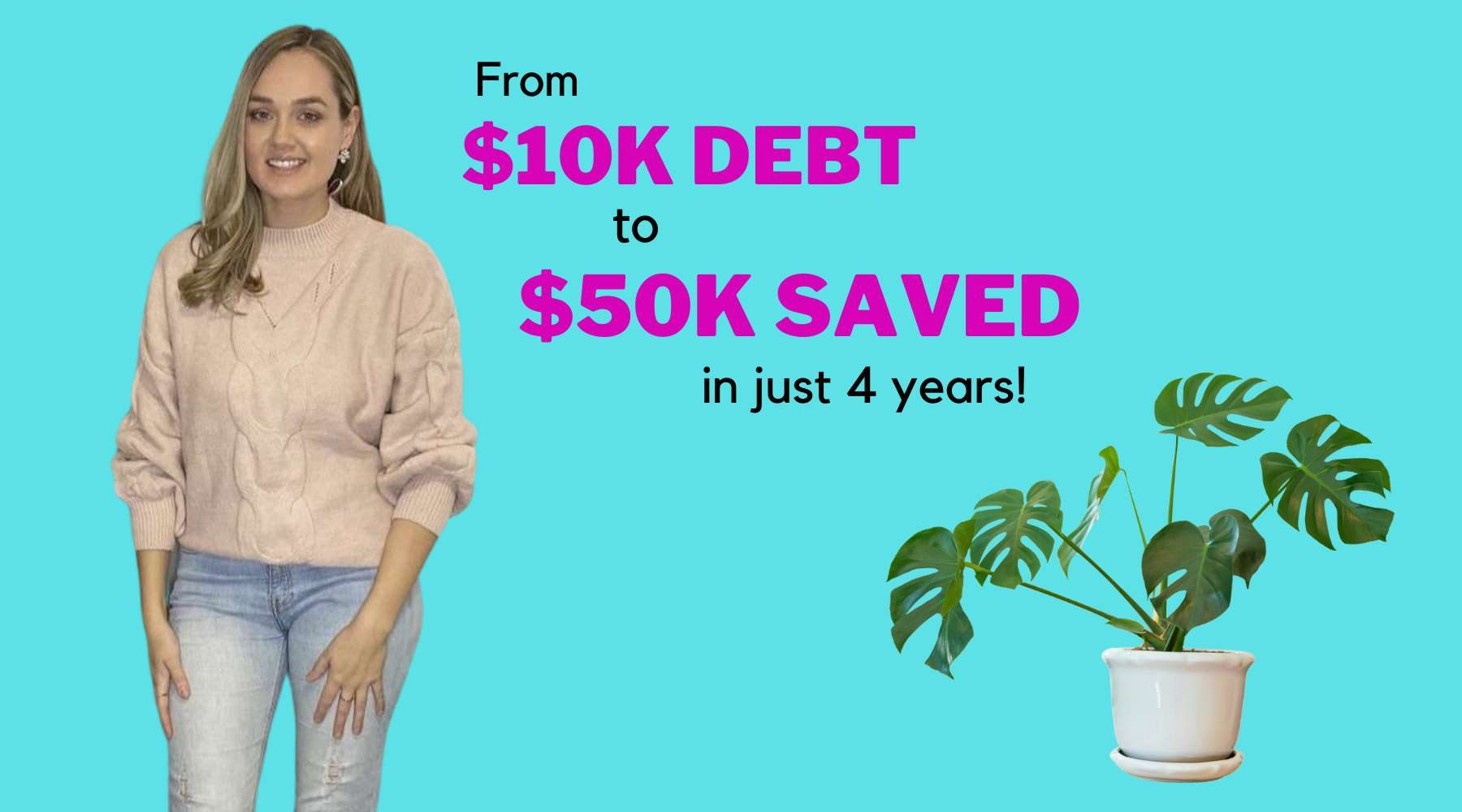 How Eliza paid down her debt, cut up her credit card, saved $50,000 and started investing in a few short years (all while renting in Sydney!).

When Sydney-sider Eliza was 25 years old she was living paycheque to paycheque and had almost $10,000 in credit card debt. Fast forward 4 years and she's got no debt, $50,000 in savings and has recently started investing in the share market.

"I can still remember a few years ago I honestly thought I was never going to get out of it and turn my finances around. I laugh now as I say that!"

Here's how Eliza fixed her finances in 4 years, and how you can too.

How I got myself into a debt spiral

Eliza got her first credit card when she was 21 to use on a 2-month overseas trip in North and Central America and the Caribbean.

"Although I'd saved enough money for the trip, I was told I'd need a credit card to be able to rent a car in the US. I went to my bank, which was CommBank, and without knowing anything about credit cards asked for a low rate credit card. This was mistake number one! I didn't look around at all, because I'd been banking with them since I was 12. It wasn't until years later I realised I was not given a low rate card."

"Although I didn't use the credit card on the trip, I basically spent all my savings. This was mistake number two!".

"I returned to Sydney and had my car registration due, along with a service, pink slip and insurance. I paid these bills using the credit card with the full intention I would pay it off straight away."

However, fast forward a few years later and Eliza was in an ongoing battle of debt.

"I'd pay a bit off then get bills and just put them on the card because it didn't feel like real money. It would go up and down but I could never get on top of it. It seemed like I was drowning."

"The biggest issue, I guess, in this whole thing is that I didn't have an emergency savings fund of my own, so I would just use this and pay it off. But I'd never catch up, I never got on top of it."

How I turned my finances around

Eliza was given a copy of The Barefoot Investor book by Scott Pape for her 25th birthday. She said this was the turning point for her, and when she really started thinking about her future.

"It sat on my bedside table for 6 months until I finally read it, and it honestly changed my life."

"The first step was to put an emergency fund aside with $2,000 in it. You need to do this first otherwise you'll just fall back into the same pattern of paying unexpected bills on your credit card. I sold things online and took extra shifts at work. It took me 10 weeks to get that money saved."

"I then changed my bank account, savings account and super fund. I didn't realise that I'd been paying fees that other banks didn't charge, and I was earning no interest on my savings."

Split your income into different buckets

After she'd saved up her emergency fund and switched her accounts to better deals, she then started to apply the "bucketing" strategy of splitting up your income for different purposes.

"So 60% of my income went to daily expenses; 10% for short-term spending on things like shopping, nights out and activities; 10% is for long-term splurges like holidays; and 20% goes to your 'fire extinguisher' which is to pay off debt."

"Once your debt is all paid off, that 20% then starts going towards savings for things like a house deposit. When I'd paid off the credit card debt I cut up the card which was a super fun day!"

"The book tells you exactly what percentage of your income to put where, which I needed. I thought it was crazy that it was only telling me to put 20% towards savings, because other resources were always telling me to put a lot more into savings. That wasn't realistic, and that's why I think I always failed in the past."

"Everyone's income is different so it needs to work for you. As time went on and I got a better job and earned a higher salary I've adjusted these percentages."

Where Eliza is at now

Eliza said it was very daunting at the start and felt almost impossible to turn her finances around, but it got easier (and more fun) as time went on.

"It's super daunting to do all of this, and it's a lot of time and effort at the start. I didn't sit down and do it overnight, you need to take it in steps and set yourself weekly goals."

"But once you get started it's actually really fun. You start to see the light at the end of the tunnel. Now I can't wait to get paid each week and make those transfers into my different buckets, it's so exciting."

"I've recently also started investing. I think in Australia a lot of people think the only way to invest is in property, and that's certainly the mindset I had. I'm just starting to dabble in shares at the moment and have invested into an exchange traded fund."

Eliza also runs an Instagram page, @bargain_homewares, in her spare time where she talks about her money-saving tips and tricks and shares her bargain finds.

If you haven't looked at your accounts in a while, you could be paying less fees or earning more interest elsewhere. Compare bank accounts, high interest savings accounts and super funds and see if you could get a better deal by switching.