Podcast: does superannuation need a makeover? 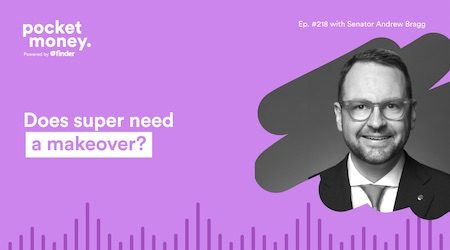 As superannuation heads towards its 30th birthday, some critics are asking if it needs an overhaul.

If you earn a wage in Australia, there is a good chance that you are being paid superannuation. Superannuation or as it's more commonly known 'super', is money put aside by your employer for you which is what you will live on when you hit retirement.

The Superannuation scheme in Australia is now 29 years old, and some are calling for reform to the scheme in some radical ways. Earlier this year, we spoke to Kirsten Hunter from Future Super about how the current system doesn't benefit women and other Australians who don't work full-time for their entire career.

This year has seen the controversial early release of superannuation for some Australians due to coronavirus, while some critics of the current system believe superannuation could be accessed earlier so more Australians can use that money to buy a home.

Senator Andrew Bragg is a senator for NSW and the author of a new book Bad Egg: How to Fix Super

We had the opportunity to chat with Senator Bragg on Pocket Money about his ideas for the future of super which he says needs 'radical surgery', including the idea that Australian's should be able to access their super in order to buy a home.

Discussed in this episode:

The Finder Pocket Money podcast is intended to provide you with tips, tools and strategies that will help you make better decisions. Although we're licensed and authorised, we (and our guests) aren't providing any form of financial or legal advice. So please consider your own situation and get proper advice about your individual circumstances before making any decisions based on anything on our show. Thanks for listening.

Have questions for the Pocket Money crew? Want to suggest a future episode idea? Hoping to speak with other curious young adults sorting through their lives and their money?

Pocket Money is hosted by Sally McMullen and Kate Browne, produced and directed by Ankita Shetty, with editing by Brianna Ansaldo of Bamby Media.

finder.com.au (ACL 385509. CAR 432664) is Australia's most popular comparison site. We like to help, and while we understand that our podcast provides information, insight and entertainment, it's not personal advice. Consider your own circumstances and get advice before you make any decision based on our general comments and commentary.