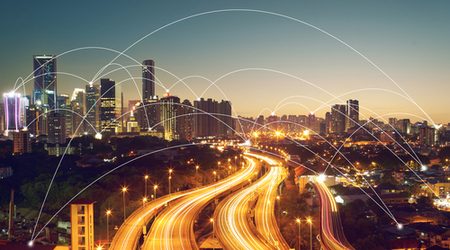 Liberals are also keener on EOS, conservatives go absolutely crazy for DASH, and nihilists do Monero.

The CoinDesk Q2 2018 State of Blockchain report is out and tackling some of the most important issues facing the industry.

It also includes a political affiliation survey of 1,200 cryptocurrency users, buyers and experts, squared with their preferred currency, with some very different results and surprisingly clear trends for different currencies.

Eight different crypto communities were surveyed, bringing out some remarkably sharp differences based on each cryptocurrency's intended purpose.

And Monero, best known for its focus on anonymity and radical decentralisation, was up to 14% all the rage among those who identified as nihilists. 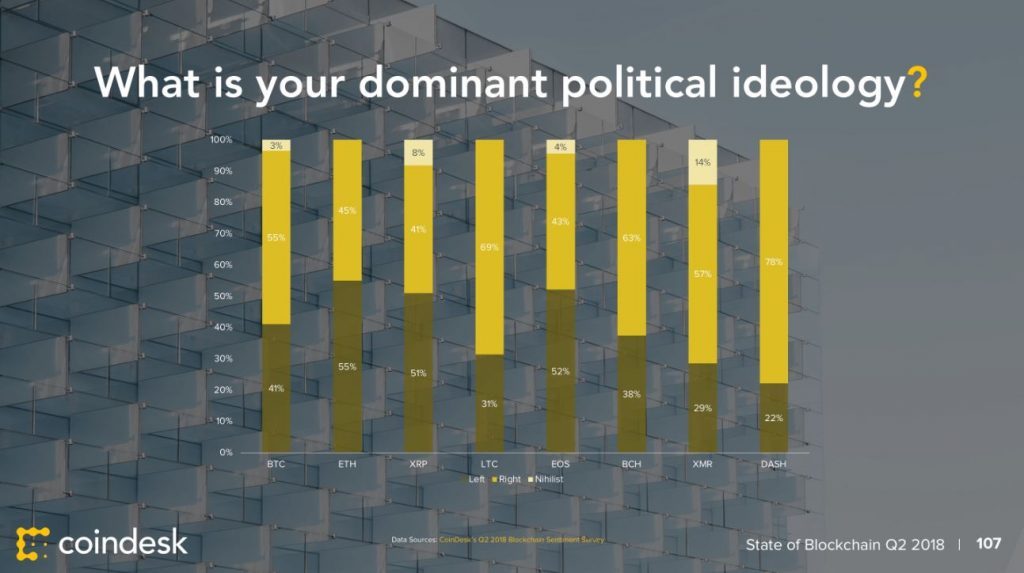 There are some points of interest in each, especially if you enjoy crude stereotypes based on political alignment of the sort which certainly won't be appearing here.

Overall though, it's worth noting that these cryptocurrencies, or at least those who responded to the survey, are significantly more likely to lean to the right than one would expect from a random sample, assuming all respondents were from the USA.

Some background points which may be worth noting:

Cryptocurrency's libertarian origins might be one of the main contributing factors to the right-leaning inclinations of most respondents, as well as the differences between different currencies.

The main difference cutting across the results might be that the hard cash type cryptocurrencies lean further right, while the world computer smart contract type projects learn further left. This isn't entirely unexpected.

Those more attracted to the space by its right-leaning libertarian origins of a new digital gold standard, and a money supply beyond federal control, might be more interested in the cash-type cryptocurrencies that aim to deliver on that front. And those more attracted by the cryptocurrency's globalisation potential and the technology's ability to bring positive change, even under the assumption that it would get strictly regulated and controlled, might have been more attracted to the protocol-type world computer projects.

Some of them are also outliers in various ways.

The survey picked up a relatively ideologically balanced result, with some representation from all three crowds. This might be about as expected based on the wide popularity of bitcoin, and its general purpose usefulness.

It's a currency coin at heart, but as the world's first and largest immutability machine it can still support additional functions, and projects are variously trying to introduce smart contracts to bitcoin, linking their consensus networks to bitcoin's heartbeat and more.

Ethereum is the most left-leaning of all the results. It was pitched as a global world computer, with the potential to really unlock blockchain technology with Turing-complete smart contracts in a way that bitcoin couldn't. It also may have attracted a new generation of users who came for bitcoin but stayed for Ethereum, being intrigued but unimpressed by the former and extremely keen on the latter.

However, the most significant factor might be that Ethereum is inflationary and that its supply is constantly expanding without any set limit. This might have been a deal-breaker for a lot of the right/libertarian-leaning respondents.

The XRP cryptocurrency has been inextricably tied to the Ripple company for a while, and seems to have crossed political lines in the same way as bitcoin. This might be due to the accessible idea of XRP as a company's product, rather than the confusing idea of a completely decentralised currency.

It's also the least popular among self-identified right wingers. This is probably down to its close ties to the Ripple company, suggesting that libertarian roots and the ideas of decentralisation really are at the heart of the statistically-unusual rightwards-lean in cryptocurrency.

Litecoin was one of the first and most successful bitcoin spin-offs to position itself as digital cash next to bitcoin's digital gold standard. It's a very straightforward coin with a quarter of the block time and four times the supply of bitcoin.

Those drawn to the original deflationary currency bitcoin ethos, but who missed the boat on low prices, might have hopped onto Litecoin as a viable-looking alternative.

EOS' marketing was pretty hippy dippy, and it's all about peace and love and organic cooperation between communities. That's left wing, right?

It's still very much about money though.

Setting aside all of the "no I'm the real bitcoin" stuff, most people who wanted to buy bitcoin after the fork would have found their way to the real bitcoin. Or have been deceived into buying the fake bitcoin, as BCH's most ardent fans might see it.

As such, it's reasonable that BCH would skew further right, with much of its user base going back to before the fork.

It's one of the original anonymous coins, best known for its anonymity and ability to facilitate illicit purchases. It's also very much committed to decentralisation, and fighting the power, specifically the ASIC power, by keeping mining in the hands of a wider range of users.

It's understandable that it would be the most popular among self-identified nihilists of the coins surveyed, while also leaning more towards the libertarian/right.

With almost 4 of every 5 surveyed DASH users identifying as right-wing, it might be the rightest-leaning coin around.

This makes sense in a way. It emerged relatively early when the cryptocurrency scene was still more libertarian-leaning, and might have scooped up some of the true believers by introducing privacy elements and strongly emphasising its deflationary programming. Assuming all the wild speculation is correct, it all kind of works out.

The main takeaways from these results for cryptocurrency might be that the space overall is still very much tied to libertarian ideals of deflationary currency, new gold standards and an alternative to "the Fed," and that different coin communities might have stark differences in political outlook. This could affect how people use the coin, and buy or sell it.

For example, a lot of the top market cap coins are largely-interchangeable cash style cryptocurrencies such as LTC and BCH. It might be that the space is simply large enough to sustain more of them, and that their prices tend to be quite resilient on account of attracting libertarian-inclined hodlers via deflationary elements.

Protocol-level world computer projects have also multiplied though, and those which rise up tend to do so with a strong emphasis on their technology. Ethereum invented smart contracts, while Cardano has Ouroborous, IOTA has the Tangle and EOS has the chestahedron. These coins might be less resilient.

But overall it's reassuring in a way that there are sensical differences between different cryptocurrencies. It suggests that most people are actually considering the functionality and merits of individual coins that they buy into, rather than just trying to chase hype.