Which Australian power companies really care about the environment? Find out with the Finder Green Awards.

The 2021 Finder Green Awards for energy was a close contest between companies making major headways in renewable energy, battery storage, and other clean energy technologies.

Couple that with more Australians looking to offset their carbon footprint, and our timing for picking out our green industry champions couldn't be better.

We had three separate energy retailer categories for the 2021 Finder Green Awards. The overall category looks at all providers, but we also split them up further: 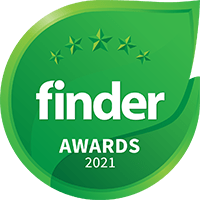 So, who topped our Finder Green charts?

You can find a full list of winners and finalists for the Finder Green Awards here.

Powershop - Green Energy Retailer of the Year
(Overall and Traditional)

Powershop is one of the heavy hitters in the renewable energy space so it's no surprise that it came out on top in two of the categories.

Why was it chosen? It generates 100% electricity from zero emission sources like wind farms, and offers carbon-neutral plans as standard for all customers in Australia.

It also has impressive environmental targets in place and has launched a number of innovative initiatives to support clean technology in Australia.

Energy Locals rose to the top in the retail-only category for the second year in a row. Since launching in 2016, Energy Locals has aimed to put sustainability at heart of its mission as a business and this continues to put them on the front foot of climate action in Australia.

Why was it chosen? Energy Locals has made sustainability and promoting renewable energy one of its main focuses. In particular, it was its efforts in promoting clean technology that set it apart.

What is green energy, and is it the same as GreenPower?

What is carbon-neutral energy?

Carbon neutrality can be a confusing concept. At a basic level it means the environmental impact of an activity or company is offset with carbon credits.

Carbon credits are where things get confusing. They are:

What is the Green Electricity Guide?

While somewhat outdated at this stage, the 2018 Green Electricity Guide can still be used to get a general idea of the greenness" of some Australian energy retailers.

The guide was a joint initiative of Greenpeace and the Total Environment Centre that ranked energy companies across a wide range of factors.

These included many of the same criteria as our own Finder Green Awards, including renewable generation, fossil fuel policy, emissions and energy management schemes.

We've unpacked the energy jargon used above so you can better understand how green power works.

Ben King is Finder’s Head of CSR & Public Affairs. He is focused on increasing the positive social and environmental impact of Finder and working with policy makers on regulation that puts the consumer first. He holds a Bachelors in Business Management from the University of Nottingham.