Leaked texts suggest antivirus pioneer John McAfee was blackmailing rising cryptocurrency Verge with threats of FUD. But could it all be a bear trap? 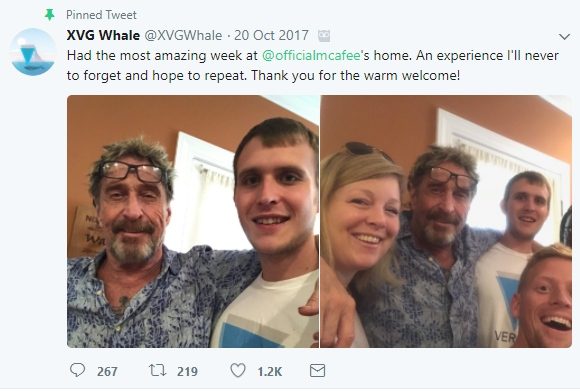 Updated news: Verge has launched Wraith Protocol, but the market has dipped - find out why in this full story.

Original story: The ever-interesting life journey of John McAfee has taken another concerning turn, ensuring 2017 closed with one last controversy. McAfee made a name for himself – and a squillion dollars – with the McAfee Antivirus software and has since gone on to live a colourful life (to put it mildly). We won’t go into all the sordid details here, but let’s just say his bizarre antics have done little to quell his following. The self-processed tech pioneer and chief cybersecurity visionary has 567,000 Twitter followers and a keen interest in cryptocurrency.

Verge, a rising cryptocurrency that many pundits are expecting to have a strong 2018 on the back of a new privacy protocol called Wraith, has been in McAfee’s sights. He appeared to be a vocal supporter of the coin during the year, using his influence to help drive up the price of the coin by talking up its potential.

But he has since flip-flopped. He claims that his phone was hacked and that some of the positive claims he made around Verge on Twitter weren’t true. But is that the truth? Some find it hard to believe a chief cybersecurity visionary who specialises in helping people not get hacked would get his identity stolen. Intrepid members of the cryptocurrency community also claim to have found his positive support for Verge across multiple social accounts, too, adding to the confusion.

Needless to say, the whole situation smells fishy, and it has created some level of fear, uncertainty and doubt (FUD) in the Verge community. This has led to some bearish market conditions, and a less than spectacular rise in the coin’s price following the arrival of the much-touted Wraith Protocol. It's also the second high-profile Twitter-based cryptocurrency controversy this week, following the Ripple leak.

What are the claims being made against McAfee?

There’s a prominent (and wealthy) member of the Verge community who goes by the name XVGWhale. This person reportedly bought large sums of Verge when it was worth very little, and is now enjoying the fruits of its growth. He has since become something of the unofficial mouthpiece for Verge and is influential within the community, carrying 60,000 Twitter followers of his own.

A pinned tweet, which remains at the top of XVGWhale’s account (see top image), shows him with John McAfee at the latter’s house. Whatever good times were had there reportedly went sour. In the tweet below, you can see XVGWhale making the claim that McAfee’s phone wasn’t hacked as he claims. XVGWhale argues that McAfee reversed his support for Verge because the creator failed to pay him US$1.1 million dollars in Ethereum (another cryptocurrency). 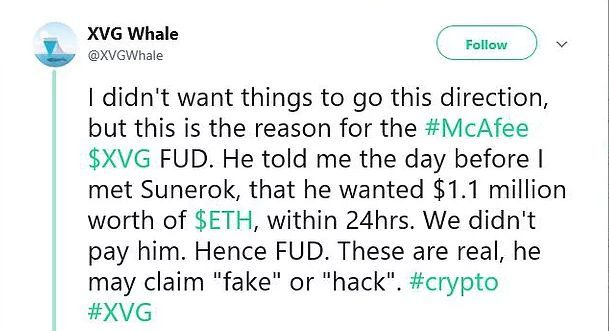 As proof, he also uploaded a number of images seemingly snapped off his phone that depict an alleged conversation between McAfee and XVGWhale. In it, McAfee lays claim to single-handedly increasing the market cap of Verge by US$2 billion and that he should be rewarded as a result. McAfee claims he will bury Verge with negative commentary if he is not paid the money he wants.

From then on, the two have continued to negotiate. McAfee dropped his fee to US$100,000, and XVGWhale offered US$70,000. What’s particularly concerning – assuming these tweets are true – is that McAfee talks of getting cash for comment from multiple other cryptocurrencies, and even calls out a US$23 million deal he has with sether.io. It’s alarming since – if true – it shows clear manipulation of the marketplace based on inaccurate information. 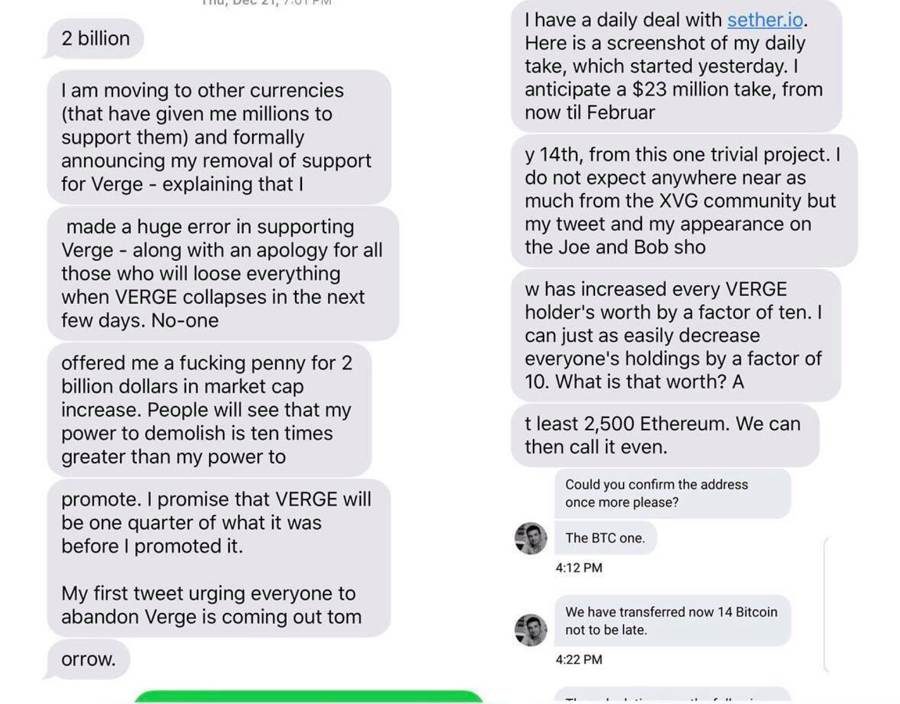 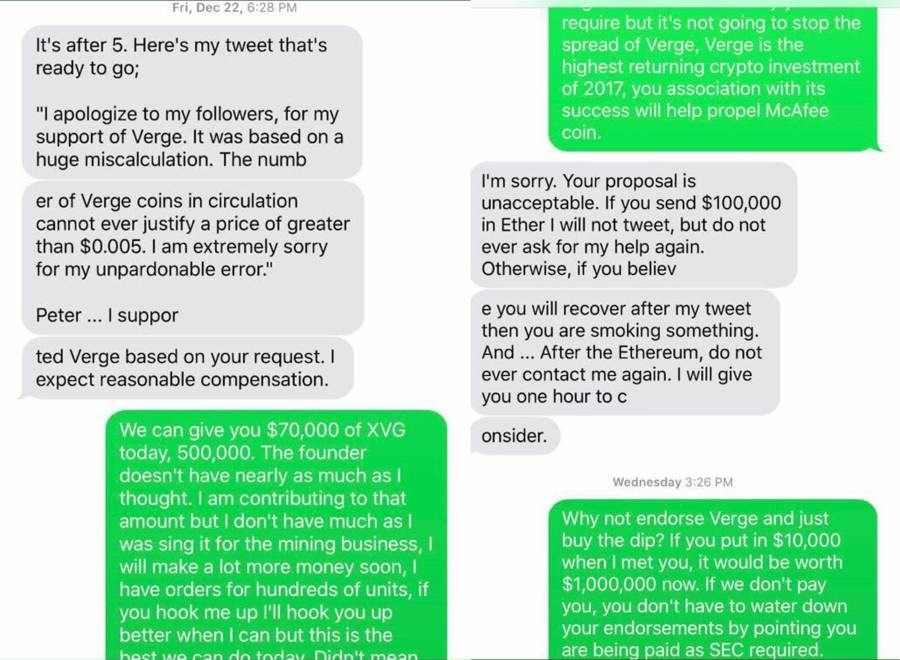 What do the McAfee Verge texts mean?

We’ll likely never know the true story here. Both parties could have been hacked. One party could have been hacked. They could be in it together. It could all be 100% genuine. As neither McAfee nor XVGWhale work for Verge, both could be using their market influence to try and impact the price to their advantage. Sow the seeds of doubt before the Wraith protocol arrives and the price of Verge drops – which is what happened – and the two can buy a bunch of coins at a lower price.

It could effectively be a bear trap, conceived by the two during their party at McAfee’s home. The timing of it is just too convenient for this writer's liking, even if it’s odd that XVGWhale admits to trying to pay McAfee off. If nothing else, this little flare-up serves as yet another warning for rookie traders looking to invest in the cryptocurrency market. Do your research and learn to read the market yourself. Don’t rely on the advice of those with a vested interest in a particular result.

It should be noted that XVGWhale has since taken down his tweet containing the text messages, but not the one where he is partying at McAfee’s house. Hmmmm…. For the record, here is value of Verge over the week in question.

For more on Verge, visit our hub page.