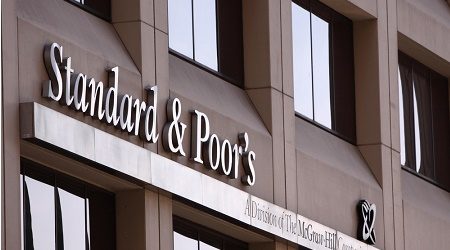 What will that mean for individual credit ratings?

The shift to a negative rating outlook means there's a one-in-three chance of a formal downgrade within two years.

S&P highlighted Australia's growing housing debt as one of the agency's most substantial financial concerns.

The credit rating agency also rejects the government's budgetary iron ore forecasts (US$55 per metric tonne), instead expecting prices to be closer to US$35 a tonne.

S&P also suggests the prospect of the government improving its budgetary performance has weakened post-election.

"Given the outcome of the July 2, 2016, double-dissolution election, in which neither of the traditional governing parties may command a majority in either house, we believe fiscal consolidation may be further postponed," S&P noted in its latest statement.

But the ratings agency has confidence in Australia's big four banks and the Reserve Bank of Australia (RBA), characterising them as "strong".

And while a revised negative outlook is an unfavourable political blow for the Coalition, Capital Economics chief economist Paul Dale says S&P's decision doesn't mean much for the financial markets, the states or the banks.

"Fears that a downgrade will raise the borrowing costs of the Federal government, the states and the banks are overdone. Nor should it weaken the dollar," he says.

NAB's Ivan Colhoun says "even in the event of an eventual downgrade, Australian government borrowers and major banks will remain highly rated on a global basis".

However, AMP Capital's chief economist Shane Oliver suspects a formal downgrade is likely to follow unless the government is able to hold its budgetary line and maintain deficit projections in the face of an unwieldy new Senate.

Just because the country's credit rating is under threat, doesn't mean yours has to suffer. Take a look at our in-depth guide to repairing your own poor credit rating.