Hands-on review: Travelling with a Chromebook 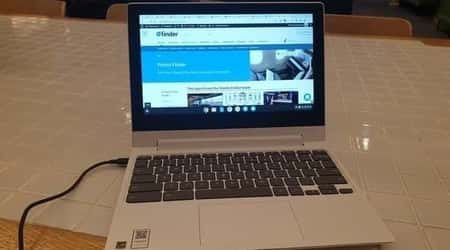 How will a Lenovo 2-in-1 Chromebook perform on the road?

I've been flying for work for over 25 years. During that time I've travelled with every variant of a "travel computer" you can think of. From subnotebooks to netbooks to ultraportables to tablets-with-keyboards, if it's designed to fit in hand luggage, I've given it a whirl on a long-haul flight.

For the past couple of years, my primary "travel" PC has been a slightly ageing Microsoft Surface running Windows 10. It's compact enough that it doesn't stress me even when I'm flying a budget carrier like Jetstar or Tigerair and trying to keep everything under 7kg.

My major beef with that machine is that the kickstand arrangement is awkward to use on your lap, or on a smaller economy tray table. (That isn't the case with the Surface Laptop models.)

Keyboard issues aside, as inevitably happens with any computer, the battery life has also steadily declined over the years. These days it can't run enough for a Melbourne to Perth or Sydney to Singapore trip, even with meal breaks.

So ahead of a planned overseas jaunt that included several all-day conference sessions where battery life would really matter, I decided to hunt around for an upgrade. And after comparing various options, I settled on something slightly unexpected: a Lenovo C330 Chromebook.

Chromebooks, if you've forgotten, are machines that run Google's Chrome OS. This is effectively a way to run the Chrome browser and not much else. Given that most of my work is done through in-browser apps anyway, that's not much of a restriction.

Chromebooks can also now run Android apps through Google Play, something that certainly wasn't possible when I tested them out when Chromebooks first launched in Australia in 2013. Many recent models also function as 2-in-1 devices, meaning you can use them in tablet mode for casual browsing or media watching, then switch back to a full keyboard when you need to be more productive. (My old Surface did this too, to be fair.)

I settled on the C330 for a few reasons. I'm a fan of Lenovo gear, which copes admirably with my insane travel schedules. Reviews suggested the C330 could easily go 10 hours without a charge, which is more than I need.

The processor (a 2.0MHz MediaTek Quad-Core) isn't grunty, but I won't be using this device for video editing or high-resolution gaming. It only has 64GB of storage onboard, but that's enough for offline backups of documents so I can work on planes that don't have Wi-Fi.

The C330 does offer an HDMI port, which is a fairly unusual inclusion for a budget Chromebook that makes it easier to do presentations (or stream in my hotel room). I also picked it up for under $400, which was pleasing to my wallet.

The C330 comes in Blizzard White, but I accepted that risk. Yes, it'll get dirty more easily, but it will also be immediately distinguishable from my existing black Windows machine, a Thinkpad Carbon X1. At that price, you're not getting an ultra-thin model or a fancy bezel, but I'm perfectly happy with its look.

So I'm largely writing this column on my recently-purchased and yet-to-get-filthy C330 while sitting on a Qantas flight between Melbourne and Singapore. It's small enough to whack under my seat in a small bag during take-off and landing. Even if I wanted to take a quick catnap, it wouldn't get in the way. 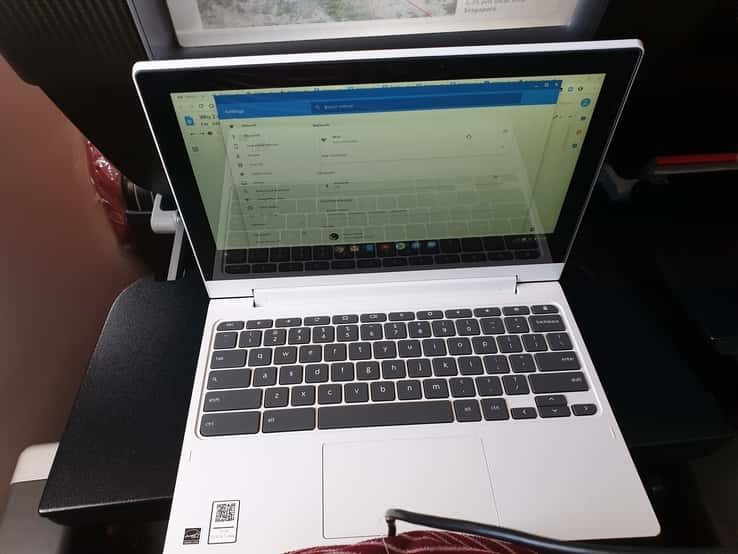 It's already survived the first productivity challenge. The dude in front of me has reclined his seat, but I can still use the Chromebook on the tray table. (On a budget airline, I'd have to revert to sitting it on my lap, but at least that's an option, which wouldn't be the case with a kickstand.)

The keyboard is solid and responsive, and it looks like I'll easily fall asleep before the battery runs out. So far, so good.

My biggest beef so far is that there's no easy way to copy files directly from my phone to my Chromebook using a USB connection. I'll continue to investigate, but it's not a deal breaker, yet.

How popular are Chromebooks in Australia?

While Chromebooks are still a minority choice in the Australian market, 2-in-1 devices generally are taking off. More than 4 million Australians now use one, according to new figures from market research firm Telsyte.

"The slate-only format is rapidly being replaced by 2-in-1s as Australians seek to replace older laptops and tablets with converged touchscreen devices with keyboards," Telsyte senior analyst Alvin Lee said. 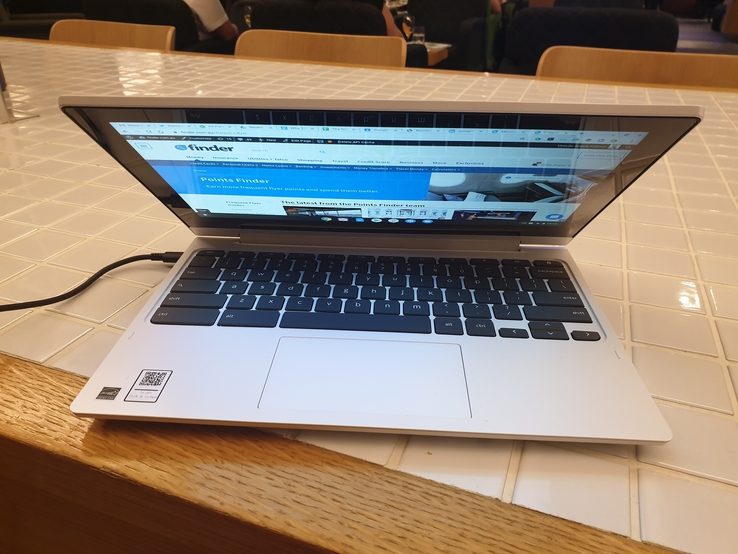 Most are Windows machines (65%), but Telsyte is predicting that Apple's share will grow thanks to the more recent iPad Pro models. Right now, most Chromebooks in Australia are standard laptops, not 2-in-1s, Telsyte tells me, so they haven't made a big dent in that category.

Regardless, the data suggests I'll be holding onto this device for a while. The average "replacement period" (time before you buy a new device) for 2-in-1s in 2.6 years, Telsyte says. For me, the real test will be if the battery life is still over 8 hours at that point.