Aussies could speed dial their savings with a prepaid SIM

18 September, 2019, Sydney, Australia - Aussies are costing themselves hundreds of dollars each year by sticking with unnecessarily expensive phone plans according to Finder, Australia's most visited comparison site.

A Finder survey of 2,085 people shows that the equivalent of 5.8 million Australians fork out $40 or more each month for a SIM-only phone plan.

These Aussies could be saving between $120 and $1,080 per year if they switched to a cheaper plan. As a nation, this represents $669 million in potential savings.

Postpaid SIM-only plans are the most popular option for those who own their own phone outright, with 40% locked into a postpaid plan. While, just 34% opt for a prepaid SIM.

Angus Kidman, editor-in-chief and tech expert at Finder, said that while there are good deals in the postpaid space, fierce competition within the telco industry has led to some highly attractive offers on prepaid plans.

"Prepaid plans have taken great strides forward over the past decade. Gone are the days of heading in-store to purchase credit. You can now recharge online and register for auto top-ups.

"Aside from convenience, prepaid offers excellent value. Some of the 2019 Finder Awards SIM-only plan finalists will set you back just $30 per month, and offer a whopping 30GB of monthly data.

"The no-strings-attached nature of prepaid plans make them a great option for many — they're certainly nothing to be sniffed at," he said.

The research also found that three in four Aussies (74%) bring their own phone to the table when signing up for a plan. A further 26% prefer to choose a phone and plan bundle contract instead.

The iPhone 11: Buy or bundle?
Kidman said that for those looking to pick up the new iPhone 11, paying up front has its perks.

"There are plenty of great phones on the market for $400 or less, but if you have your heart set on the new iPhone, you'll get considerably better value for money if you buy it outright.

"The $1,200 price tag may seem steep when you're paying upfront, but you'll generally get more international minutes and data in the long run if you can sign up to a SIM-only prepaid plan.

"By avoiding a lock-in contract, you can score as much as six times the data and save more than $400 over two years. You'll also be able to plan hop as better offers come to market," Kidman said. 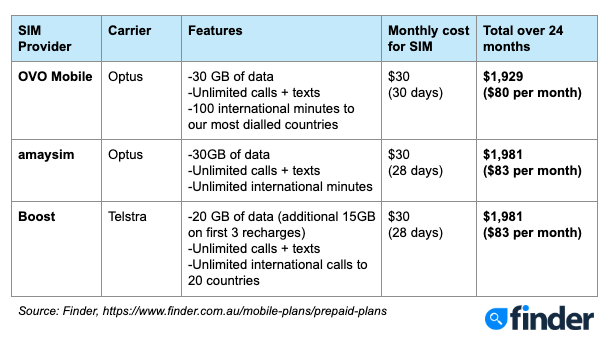 What to look for in a prepaid plan