Be a geek and live in Tasmania: How to win at New Year’s resolutions

December 29, 2015, Sydney, Australia – Technology and living in Tasmania have been revealed as the most likely contributors to success when it comes to seeing through your New Year’s Resolution, according to a new survey by one of Australia’s biggest comparison websites, finder.com.au.

Aside from sharing your resolution on social media and using an app to help you on track, picking one goal only – rather than multiple – will set you on the right path.

The national survey of 1,059 respondents found that 58% of Australians – an estimated 11 million people – broke their New Year’s resolutions this year, with women the more likely to break it (64%) compared to men (54%).

It took just three months for 15 percent of Australians to break their resolutions, while 40 percent had broken their promise by September 2015.

Of those who were unsuccessful, one in four Australians (25 percent) reported failure to keep track of their progress as the factor that led to this outcome. 21 percent of Australians failed because they made too many resolutions, while 15 percent said they forgot about their promise.

Bessie Hassan, Consumer Advocate at finder.com.au, says being realistic in your goal-setting goes a long way.

“Health and money-related goals will again be the most popular as we head into 2016, but the key to sticking with any resolution is to be realistic with what you can and can’t achieve. Don’t take on more than you can handle and, most importantly, put some thought into how you plan to reach your goal.” 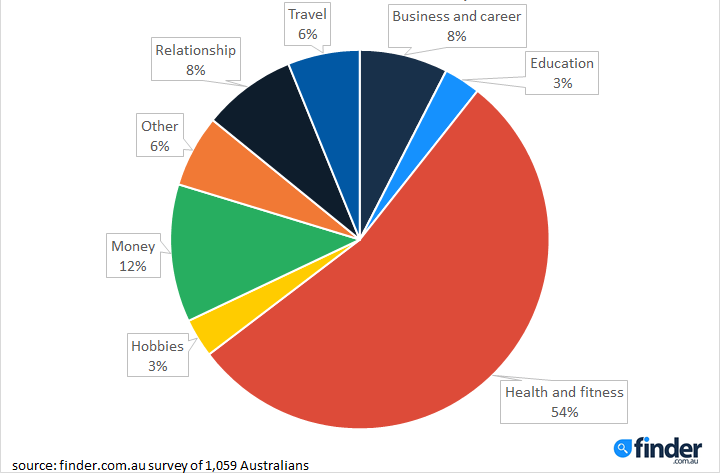 “For example, if you’re looking to boost your health or fitness next year, consider what simple lifestyle changes you can make in your daily or weekly routine. If 2016 is the year you plan to save money towards a personal goal, do your homework and spend some time comparing financial products online to find out what’s on offer to fast-track your savings.

“There’s also help at hand to assist with reaching your goals. Look into free apps to motivate you and keep you on track of your progress, and use social media to share your plans with your friends and family – doing so makes you accountable and therefore more likely to succeed. Good luck.”

Why do we break our New Year's Resolutions?

The survey found that New Years Resolutions were generally broken:

How to keep your New Years Resolution in 2016