Ethereum price stays stable at around US$1,800 despite mounting fee concerns 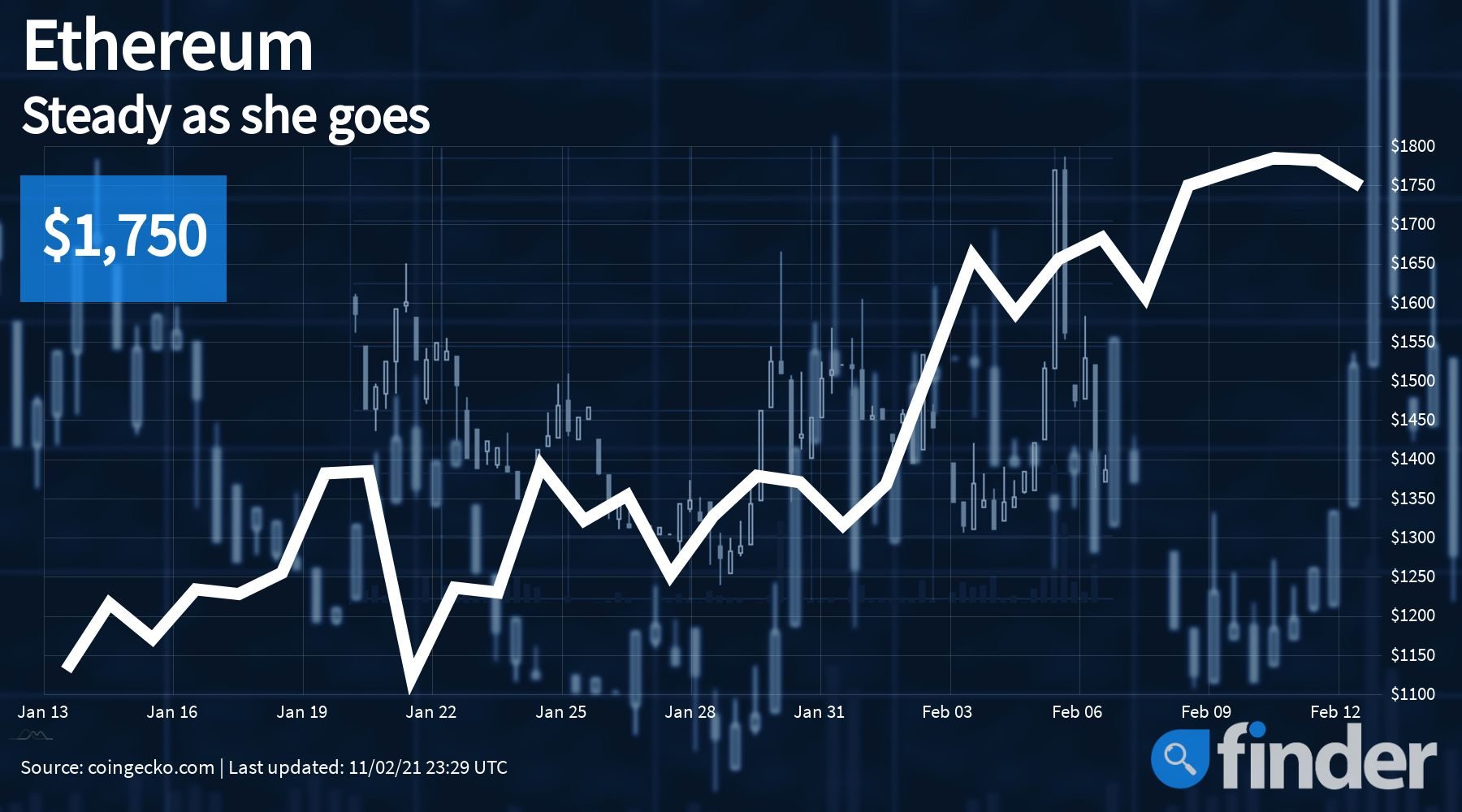 Even though Ether’s value slipped down to as low as US$1,714 over the last 24-hour trade cycle, the second-largest cryptocurrency by total market capitalisation proceeded to make a swift comeback, rising to as high as US$1,809 within a matter of hours. Since then, the premium altcoin has continued to exhibit an increasing amount of stability, currently sitting at US$1,750.

Also, as Finder pointed out earlier, in recent weeks Ethereum’s growing gas fee pains have been mounting quite rapidly, as a result of which yield aggregator Harvest Finance and multi-service platform Value DeFi – two ETH-based DeFi platforms that have a combined TVL of a billion dollars between them – announced their decision yesterday to expand their operations to the Binance Smart Chain (BSC), a smart contract platform that is governed by global cryptocurrency trading giant Binance.

It is also worth highlighting that of late, BSC has been on a roll, with an increasing number of projects – including the fast-growing DeFi solution PancakeSwap – choosing the ecosystem over Ethereum regarding scalability concerns.

That being said, while BSC does offer certain minor short term advantages, à la faster and cheaper transactions, it seems to run counter to the decentralised ethos that has spurred innovation across the Ethereum landscape up until now.

Not only that, some experts have pointed out that as and when BSC becomes popular enough, it too will start to face many of the same issues that ETH is currently being faced with.

While many had predicted Ether to dip quite substantially after the Chicago Mercantile Exchange (CME) started offering ETH futures options – since the same trend was witnessed when BTC futures went live in 2017 – the situation turned out quite differently, as the value of ETH/USD surged dramatically in the aftermath of the event.

This could also have been due to Tesla’s US$1.5 billion investment into Bitcoin as well as the announcement of its plans to accept Bitcoin as payment for its various products. Providing his insights on the matter, Konstantin Anissimov, executive director at CEX.IO, highlighted to Finder that:

“Ethereum accounted for 80% of all fiat inflows into the cryptocurrency space sector during the first week of February. In real term values, this means $195 million of $245 million came into Ether, whereas just $41.9 million was invested in Bitcoin.”

On the subject of why Ether futures did not cause the currency’s value to slide (much like what happened with BTC back in 2017), Vyacheslav Orskiy, senior analyst for cryptocurrency exchange KickEX, highlighted to Finder that the 2017 market was a different world altogether – with the crypto space largely being driven by FUD – and that this time around, that sort of anxiety has no basis, adding:

“There is increased activity of institutional trading participants, compared to 2017, when there were just a few cryptocurrencies interesting enough to draw the interest of investment houses working with classic financial instruments. This time around, ETH has serious fundamental factors that speak in favor of continued growth.”

It is also worth remembering that just a few years ago, BTC, and the market as a whole, was driven largely by the ICO craze. The insane amount of speculation resulted in panic as investors rushed to close their long positions as soon as the price of the flagship cryptocurrency started to exhibit corrections.

At this point in time, the market has matured a lot, with DeFi solutions actively being used by millions of people across the world as well as a total of more than 2.7 million tokens currently being staked on the Ethereum 2.0 deposit contract.

Lastly, in terms of where ETH might be headed in the coming few weeks, Anissimov opined that the way the currency’s fundamentals are looking, he would not be surprised to see the US$2,000 barrier being breached soon.

What lies ahead for Ether?

As Ether’s scalability issues continue to become apparent to everyone operating within the crypto ecosystem, people are now eagerly awaiting the implementation of ETH2.0, which will make use of a concept called "sharding". Simply put, the technology brings together a relatively small number of nodes into one group, i.e. a "shard".

Within this shard, all of the operating nodes are required to process a certain number of transactions that have been allotted to them. As a result, every shard will thus produce a small block of transactions that will be added to the mainnnet block after being verified by a committee of validators. Commenting on the usefulness of this approach, Anissimov added:

“This will eliminate the need for consensus among all nodes of the network. In order to agree on the transactions given to the shard, the nodes will only need to achieve consensus among the ones within each shard. Since all shards will be working in parallel, this will be like a multithreading operation that will ramp up Ethereum's transaction throughput.”

However, the above-stated Ethereum 2.0 switch, which will see the network transition from a Proof-of-Work to Proof-of-Stake consensus algorithm, may take a few years to roll out in its entirety for various security-related reasons. Jan Strandberg, co-founder of DeFi platform Yield.app, told Finder:

“While the change will help drastically, it's still years away. For now, high gas fees will price out a lot of retail users and will slow the deployment of smart contracts by aspiring developers who will likely use cheaper pastures to launch their code.”