How do Australian supermarket loyalty schemes compare with the rest of the world?

Australian supermarket rewards programs are finally catching up to global standards, but Aussies are still missing out.

Are you a Woolworths customer? If so, do you know how its loyalty program works? For established customers it may feel like Woolies, with 961 stores nationally, has had as many new rewards programs over the last few years as Australia has had prime ministers.

Australia’s biggest supermarket scrapped its Qantas-linked Everyday Rewards scheme in late 2015, replacing it with a clunky and complicated new program which gave customers small discounts on specific products. This scheme was savaged on social media and lasted less than a year before also being scrapped.

The new-look Woolworths Rewards program, launched towards the end of last year, is a whole lot simpler and easier to understand. Basically - the system is "spend money, get vouchers". Customers earn one point per dollar spent. Once a customer has accumulated 2,000 points, they automatically receive a $10 voucher. This equates to a return of 0.5% on your spend. Simple.

This program is very similar to what’s on offer from Wesfarmers, owners of Woolworth’s biggest rival Coles (776 stores). Here, customers can also earn one point per dollar and claim a $10 voucher once they have accumulated 2,000 points, resulting in an identical return of 0.5%.

Many international grocery chains have been operating similar schemes for years. So how do the Australian retailers compare to their international rivals? 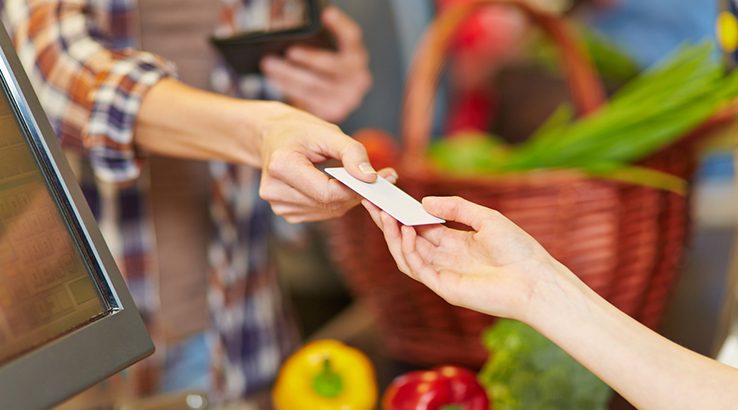 British retailer Tesco’s Clubcard (3,529 stores) has been on the market since the mid-90s. Customers earn one point per £1 spent. Every 100 points are convertible into a £1 voucher - resulting in a 1% basic return, double what’s on offer to Australians. Outside of the supermarket, points can also be spent on a specific restaurant, pub, theme park or family entertainment vouchers, with the value returned quadrupling to an impressive 4%.

Boots chemist in the UK offers a similar scheme, with four points earned per pound. A £250 spend would net you £10 in vouchers - also a 4% return.

On the other side of the Irish sea, Dunnes Stores (112 stores) offers one of the best value loyalty schemes in the world. Under its "Shop & Save" scheme, operating since early 2015, customers receive a €10 voucher into their hand for every €50 they spend on groceries up to a maximum of four vouchers - a huge 20% return. There are a few catches, which are relatively minor. Customers must use the vouchers within nine days, and one €10 voucher is only redeemable per €50 spent. Still, for families making a similar-sized grocery shop every week, this is a massive benefit.

Perhaps surprisingly, Dunnes Stores run a loyalty card scheme on top of this, offering a 1% return - as does its rivals SuperValu (233 stores). California-based grocery retailer Ralph’s (201) also offers a 1% return on basic in-store spends, as do convenience chemist Walgreens (8,175) in the United States.

Even New Zealanders are better off. Woolworth-owned chain Countdown (184 stores) rewards customers with one point for every $10 spent, with 200 points convertible into a $15 voucher - representing a return of 0.75%. 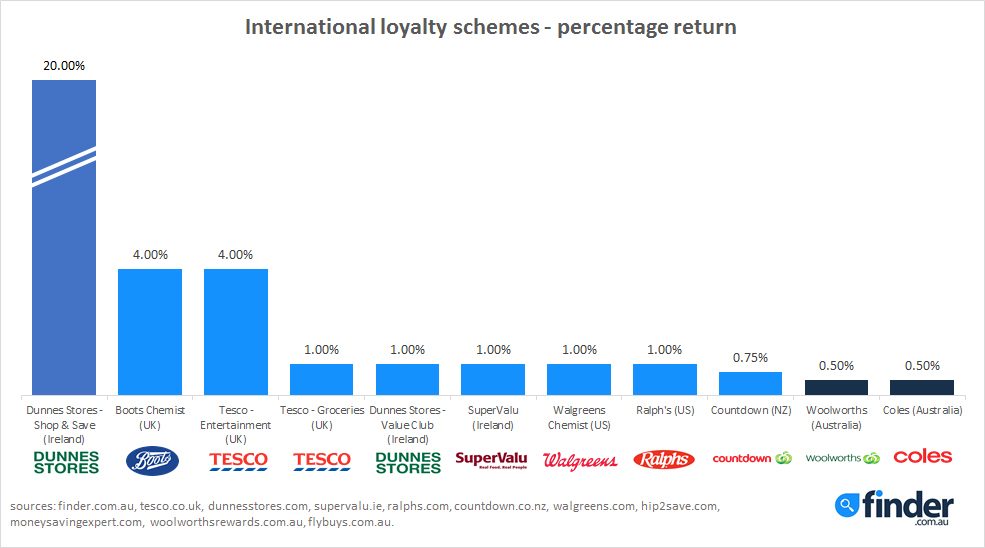 It's worth remembering that there is one clear benefactor if you use your rewards card every time you shop - the supermarket. The retail giants collect huge volumes of data on everything you buy and use this data to try and sell you more stuff. Tesco chairman Lord MacLaurin famously commented to the firm running its first Clubcard in 1994 that "What scares me about this is that you know more about my customers after three months than I know after 30 years."

The insights which can be gleaned from this data run deep. In the US, Target uses similar data for direct marketing - and its knowledge can be surprising. When his high-school-aged daughter started receiving mail with special offers on baby clothes, a Minneapolis father called his local store in a rage. Bemused, the store manager apologised to the customer and followed up with another courtesy call a few days later. On this second call, it was the store manager who received an apology from the customer. The girl in question was, in fact, pregnant, and Target’s automated data-mining system knew about it before her father did.

With fierce competition between the major local supermarket chains, it's possible we'll see a further shift towards higher rates in the future. In the meantime, there’s still value to be had from your spending even if you don’t swipe your card because of privacy concerns. Across both Woolworths and Coles, the 4c per litre fuel discount can be claimed at participating petrol stations if you keep your receipt. Your data is valuable, and unless Australia’s major retailers up their game, it may be a better idea to leave that card at home and aim for the fuel discounts.