Smartphones: The necessity that costs us $9 billion per year

21 May 2018, Sydney, Australia – While Aussies are spending less on their monthly mobile plans, it appears we’re still coughing up big bucks for the pleasure of staying connected – $770 million a month, in fact, according to finder.com.au, the site that compares virtually everything.

The survey of 2,085 people reveals that Aussie adults pay on average $44 per month for their mobile phone plan, down from $48 a year ago. This represents $770 million a month on mobile phone plan payments or $9 billion a year.

One quarter (26%) of smartphone users are on a phone and plan bundle contract, sliding from 36% on bundles in 2017.

Alex Kidman, Tech Expert at finder.com.au, says going BYO phone is the most compelling it’s ever been.

“These days we’re hanging onto the same phone for much longer. While there will always be those who refresh regularly, or who have to have the latest and greatest phone, many of us are happy hanging onto an older model.”

“Back in the day, new handsets were quite pricey, and unless you had a bit of cash, bundles were the only way to get the newest phone.”

“While flagship phones are still over $1,000, there’s an ever-expanding range of affordable handsets that can be purchased upfront,” Mr Kidman says.

“Competition is fierce among telcos and mobile plan pricing is changing so quickly that being tied down for 24 months isn’t your best bet if you want to save.”

“Plan hopping takes a little more time, but if you want to limit your mobile spending, it does work.”

“If you’ve finished repaying your handset but you’re happy to hold onto to that phone, it’s definitely time to switch plans at the very least. The deal you were on two years ago will be much cheaper today.”

The average prepaid subscription is $31 per month – less than half that of a bundle contract which is at $65.

Generation Y spends the most on phone plans, forking out $52, compared to $36 for Baby Boomers. 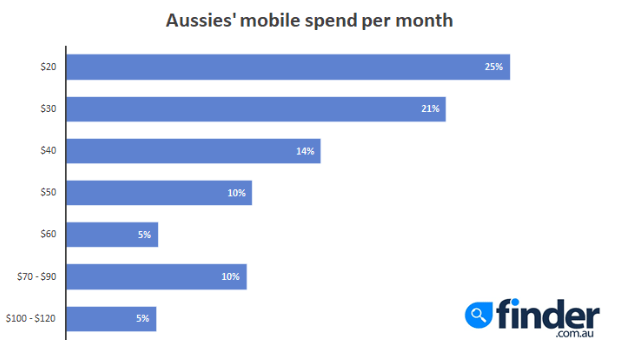 Signs you could be paying too much