5 March, 2018, Sydney, Australia – finder.com.au, the site that compares virtually everything, has developed a new Economic Sentiment Tracker to analyse major Australian economic indicators, with many panellists in this month’s survey showing optimism for both future employment and wage growth.

When evaluating economic indicators, experts and economists from the finder.com.au RBA survey pinpointed wages, business confidence and the local currency as factors that would influence the Reserve Bank’s cash rate decision tomorrow (06/03/2018).

“Despite weak wage growth and below-target inflation, confidence within the domestic business sector is strong so there’s little incentive for the RBA to tweak the cash rate.

“The high Australian dollar is a potential area for concern, as highlighted by the panellists, but it’s not enough to drive a rate change just yet,” he says.

The sentiment tracker will be incorporated into the finder.com.au monthly RBA surveys moving forward. 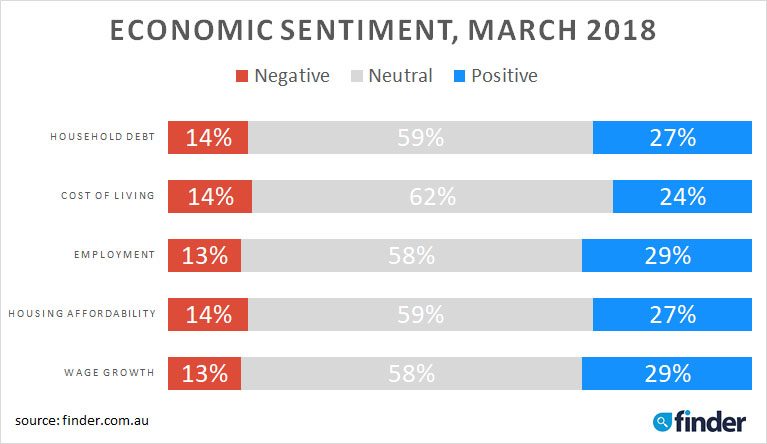 Positive sentiment was given for employment and wage growth, with 29% of experts and economists expecting favourable things to come in these areas.

This month 24%-29% of the panellists had a positive outlook across all five metrics, particularly for the job market.

“If we see sustained growth in these sectors, this may prompt the RBA to issue a rate rise before the year closes out,” Mr Cooke says.

Across the board, negative sentiment was low and hovered between just 13% and 14% for all metrics.

“These indicators are what fuels economic growth and consumer confidence, so it will be fascinating to see how sentiment evolves over time,” Mr Cooke says.

Interestingly, 27% of panellists felt positive about housing affordability in Australia.

With apartment oversupply present in some capital cities, the majority (13) of panellists said
Brisbane has the greatest oversupply. Next in line was Melbourne (9) and Sydney (5).

“Excess stock could dampen price growth so potential apartment buyers should exercise caution before signing on the dotted line.

“If you’re thinking of investing in an oversupplied area, consider areas close to the central business district with good transport links, as these precincts may be more likely to hold long-term value,” he says.

In a landslide vote, all 33 members of the finder.com.au RBA survey believe the central bank will leave the cash rate on hold tomorrow (06/03/2018).

Jordan Eliseo, ABC Bullion (Hold): "There remains no compelling reason for the RBA to move the dial when it comes to interest rates. Employment data, business conditions and overall growth figures are solid, though there seems no obvious catalyst to turn around record low wage growth, whilst a slowing property market will inevitably weigh on confidence. We remain of the view that the next move in rates will be a reduction."

Tim Nelson, AGL Energy (Hold): "RBA has stated that the process of inflation returning to target will be gradual."

Shane Oliver, AMP Capital (Hold): "High levels of business confidence, strong jobs growth and the RBA’s forecasts for stronger growth and inflation point to eventual rate hikes. But against this, continuing very weak wages growth, sub-target inflation, the $A remaining too high and uncertainty around the outlook for consumer spending all argue for rates to remain on hold or even fall. So on balance it makes sense to continue to leave interest rates on hold."

Richard Robinson, BIS Oxford Economics (Hold): "Price and wages inflation still low, so no pressures yet. RBA has a large buffer between rising US rates and local rates, so there is no hurry to raise rates. Although A$ is still a bit high for RBA's comfort, the Bank is still reluctant to cut rates, because it fears it would re-ignite property prices."

Paul Dales, Capital Economics (Hold): "The RBA has said that there is not a strong case for a near-term adjustment in interest rates (i.e. a hike) as inflation is going to rise to the 2-3% target only slowly."

Saul Eslake, Corinna Economic Advisory (Hold): "Nothing has happened since the February meeting (and the publication of the February SoMP) to prompt the RBA to change its evaluation of the appropriateness of current monetary policy settings."

Scott Morgan, Greater Bank (Hold): "Economic data does not yet support a shift"

Alex Joiner, IFM Investors (Hold): "There is no economic reason to shift rates and the outlook has not been altered by any deviation in the recent solid data flow."

Andrew Wilson, Independent economist (Hold): "We are experiencing a benign environment for interest rate movements either up or down. After APRA regulations restricting the availability of loans to investors, we actually saw rates for owner occupier loans fall – the difference between owner occupier and investor loans is now smaller than ever. APRA are starting to make noises that they are satisfied that the market has stabilised. We’re likely to see a flat year for interest rates."

Michael Witts, ING (Hold): "The RBA is happy for the current momentum in the economy to continue to run. Inflation remains under control and wages inflation is yet to emerge."

Leanne Pilkington, Laing+Simmons (Hold): "The current interest rate remains appropriate and the fact that the banks themselves are applying tighter lending criteria to their customers demonstrates the potential impact a rate rise too soon may have. It’s a precarious position requiring a steady low environment in the near term."

Nicholas Gruen, Lateral Economics (Hold): "It has flagged that it's not in a hurry to raise rates."

Mathew Tiller, LJ Hooker (Hold): "No discernible change from last month. Employment continue to remain strong, however, wage growth and inflation remain soft. Property markets have seen prices begin to soften, thanks to an increase in listings and a moderation in investor demand."

John Caelli, ME (Hold): "The RBA has already indicated it will hold the cash rate until key economic indicators improve."

Michael Yardney, Metropole Property Strategists (Hold): "While overseas interest rates are likely to rise in the next few months, the RBA Governor has made it clear that Australian rates don't need to be in lock step with overseas rates. There is currently no reason to change rates to either stimulate or slow down our economy."

Mark Crosby, Monash University (Hold): "At this point the RBA would be close to raising rates, but probably still waiting for overseas rises to occur and monitoring of financial markets after this happens."

Christopher Schade, MyState Bank (Hold): "While the economic outlook has if anything improved in recent times, the economy is far from over-heating, inflation remains well contained, and the Australian dollar arguably remains a tad high. The Reserve Bank will leave rates at their current highly accommodative level for at least the next few months to allow the economy to continue to gather momentum. A rate hike will likely become a more serious consideration later in the year."

Jonathan Chancellor, Property Observer (Hold): "The central bank will be cautiously content with how things are faring, with no need to change the cash rate."

Janu Chan, St.George Bank (Hold): "The next move is more than likely to be higher, and the RBA sees progress towards employment and inflation goals. However, spare capacity still exists within the domestic economy and will therefore hold off from raising interest rates for some time.”