10 June 2020, Sydney, Australia – Australia's average credit card rate has never been this far above the official cash rate, according to new research by Finder, Australia's most visited comparison site.

The standard credit card rate followed a similar trend as the cash rate for a lengthy period from 1991 until 2010.

Graham Cooke, insights manager at Finder, said as the gap between credit card rates and the cash rate grows even wider, credit card customers should shop around for a more competitive deal.

"But that all went out the door from 2010 onwards. "The reality is that at the high end of the credit card market, customers don't care about the interest rate. They are in it for the points, and that's what this data proves."

A potential fly in the ointment for consumers focused on earning frequent flyer points is that the value earned on these cards could be about to fall through the floor.

"Does this mean we're likely to see a drop in the interest rate too? Don't count on it," Cooke said.

Low rate cards
Aside from standard rate cards, the average low rate credit card interest level is also near record highs since the RBA began tracking these cards in 2004.

At present, these cards are 50 times the cash rate, up from only 6.5 times five years ago. 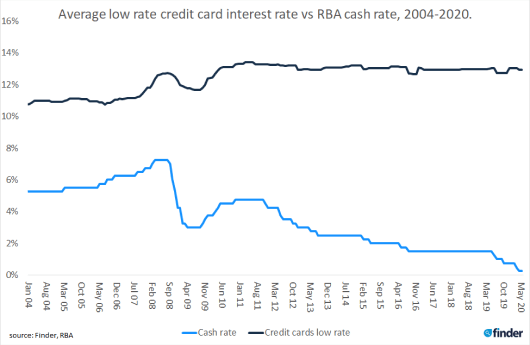